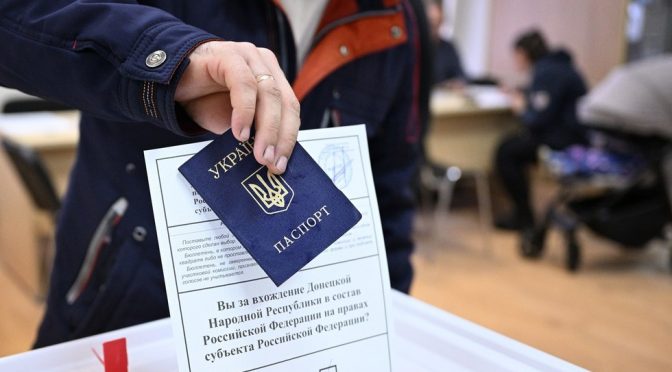 By infusing tens of billions of dollars’ worth of military aid into Ukraine, NATO produced a “game-changing” dynamic designed to throw Russia off balance. By undertaking the referendums in Kherson, Zaporozhye, Donetsk, and Lugansk, Russia changed the game altogether.

The ancient Greeks spoke of lemma as representing a logical premise, a matter taken for granted. This contrasted with a dilemma, or “dual premise”, where one would be presented with an either/or proposition. The Romans furthered this notion, referring to a “double premise” as argumentum cornutum, of the “horned argument,” because by answering one argument, an individual would be impaled by the logic of the second. Thus are the ancient roots of the modern idiom, “on the horns of a dilemma.”

This is the ultimate objective of maneuver warfare, for example: to position your forces in such a manner as to present the enemy with no good option – should they react to one pressing threat, they would find themselves overwhelmed by the other.

The Russian military operation that has been underway in Ukraine for more than seven months now has provided ample examples of the military forces of both sides being confronted with a situation that compelled them to alter their preferred course of action; the Russian “diversion” against Kiev early on in the SMO prevented the Ukrainians from reinforcing their forces in eastern Ukraine, and the recently concluded Ukrainian counteroffensive in Kharkov compelled a hasty Russian withdrawal from a significant swath of previously occupied Ukrainian territory.

Both examples cited presented one side with a lemma, or a single problem, which needed to be addressed. But neither was able to put its opponent “on the horns of a dilemma,” forcing a response which would result in impalement regardless of the option chosen. The reason for this is simple – very rarely will competent military commanders allow themselves to be presented with a military problem for which there is no viable response. War, it seems, is hard work, and dilemmas don’t fall from trees.

Or do they? Ever since Boris Johnston flew to Kiev in April to convince Ukrainian President Vladimir Zelensky to pull out of peace talks then ongoing with Russia in the Turkish city of Istanbul, NATO has embarked on a program designed to provide Ukraine with tens of billions of dollars in military and financial assistance, including the transfer of modern heavy weapons and the use of facilities on Western soil where tens of thousands of Ukrainian troops could be trained and organized without fear of Russian intervention.

The purpose behind the NATO infusion of weaponry into Ukraine was straightforward – to empower Ukraine to not only lengthen the conflict, but also to undertake offensive military operations designed to evict Russia from what Kiev and its backers consider occupied Ukrainian territory, including the Donbass and Crimea. The counteroffensive in Kharkov in early September underscored the serious consequences of NATO’s actions – even though, given the massive loss of life and material suffered by the attacking Ukrainian forces, made the Kharkov victory Pyrrhic in nature, it was a Ukrainian victory, and one which compelled a Russian retreat.

By transforming the Ukrainian army into a NATO army which was manned by Ukrainians, the US-led bloc had, in fact, changed the nature of the game from a straightforward Russia-versus-Ukraine “special military operation” into a “Russia-versus-the collective West” struggle where the military resources originally allocated by Moscow to the fight were now insufficient to the task.

Russia, however, was not taking the game-changing actions of NATO standing still. Responding to the new reality on the ground in Ukraine, Russian President Vladimir Putin opted not to simply up the ante in this new NATO-driven game of increasing military power but change the game altogether. Not only did he order the partial mobilization of some 300,000 Russian reservists to reinforce the troops currently committed to the SMO, Putin also approved referendums in the four territories where Russian forces are presently fighting – Kherson and Zaporozhye (formerly occupied Ukrainian regions), and Donetsk and Lugansk (former regions of Ukraine, de-facto independent since 2014). These referendums asked the citizens of these four territories one simple question: do you wish to become part of Russia?

After five days of voting, the results from all four territories were clear – by an overwhelming majority, the participants in the referendums approved the proposition. Shortly thereafter, they were incorporated into the Russian Federation. What was once Ukraine has now become Mother Russia.

Russia didn’t just change the rules of the game – it changed the game itself. Instead of Ukrainian forces fighting Russian forces on the territory of Ukraine, any future combat carried out by Ukraine against Russian forces would represent an attack on the Russian homeland itself.

Where does this leave NATO? The bloc’s leadership has made it clear from day one that it is not seeking direct confrontation with Russia. While its members have poured in tens of billions of dollars of material into Ukraine to help reconstitute its military, and provided critical logistics, intelligence, and communications support to Ukraine, it has repeatedly and insistently stated that it has no desire to fight a war with Russia directly and has made it clear that it would rather have the Ukrainians serve as a de facto NATO proxy in resisting Moscow.

NATO has gone “all in” both economically and politically when it comes to supporting Ukraine, to the extent that some of its members, having stripped their respective military structures of equipment and material, have nothing left to give. Despite this, European political and economic elites continue to articulate their strong support for Ukraine going forward.

This support, however, was predicated on the fundamental assumption that by providing Ukraine with this massive level of support, NATO would not get directly involved in a conflict with Moscow. But Russia, by transforming the battleground from one being fought on Ukrainian soil to one where it’s now defending its own land, has flipped the script.

NATO, having overcommitted to Ukraine, now finds itself “on the horns of a dilemma” – if it continues to provide massive material and financial support to Ukraine, it will, in effect, become a direct party to the conflict, something no one in the bloc wants. However, if it backs away from supporting Ukraine, the various Western political leaders and institutions which have made support for Kiev a sacred obligation will be seen as going back on their word.

How NATO opts to proceed has yet to be manifest, but indications are that it will not be in a manner which continues to double down on supporting Ukraine no matter what. Secretary General Stoltenberg’s tepid speech condemning Russia while showing no enthusiasm for Zelensky’s “accelerated application” for membership is indicative of the less-than-resolute nature of its support for Kiev.

NATO now will find its role diminished by the consequences of the Russian mobilization and referendums. Years from now, when the history of the conflict is finally written, the decision by President Putin to simultaneously mobilize the Russian reserves while absorbing the territory of southern and eastern Ukraine into the Russian Federation will serve as one of the premier modern-history examples of putting an adversary “on the horns of a dilemma.” The effective neutering of NATO by this action will more than likely be seen as a turning point in the conflict, one which sealed the fate of Ukraine in the face of an inevitable Russian victory.

Scott Ritter is a former US Marine Corps intelligence officer and author of ‘Disarmament in the Time of Perestroika: Arms Control and the End of the Soviet Union.’ He served in the Soviet Union as an inspector implementing the INF Treaty, served in General Schwarzkopf’s staff during the Gulf War, and from 1991 to 1998 served as a chief weapons inspector with the UN in Iraq. Follow him on Twitter @RealScottRitter and on Telegram @ScottRitter