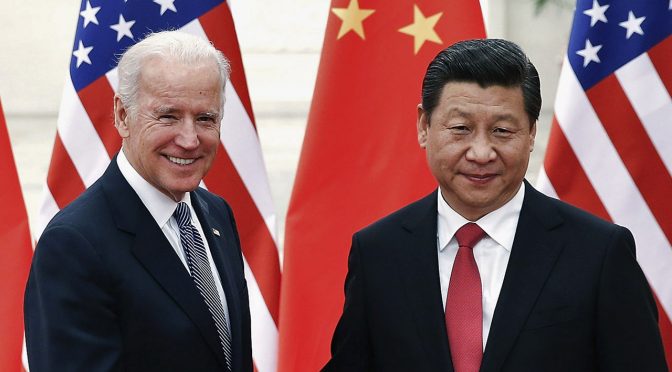 It explains why Washington is so worried about China’s explosive growth. It explains why the US continues to hector China on the issues of Taiwan and the South China Sea.

It explains why Washington sends congressional delegations to Taiwan in defiance of Beijing’s explicit requests. It explains why the Pentagon continues to send US warships through the Taiwan Strait and ship massive amounts of lethal weaponry to Taipei.

It explains why Washington is creating anti-China coalitions in Asia that are aimed at encircling and provoking Beijing. It explains why the Biden administration is stepping up its trade war on China, imposing onerous economic sanctions on its businesses, and banning critical high-tech semi-conductors that are “are essential not just… for virtually every aspect of modern society, from electronic products and transport to the design and production of all manner of goods.”

It explains why China has been singled-out in the US National Security Strategy (NSS) as “the only competitor with both the intent and, increasingly, the capability to reshape the international order.” It explains why Washington now regards China as its biggest and most formidable strategic adversary that must be isolated, demonized and defeated.

The chart above explains everything, not just the hostile diplomatic jabs that are designed to discredit and humiliate China, but also the openly belligerent policies that are aimed at Russia as well. People need to understand this. They need to see what is really going on so they can put events in their proper geopolitical context.

And what “context” is that?

The context of a Third World War; a war that was thoroughly-planned, instigated and (now) prosecuted by Washington and Washington’s proxies. That’s what’s really going on.

The increasingly violent conflagrations we see cropping-up in Ukraine and Asia are not the result of “Russian aggression” or “evil Putin”. No. They are the actualization of a sinister geopolitical strategy to quash China’s meteoric rise and preserve America’s dominant role in the world order. Can there be any doubt about that?

This is why we are experiencing the redivision of the world into warring blocs. This is why we are seeing the roll back of 30 years of Globalization and massive suppyline disruption. And this is why Europe has been thrust headlong into frigid darkness and forced deindustrialisation.

All of these suicidal policies were concocted for one purpose and one purpose alone, to maintain America’s exalted spot in the global system. That is why all of humanity is presently embroiled in a Third World War; a war that is designed to prevent China from becoming the world’s biggest economy; a war that is designed to preserve US global primacy. Check out this excerpt from an article at the World Socialist Web Site:

An October 19 Financial Times article by Edward Luce, entitled “Containing China is Biden’s explicit goal,” sounded the following alarm: “Imagine that a superpower declared war on a great power and nobody noticed. Joe Biden this month launched a full-blown economic war on China—all but committing the US to stopping its rise—and for the most part, Americans did not react.

“To be sure, there is Russia’s war on Ukraine and inflation at home to preoccupy attention. But history is likely to record Biden’s move as the moment when US-China rivalry came out of the closet.”

Moreover, last week, a top Biden administration official indicated that the US was preparing new bans on China in key hi-tech areas. Speaking at the Center for a New American Security, Alan Estevez, the under-secretary of Commerce for Industry and Security, was asked if the US would ban China from accessing quantum information science, biotechnology, artificial intelligence software or advanced algorithms.

Estevez admitted that this was already being actively discussed. “Will we end up doing something in those areas? If I was a betting person, I would put down money on that,” he said….

Luce concluded his Financial Times article cited above by declaring: “Will Biden’s gamble work? I’m not relishing the prospect of finding out. For better or worse, the world has just changed with a whimper not a bang. Let us hope it stays that way.”…(“Biden’s technology war against China”, World Socialist Web Site)

Once again, look at the chart. What does it tell you?

The first thing it tells you is that the hostilities we see in Ukraine (and eventually Taiwan), can be traced back to a fundamental shift in the global economy. China is growing stronger. It’s on a path to overtake the United States economy within the decade. And with growth, come certain benefits.

Can you see the problem here?

For nearly two decades, the US has oriented its foreign policy around a “rebalancing of forces” strategy called the “pivot to Asia”. In short, the US intends to be the dominant player in the world’s most populous and prosperous region, Asia. Can you see how China’s rise derails Washington’s plan for the future?

The United States is not going to let this happen without a fight. Washington is not going to let China muscle-it-out of the markets that it plans to dominate. That’s not going to happen. And if you think that’s going to happen, you’d better think again. The United States will go to war to avoid a scenario in which the US plays “second fiddle” to China. In fact, the foreign policy establishment has already decided that the US will engage China militarily for that very objective.

So, our thesis is simple; we think WW3 has already begun. That’s all we’re saying. The ructions we see in Ukraine are merely the first salvo in a Third World War that has already triggered an unprecedented energy crisis, massive worldwide food insecurity, a catastrophic break-down in global supply lines, widespread and out-of-control inflation, the steady reemergence of extreme nationalism, and the redivision of the world into warring blocs. What more proof do you need?

And it’s all economic. The origins of this conflict can all be traced back to the seismic changes in the global economy, the rise of China and the unavoidable decline of the United States. It is a case of one empire replacing the other. Naturally, a transition of this magnitude is going to generate tectonic changes in global distribution of power. And along with those changes will come more flashpoints, more devastation, and the looming prospect of nuclear war. And this is precisely how things are playing out.

So, how does the chart explain what is happening in Ukraine?

Washington’s proxy war in Ukraine is actually aimed at China not Russia. Russia is not a peer competitor and Russia does not have the economic wherewithal to displace the United States in the global order. NordStream, however, did pose a significant risk to the US by greatly strengthening Moscow’s economic relations with the EU and particularly with Europe’s industrial powerhouse, Germany.

The Moscow-Berlin alliance—which was mutually beneficial and key to German prosperity—had to be sabotaged to prevent further economic integration that would have drawn the continents closer together into the world’s biggest free trade zone. Washington had to stop that in order to preserve its economic stranglehold on Europe and defend the dollar as the world’s reserve currency.

Even so, no one expected the US to blow up the pipeline itself in—what appears to be—the greatest act of industrial terrorism in history. That was truly shocking.

In essence, Washington sees Russia as an obstacle to its “pivot” plan to encircle, isolate and weaken China. But Russia is not the greatest threat to US global primacy; not even close. That designation belongs to China.

The Third World War is being waged to contain China not Russia. What the war in Ukraine suggests is that—among foreign policy elites—there is general agreement that, The road to Beijing goes through Moscow. That appears to be the consensus view. In other words, US powerbrokers want to weaken Russia in order to spread US military bases across Asia. Ultimately, the military will be called upon to enforce Washington’s economic rule over its new Asian subjects. If that day ever comes.

We think it is extremely unlikely that Washington’s ambitious plan will succeed, but we have no doubt that it will be implemented all the same. Tens of millions of people are likely to die in a desperate attempt to turn-back the clock to the fleeting ‘unipolar moment’ and the equally short-lived American Century. It is a tragedy beyond comprehension.

Mike Whitney is a journalist who lives in Washington state, USA, interested in politics and economics from a libertarian perspective. He has written extensively on the Russiagate and COVID-19 coups. He is a contributor to the book Hopeless: Barack Obama and the Politics of Illusion.

One thought on “The One Chart That Explains Everything”