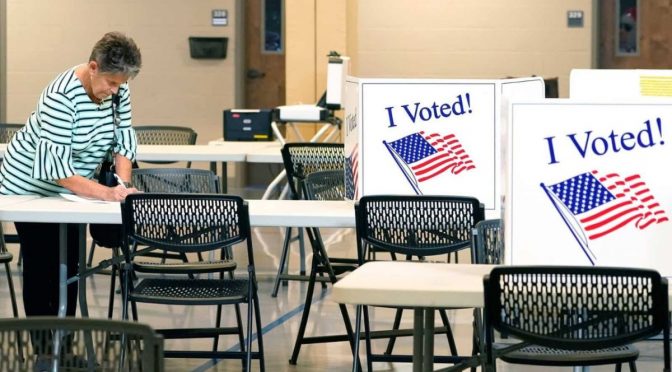 There was supposed to be a red wave that would put the corrupt, entitled, arrogant Democrats in their place.  The GOP was supposed to take the House by an emphatic margin and possibly the Senate, too.

They said it was not a question of if, but when it would happen.

As someone on Twitter rightly observed, at this point, the GOP would be lucky to have a Red Trickle.  Even if the GOP takes the House, it will be by a slim margin.

Joe Biden, despite his catastrophic misgovernance, historic unpopularity, and rapidly declining cognitive abilities, could end up with a better midterm record than Democrat stars such as Barack Obama and Bill Clinton.

There have been various theories on why it went so wrong.

Postmortem analyses are always easy.  You have the results; all you have to do is walk backward and provide reasons.  Had the GOP won in a landslide, the very pundits who are certain why they underperformed tonight would have provided another set of reasons.

Let’s examine some theories that are being put forth.

Did the narrative of the Red Wave seem like hubris?

At times, rosy expectations can be the mother of all disappointments.  The relentless talk of a red wave, which began in conservative media and spread like wildfire, could have had multiple consequences.

Perhaps GOP voters presumed that a victory was inevitable and chose to stay home.  Perhaps Democrat voters, thinking their party needs them in times of peril, chose to vote.

Perhaps some voters thought of this talk of the red wave as hubris.

Voters often do not like politicians taking them for granted and second-guessing them.

Perhaps they decided to give the GOP a reality check?

The overturning of Roe v. Wade?

It will never be easy to gauge what impact the overturning of Roe had on the mind of the public, especially women.

Dr. Oz said, “I don’t want the federal government involved with that at all.  I want women, doctors, local political leaders, letting the democracy that’s always allowed our nation to thrive to put the best ideas forward so states can decide for themselves.”

Oz was making a broader point about law-making by consulting all parties involved.  Most of the mainstream media claimed that Dr. Oz thinks the decision to have an abortion must be among a woman, her doctor, and local politicians.

Perhaps women truly feared that the Republicans would be involved each time they visited the gynecologist.  Perhaps women feared imprisonment for even mentioning abortion.  Perhaps they believed the claim that contraception would also be restricted.

Fear tactics often work, irrespective of whether the claims are factual.

Was it the media?

The mainstream media are the propaganda arm of the Democrats, while most Republicans get their news from Fox News, Breitbart, The Daily Caller, NewsMax, and various other right-leaning websites.

But what about independents?  Perhaps they brought the media narrative that if the GOP wins, there will never, ever be elections in the U.S., and Trump will become a dictator.

End of the Trump era?

Some experts claimed that Trump’s choice of candidates was a major reason for the GOP’s subpar performance.  They cite the loss of Dr. Oz to severely cognitively impaired John Fetterman to demonstrate their point.

They feel Trump incorrectly endorsed celebrity Dr. Oz; perhaps a principled conservative and a Pennsylvania local would have served better.  They claim that the underperforming of the GOP is proof that Trump’s era has passed.  They claim he should gracefully step aside and allow Ron DeSantis to be the nominee in 2024.  They claim Trump lacks discipline, has too much baggage, and polarizes people with his rhetoric.

So what has Trump’s record been so far in the race?

Since Trump descended the escalator in 2015 to announce his presidential campaign, there are many who have been predicting his political demise.  Yet he still remains a force to reckon with in the party.  It would be a mistake to count Trump out this easily.

Beginning of the DeSantis era?

Ron DeSantis was re-elected in Florida by almost 20 points; it was an emphatic routing of his Democrat opponent.

After DeSantis’s victory speech, the crowd chanted, “USA! USA! USA!” and, in a nod to an expected presidential run, chanted, “Two more years!”

The DeSantis wing of the GOP claimed that DeSantis is Trump without the baggage.  They say he is disciplined in his message, he is younger, and he has a proven track record of governance during crises such as COVID-19 and Hurricane Ian.  Hence, he is a much more viable presidential candidate.

They cite winning among minorities to make the case for his broad appeal.  DeSantis is the first Republican gubernatorial candidate since Jeb Bush to win Miami-Dade, the state’s largest county, which also has its largest Hispanic population and was once considered a Democrat bastion.

But does a victory in Florida make him a viable candidate all over the U.S.?

What about the point of having no Trump baggage?  The Democrats may despise DeSantis, but they haven’t gone after DeSantis the way they have targeted Trump.  If he becomes the GOP nominee in 2024, they will give him the Trump treatment or perhaps worse.  They could dig dirt or invent lies about DeSantis — i.e., create a great deal of baggage for him.

Even worse, President Trump just openly threatened to sling mud at him, saying, “If he did run, I will tell you things about him that won’t be very flattering.  I know more about him than anybody other than perhaps his wife, who is really running his campaign.”

What about DeSantis’s endorsements?

DeSantis endorsed Colorado Senate candidate Joe O’Dea and recorded an automated phone call for the campaign, saying, “I’ve watched Joe from a distance.  And I’m impressed.”  O’Dea went on to lose his race.  But Colorado is a liberal state; perhaps O’Dea was going to lose anyway?

In the end, it isn’t pundits or experts who will decide the GOP nominee.  It is the public who will cast the vote.

It has to be remembered that no candidate can win without a minimum amount of funding.  A MAGA victory is as troubling to establishment GOP leaders as it is for Democrats.

It has been documented that for various Senate races, the GOP leadership in Washington — i.e., Mitch McConnell — were not supporting MAGA candidates financially.  Perhaps that played a factor in impeding the candidates from pushing their message and the overall narrative.

Biden signed Executive Order 14019 back in March, asking all 600 federal agencies to “consider ways to expand citizens’ opportunities to register to vote and to obtain information about, and participate in, the electoral process.”

We will never know because Biden refused to share details about its coordinated efforts to engage in a federal takeover of the administration of elections.

This concealment makes it very suspicious.

One thought on “Comprehending the Underwhelming Performance of the GOP”