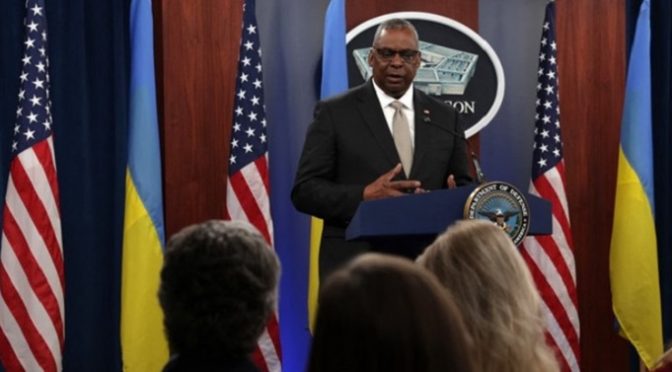 Signs are a plenty that the US military top brass wants the Ukrainian war to end, as soon as possible. The Joint Chief of Staff Gen. Miley himself leaked the sentiment to the media. Even US Defense Secretary Lloyd Austin admitted that Russia has “impressive weapons”.

“You know, the Russians have a massive military and impressive weapons,” but this “hasn’t helped them prevail in a campaign of conquest and cruelty,” Austin claimed, speaking at the Halifax International Security Forum in Canada on Saturday.

According to the official, “it’s about the cause,” as well as “those who fight for it.”

The secretary of defense went on to praise President Joe Biden for rallying “nations of goodwill” against Russia’s attempts to “redraw borders by force.”

Austin also said the US will stand by Ukraine as long as the conflict lasts, insisting that the outcome will “determine the course of global security in this young century.”

He added, however, that NATO will not be dragged into what he described as the “worst crisis in [European] security since the end of the Second World War,” unless Moscow attacks one of its member states.

On the other hand, CIA Chief Burns has gone to talk with his Russian counterpart about “risk reduction” measures, but we think it’s more about striking a good bargain, a face-saving exit plan to ending the provocation that leads to the Russian Special deNazification Operation against Kiev.

The recent unannounced meeting of top Russian and US spies in Ankara was meant to maintain dialogue between two powers, US National Security Council spokesman John Kirby told US media on Tuesday.

Speaking to Bloomberg, Kirby was asked to comment on the talks in Türkiye’s capital, which involved Sergey Naryshkin, director of Russia’s Foreign Intelligence Service (SVR), and CIA Director Bill Burns.

Kirby noted that in recent weeks US Secretary of Defense Lloyd Austin and the Chairman of the Joint Chiefs of Staff Mark Milley spoke with their respective Russian counterparts. By doing so, the US is “making sure that… there won’t be any miscalculations,” the official said.

This is probably why Ukraine’s top general was advised recently to “reduce public profile”, so as not to telegraph any plans to replace the incumbent president Zelensky.

The report comes after rumored tensions with the country’s president, over coverage of the military man’s exploits

Ukraine’s top military commander, General Valery Zaluzhny, has been told to tone down his public persona amid rumors of tensions between him and President Vladimir Zelensky, the Financial Times reported on Friday, citing people familiar with the matter.

The report stated that the chatter about a possible conflict has “swirled in recent months.”

“Both insist this is Russian disinformation intended to stoke tension within Kiev’s leadership. But people familiar with the situation said Zaluzhny had been asked to ease off on building his public profile,” the newspaper said.

As widely seen, Zelensky loves to project himself as a Western cowboy in all international fora that he’s been accommodated with to make a remote presentation of his exploits. Obviously, however, this clown did not impress the big bosses at the military industrial complex.

Instead of rallying the Ukrainians to fight for their country, they are fleeing Ukraine instead. So, to make this sad fact official,

KYIV, Ukraine — Ukrainian authorities have begun evacuating civilians from recently liberated sections of the Kherson and Mykolaiv regions, fearing that a lack of heat, power and water due to Russian shelling will make living conditions too difficult this winter. The World Health Organization concurred, warning that millions face a “life-threatening” winter in Ukraine.

Authorities urged residents of the two southern regions, which Russian forces have been shelling for months, to move to safer areas in the central and and western parts of the country. Ukrainian Deputy Prime Minister Iryna Vereshchuk said Monday that the government will provide transportation, accommodations and medical care for them, with priority for women with children, the sick and elderly.

Vereshchuk last month asked citizens now living abroad not to return to Ukraine for the winter to conserve power. Other officials have suggested that residents in Kyiv or elsewhere who have the resources to leave Ukraine for a few months should do so, to save power for hospitals and other key facilities.

This winter may be a “life-threatening” experience for “millions” of Ukrainians, Hans Kluge, the World Health Organization (WHO) regional director for Europe, has warned. Up to three million Ukrainians are expected to migrate “in search of warmth and safety,” Kluge said on Monday during a press conference in Kiev.

“We expect 2–3 million more people to leave their homes in search of warmth and safety. They will face unique health challenges, including respiratory infections such as Covid-19, pneumonia and influenza, and the serious risk of diphtheria and measles in under-vaccinated populations,” Kluge stated.

The war planners now have enough time to cook up new narratives to massage their impending “temporary” defeat in Ukraine.

In the meantime, here is a list of factors why the military industrial complex [MIC] and its talking-heads in Pentagon and CIA are taking a back seat in their efforts to drag the war on against the Russians:

Realistically, the Collective West knows that it cannot stop the rise of Asia, and its move to spread multipolarity across the continents will make it sure that no new wars for profit and plunder will ever be allowed again. It can only negotiate for better terms of surrender.

Most of all, the Collective West is going bankrupt due to the massive withdrawal of sovereign assets from their vaults that were collectively known as the Global Collateral Accounts, due to the lost of trust of the entire Western controlled and corrupt financial system.

That’s why the EU is moving heaven and Earth to find creative ways to use Russian funds and assets to “rebuild Ukraine”, which is obviously just to create the pretext to steal some country’s asset to benefit themselves from, without really helping Ukraine in this case, as they are claiming to be doing now.

The European Commission is investigating how it might go about confiscating hundreds of billions of dollars in Russian state and private assets, according to a document seen by Politico on Monday. The initiative’s goal is reportedly “identifying ways to strengthen the tracing, identification, freezing and management of assets as preliminary steps for potential confiscation.”

The bloc has its eyes on almost $300 billion in Russian central bank assets currently frozen, plus the assets of Russians on the sanctions list. The European Council last month reminded the Commission that it had been tasked with presenting “options in line with EU and international law” for using those frozen Russian funds “to support Ukraine’s reconstruction.”

That’s exactly the same tactic that the UK shamefully used when seizing the Venezuelan gold bullion stored at the vaults of the Bank of England, while the country is under the worst inflation in its history, and still is today.

The fundamental character of the Collective West being historic plunderers of other peoples’ resources continue to shame its population in the eyes of the world.

With the military industrial complex taking a back seat for the time being, is the Biden administration ready to end its Aid to Ukraine money laundering schemes against the American taxpayers? Word from the grapevine is that the Pentagon is at odds with the White House as far as sending more aid to Ukraine is concerned.

No wonder, the US military and NATO are now having a hard time recruiting new blood into the force, not just because of budgetary constraints and forced vaccination, those two factors present no problem for these warmongers, but also with their highly questionable ethics and morality.

The new generation of young Americans and Europeans would rather videoblog their way out of the ongoing economic recession, or sell some stuffs in Jeff Bezos’ Amazon, than shooting someone abroad because they simply looked different, or that the latter is a “terrorist” fighting for his country’s sovereignty.

If the real patriots of the USA are hell bent on reinstating their constitutional republic, today will be the best time to do it. Not only is the Demonic Cabal bleeding financially and militarily, their “Young Global Leaders” are not performing as expected.

But they should first find a better qualified leader, not from the other side of the same Oligarchy, but amongst themselves. Only then will the rest of the Apathetic America will rise and side with them.

Never underestimate your power as the few committed people to change the US political landscape, and society at large. Indeed, it is the only thing that have ever shaped the trajectory of your country’s 246-year history.

Your enemy is only projecting itself as the biggest monster there is to deter armed dissent, but clearly there are only about 535 of them in DC, who crafted those rules and policies against the very people they’ve sworn to serve.

You can add to that those who dropped hundreds of mail-in ballots in remote ballot boxes to make the point that they can do it, because you’re not doing anything to stop them.

How many bankers there are who continue to manipulate as to who will occupy the White House?

That’s an ongoing illustration of how a few committed people effectively directing where the Americans may go, or what they should do, in the present.

The military itself is obviously tired of waging war abroad, as an organization lead by old men. They would rather use mercenaries to keep the war they’ve instigated from reaching the US mainland, to insulate themselves from any accountability, and field command post obligations.

Why allow them to control your people’s destiny towards dystopia?

Fear is only a state of mind. There should be a point when you stop the thinking and start doing something brave to prove to yourselves as truly the free people of the free world, not because you’re being shown on TV, but because you truly love America so dearly, instead of your own ego.

Your failure to do something today will have grave consequences tomorrow, not only to this generation, but upon the next generations of Americans to come.

As much as possible, the total destruction of Khazaria should not happen to America.