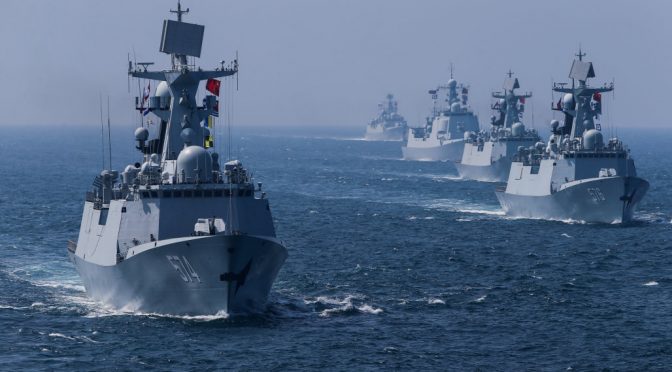 A full undeclared proxy war between China and the United States is now raging around the world and is only going to escalate.  Tariffs and the U.S. blacklisting of telecom giant Huawei was just an opening salvo in a war that could turn hot, multiple sources agree.  The Chinese have already told the Americans, “If you want to talk, the door is open;  if you want to fight, we will fight to the end.”

The biggest battlefield in this war is about to be Southeast Asia, according to White Dragon Society (WDS) sources in the region.  Chinese, American, and Australian warships as well as French fighter jets are now congregating around Indonesia in preparation for major battles when disputed presidential election results are announced on May 22nd, the sources say.

The incumbent President, Joko Widodo, is backed by China and is expected to win by 11%.  He will face mass demonstrations by students and Muslim activists complaining about vote fraud and supporting his anti-Chinese opponent Prabowo Subianto.

Prabowo is married to the daughter of long-term dictator Suharto and was also head of the Indonesian special forces.  Prabowo once warned Singapore founding father Lee Kuan Yew that “Chinese in Indonesia were at risk because in any trouble―riots―they would be hurt as a minority.”*  Already one pro-Chinese general has died from an engineered “monkey pox” virus brought in from Singapore, Asian secret society sources say.  The planned demonstrations “will be attacked with poison gas and bioweapons,” the sources say.

An engineered crash of the Indonesian rupiah and stock markets will further destabilize the Widodo regime, they say.  CIA sources in Southeast Asia agree, and say it might be a good time to temporarily evacuate funds from Indonesia.

The troubles brewing in Indonesia will coincide with a major anti-Chinese push in Laos and Thailand, the WDS source says.  The push in the region will also be against what are perceived to be “fraudulently elected Zionist lackeys,” according to CIA sources in the region.

It’s also a good guess that the “miracle” victory (defying exit polls) by Australian Prime Minister Scott Morrison in a general election over his more pro-Chinese opponent Bill Shorten was “engineered” as part of this general anti-Chinese offensive.

The Chinese, for their part, are not planning to respond with half-measures.  Chinese military intelligence sources have previously told this writer that China has made contingency plans to occupy India, Korea, and Southeast Asia (minus Vietnam) within two months in the event of excess provocations by the Americans.

The airing of anti-American Korean war movies in China is a hint about what the Chinese plan.  For sure, something big is about to happen on the Korean Peninsula, confirm North Korean and Asian secret society sources.  A North Korean source who contacted this writer for the first time in many months says that North Korean strongman Kim Jong Un is intensifying his activities in South Korea.  “Kim has reached a deal where he will be emperor of Korea while [South Korean President] Moon Jae In will be president,” the source says.  U.S. troops in the region will be presented with a fait accompli, the sources say.  Not only that, Kim has ambitions to oust Japanese Emperor Naruhito, the North Korean source says.

This U.S. State Department propaganda “news” report about the arrest of hundreds of “Falun Gong believers” in North Korea provides a hint of these moves.  This is because Falun Gong is a psyop run by Neocon Zionist agent Eliot Abrams, say French intelligence and other sources.
https://www.rfa.org/english/news/korea/nk-falun-gong-05172019164536.html

We are also getting interesting reports about the two Canadian citizens arrested in China for espionage—ex-diplomat Michael Kovrig and businessman Michael Spavor.  “Canadian military intelligence sold these two deep-state assets to the Chinese,” say U.S. military intelligence sources.  This was part of a campaign by the Canadian military against Prime Minister Justin Trudeau, whom they consider to be a “Zionist deep-state asset” working against Canadian interests, the sources say.  It has to do with “dirty trade deals done cheap” by Trudeau, add sources in the Canadian Security Intelligence Service.

The death last week “while running in Yokohama” of 57-year old Eric David Talmadge, North Korea bureau chief for the Associated Press, is also suspicious in these circumstances.  This could be a coincidence, or it may be part of an ongoing purge of Khazarian Zionist agencies who control the slave government of Shinzo Abe in Japan, Japanese underground sources say.

We also got this interesting report last week about funky goings-on in Malaysia:

“One of my Malaysian intelligence contacts told me last week that [disgraced former Prime Minister] Najib Razak is not really in custody as is publicly stated.  He is under a type of house arrest and does travel around West Malaysia as he wants.  He cannot leave the country officially, but “unofficially” he has been seen in Brunei.  There is a way for foreign dignitaries to enter Brunei totally under the radar and he was there last month.  A private meeting was arranged with the Sultan.  I confirmed this with my contact in BSB, Brunei.

“Najib has made a deal with his handlers, the Khazarian Zionist Mafia.  He has all the data on the MH370/17 inside job.  He has it placed in several safe locations.  If he goes to jail and has his offshore assets confiscated, the data is to be released.  I was told that he has at least $5 billion USD parked in Brunei, Singapore, and Hong Kong.  It seems that [Malaysian] PM Mahathir’s hands are tied.”

Despite efforts like this by the Rothschilds to cover up the Malaysian Air Flight 370/17 scandal, it is also coming to a head in Holland.  Already Russia has formally accused the Dutch government of covering up evidence relating to the downing of that flight.  In diplomatic terms, that’s close to a declaration of war.  It’s just a matter of time before this murderous farce is exposed to the world.

Hopefully the liberation of the United States from Khazarian mafia control will be the trigger.  Here, Pentagon sources are now telling us that, “As sealed indictments approach 100,000, Mueller time is over;  time to pay the Barr tab.”  However, we keep waiting for these indictments to be acted upon and want to see action, not talk, on this front.

The sources respond that as a start, U.S. President Donald Trump “may” release Justice Department Inspector General Michael Horowitz and former FBI Director James Comey reports, plus declassify FISA documents before leaving for the UK and France on June 2 to celebrate the 75th anniversary of D-Day.  “D-Day may come to have a new meaning,” the sources say.

Efforts by the Zionists to stave off all these investigations by stirring up trouble in the Middle East are also failing dramatically.  The recommendation by former CIA Operations Officer and U.S. Marine Intelligence agent Robert David Steele that Trump call Iranian leadership has had an effect, the Pentagon sources say.  “Trump may have a summit with Supreme Leader Ali Khamenei which may help in his dealings with North Korea,” they say.

There’s also a huge push by the Pentagon to “shake up the corrupt, wasteful military-industrial complex (MIC),” the sources say.  “As Turkey, India, Iran, China, Syria, Libya, and even the EU get better Russian weapons, a tsunami warning was delivered” to “purge” the MIC and force it to make better products, they say.  Pushing Turkey closer to Russia with the purchase of Su-57 fighters and S-500 anti-aircraft defense “is a bold move to dismantle NATO and weaken Israel,” they add.

The Pentagon sources also seem pretty sanguine about the conflict with China, saying “the China trade war and extreme prejudice against Huawei may be used to nosedive Boeing, with China-led global boycotts, order cancellations, certifications revoked, groundings, and denial of landings and airspace” to force that company to clean up its act.

The Pentagon sources say the U.S. military wants to help “America rid itself of the Zionist parasite,” while Israel is “consigned to pariah status.”

The Polish government has also become a major player in the anti-Zionist movement following attempts by the Zionists to extort $300 billion from that country as “compensation for the Holocaust.”  The Poles have published the Red Cross report on the Nazi concentration camps that claims 271,301 people were killed, not 6 million.  They also have argued that Poland itself was the worst victim of Nazi atrocities.
http://www.klubinteligencjipolskiej.pl/2019/02/

As someone with Polish-Jewish blood, I certainly think it is about time a real, historical, impartial, fact-based and public investigation puts this matter to rest once and for all.  Putting people into jail for questioning the official “holocaust” (burnt offering to Baal) story only creates suspicion.  Truth does not need to hide behind punishment.

In any case, the fact that the Poles are standing their ground is a sign of the growing worldwide backlash against the Khazarian mafia and their Zionist nightmare.

There is also a growing backlash against Khazarian mafia corporate control, the Pentagon sources say.  They note that the landmark Supreme Court case against Apple “paves the way for consumer antitrust suits to force the Department of Justice to break up tech giants like Facebook, Google, Amazon, and even Apple.”
https://www.engadget.com/2019/05/13/supreme-court-apple-app-store-price-fixing-lawsuit/

Also, Monsanto has now lost three major court cases and has been exposed for using special operations against journalists and opinionmakers.  That company and its parent Bayer are learning about the laws of karma.
https://www.france24.com/en/20190519-france-monsanto-bayer-world-wide-march-environment-planet-roundup-glyphosate

Finally, I’d like to end this week’s report with one more bit of good news.  An Amazonian tribe has defeated big oil companies in a lawsuit and preserved 7 million acres of rain forest.
https://www.disclose.tv/amazon-tribe-wins-lawsuit-against-big-oil-saving-millions-of-acres-of-rainforest-367412

Who says the good guys aren’t winning?  The bad guys are losing on all fronts, and planetary liberation is possible in 2019.