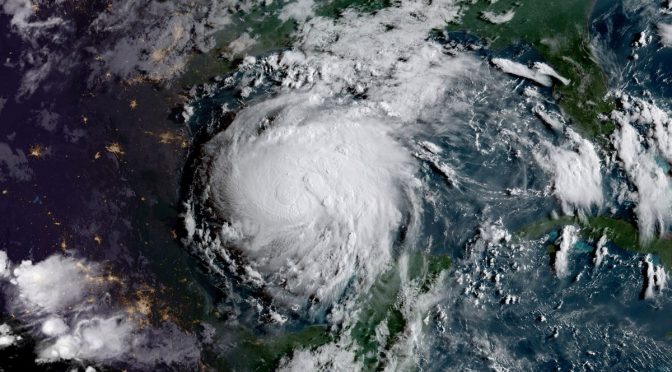 People who are aware are noticing very weird stuff going on with the world information grid -especially inside the Anglo Saxon world- as contradictions and bizarre events multiply. These are all signs of a collapsing power matrix; the sort of thing seen around the time of the fall of the USSR.
The first thing to note about last week in particular is that the US was hit for the first time since 2005 with a hurricane. US President Donald Trump tweeted the code phrase for weather warfare “once in 500 years” to describe Hurricane Harvey. The fact that it hit the Bush clan homeland of Texas, in particular the city of Houston, with devastating floods, makes it likely this is some sort of revenge for the Bush engineered Hurricane Katrina attack on New Orleans.
It may also be related to the fact that 16 US and Canadian diplomats in Cuba suffered brain injuries from some kind of “Sonic attack.” They may well have been hit because of their involvement in cutting of the Bush clan drug money that was being laundered through Cuba. It is also interesting that “Sonic attacks” are now being reported by world media instead of being dismissed as delusions by people “wearing tin foil hats.”

In any case, all of this indicates a high level, esoteric power struggle is continuing.
This power struggle is also being revealed in strange and contradictory news announcements concerning US Senator John “Daesh” McCain. Remember recently we had media reports that McCain had been diagnosed with malignant brain cancer? These were followed immediately with reports that McCain had recovered and rallied the Senate to stop Trump plans to repeal Obamacare. Then after that the USS “John McCain” was rammed by a cargo ship, killing many US sailors. Now we are being told that McCain has been wire-tapping the White House and leaking all of the Trump administrations’ plans to hostile media.

As the oft-used phrase aptly puts it “you can’t make this up,” but then again it looks as if two opposing forces are indeed making this stuff up.
There are many others signs other than contradictory reports about madman McCain to indicate a high level power struggle is raging in Washington DC.
Inside the Trump administration, the removal of Steve Bannon has now been followed by the ouster of adviser Sebastian Gorka. These are the folks who were pushing for a hard line against “radical Islam”(=Khazarian agents) and China.
Now the “make America great again” alt-right faction in the administration is fighting back. Pentagon sources say Trump chief of staff General John Kelly “may be forced to fire globalist democrats Gary Cohn, Jared Kushner and Dina Powell to even the score and appease the Trump base.”
“Jared is under fire for his failure as peacemaker, with no two-state solution based on 1967 lines, while getting no love from Egypt, Palestine, or even Isreal,” the sources note. Meanwhile “Goldmanite Gary Cohn is already under massive pressure to resign, he puts his tribe first, opposes tariffs, supports antifa and the Jewish fake news media in his interview with the Financial Times that made Trump explode,” they add.
There is also incredible pressure being put on the rogue state of Israel. Satan worshiping Israeli leader Benyamin Netanyahu went to visit Russia to warn of Israeli “red lines,” being crossed by Russia allowing Iranian influence to increase in Syria. This was followed up with a massive offensive by the Israeli/Saudi Arabian Daesh proxy army inside Syria. Russia’s answer was to place Iranian and Hizbollah troops right on the Israeli border.

Russian forces also, according to the official Tass news agency “destroyed more than 1,000 facilities belonging to international terrorist groups in Syria in the past week,” thus crushing the Israeli/Saudi proxy offensive.

The oil and gas rich nation of Qatar has rubbed salt into the wounds of the Israeli/Saudi alliance by restoring diplomatic relations with Iran and keeping its money out of Khazarian mafia pockets.

Unlike in the past, the Israelis can no longer run crying to the US for protection because the de facto Trump military government is sick and tired of that rogue states trouble-making. The Pentagon sources say the US military is working with the Russians on this and other issues noting that “Russia supports the US military junta by naming former vice minister of defense Anatoly Antonov as US ambassador, militarizing relations between the two superpowers.”
The Pentagon sources also tried to justify Trump’s recent speech announcing an open ended continuation of the war in Afghanistan as follows: “the Trump Afghan speech is a disguised multilateral exit strategy in concert with regional powers while supporting India in its Bhutan skirmish with China.” However, in this case, the old adage “follow the money,” is a more realistic explanation of what is going on. The fact is that the Afghan heroin trade is, if you multiply UN Afghan heroin production data by the UN calculated US street price, worth around $1.6 trillion a year or more than double the official US military budget.
New whistleblowers are now emerging with detailed, concrete descriptions of how the international drug trade became indispensable to the US military industrial complex in the post-war era. CIA whistleblower Kevin Shipp and investigative journalist Paul Williams provide a very detailed account of this in the podcast at the link below.

What is interesting about what these real world whistleblowers say is that it dovetails almost exactly with what this writer has been hearing from his own CIA and Asian secret society contacts. Real world investigations show beyond a doubt that there is a multi-trillion dollar drug money nexus linking the CIA, the Vatican P2 fascist lodge, North Korea and Asian gangsters.
Multiple Asian and other sources involved in this nexus say they expect some sort of major shift this autumn. This is what a high level source in Thailand, for example, had to say about related developments in that country:
“[Former Prime Minister Yingluck] Shinawatra left Thailand on Wednesday, the 23rd with the assistance of Very High Officials, outside the Junta, in a private jet. She is with her brother in Dubai.”
As background this source noted:

“The King HAD to give permission long before the coup [against Yingluck’s brother Thaksin] took place back in 2006. That allowed certain people time to load the planes with ‘personal’ items like suitcases full of large denominations of cash, the Singapore and Brunei $1000 note, the favorite of the elite as well as a few kilos of diamonds, cut and uncut (Having been a partner in a diamond mining operation in Angola helped). A few tons of Au were added for ballast. Thaksin’s passage was cleared all the way from start to finish. Having a Diplomatic passport made it even faster.”

“The current King has only been seen in public two times. It is said in the inner circles of the Palace that he has AIDS. He flies to Germany two times a month for a blood transfusion… There seems to be more to the extent of his medical treatments than what is released by his closest confidants. The AIDS story could be a smokescreen?”

To conclude, this source notes:

“The future of Thailand and more currently, that of the Junta, will be known within 60 days. What goes down in DC, will directly affect Thailand, in more ways than one.”

The White Dragon Society, for its part, has recently been contacted by representatives of several groups who had cut off all contact immediately following the March 11, 2011 nuclear and tsunami mass murder attack on Japan. These include a senior member of the British branch of the Rothschild family, the top assassin of the Yamaguchi gumi syndicate and a senior MI6 official. They all agree that something big is coming down.
This is partly, but not exclusively, related to the upcoming US government September 30th fiscal year end payments deadline. If we take the right action this time, we can finally stop the criminal Khazarian faction in Washington DC from kicking the can down the road any further. The WDS knows who the secret players still standing are and asks them all for their full cooperation so that we can finally get on with the business of saving the planet.
Please enjoy the last week of summer and get ready for what is likely to be a very eventful autumn.