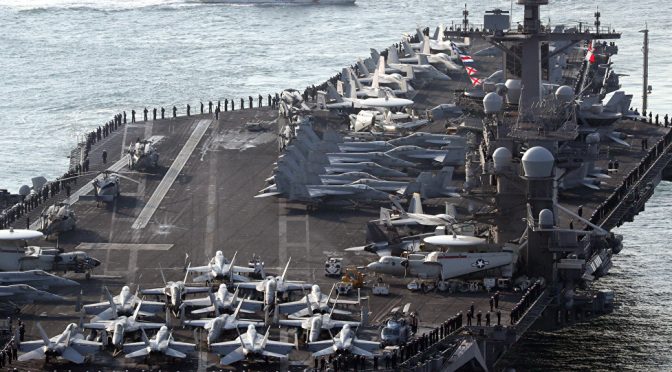 Now that Donald Trump showed his true colours as a Zionist (Khazarian mafia) sleeper agent, he is becoming increasingly isolated and is guilty of provable war crimes, Pentagon, CIA and other sources agree. “Trump is toast,” was how a CIA source described the situation.
by benjamin
April 17, 2017
Trump has been pushed by his Zionist handlers into trying to start World War 3 because these religious fanatics still think they are somehow going to start a war between “Gog” and “Magog,” kill 90% of humanity and enslave the rest. To this end Trump ordered an attack on a Syrian airbase where Russian personnel were stationed. That is also why Trump tried to start a war with nuclear armed North Korea last week.
The situation with North Korea was designed by the Zionists to provoke to ultra-macho antagonists, North Korea’s Kim Jong Un and Donald Trump, into a situation where neither man could back down without losing face. The North Koreans said they had a right to test missiles etc. any time they want, especially on the 105th anniversary of the birth of their country’s founding father Kim Il Sung. Trump said, “if you do that we will attack.”
So, a face saving solution was engineered with a missile that blew up immediately after launching. The North Koreans were able to claim they went ahead and did their test despite Trump’s threats. The Zionists were able to hint they sabotaged the test with unspecified secret weapons. The important point being that Zionist attempts to start World War 3 failed yet again and will continue to fail.
These provocations are just one sign there is something undeniably dysfunctional going on with the Trump presidency. A few weeks ago Trump was invoking President Andrew Jackson and hinting about nationalizing the Federal Reserve Board. Now he is saying FRB chief Janet Yellen can have another term in office. He also turned from provoking the Chinese and accusing them of being “currency manipulators” to brazenly sucking up to them and denying they manipulate their currency.
These flip flops may be connected to the arrival of yet another bankruptcy deadline for the United States Corporate Government, in this case the expected Bankruptcy of the US Corporation’s Puerto Rico subsidiary on May 1st. Despite efforts to paint this as a municipal bond type problem, this could trigger a domino effect that finally takes down Zionist central in Washington D.C.

Sources close to the Japanese emperor say the arrival in Tokyo this week of P2 Freemason lodge and Vatican representive US Vice-President Mike Pence, as well as long term Rothschild agent and US Commerce Secretary Wilbur Ross was for the purpose of trying to get money from Japan to kick the can down the road yet again for the U.S. corporation.
There is also a group calling itself a ‘Goldman family’ that is trying to convince the Emperor to either cash fake bonds with astronomical numbers on them or else place there man Ichiro Isaiah as Prime Minister of Japan the sources say. Neither of these things is going to happen.
The sources add while it is certain the Republic of the United States of America will get continued support from the rest of the world, the Zionist owned U.S. corporation will not.The entire planet is sick and tired of their antisocial and criminal behavior.The signs of this are everywhere to be seen now.
Getting back to Donald Trump last week after trying to start World War three he was forced to say ‘we are not going into Syria’. He has also been denied a meeting with the Pope during the G7 meeting in Sicily scheduled for May 26 and 27, a sure sign he is isolated, Pentagon sources say.Japanese Prime Minister Shinzo Abe, who was also recently denied a meeting with the Pope yet again, exposed himself as a Zionist slave last week, when he talked about North Korea sending sarin missiles to Japan.
Israel has been exposed as behind the false flag Syrian attack along with former CIA boss John Brennan, John McCain, HR McMaster working for their Saudi and Israeli masters, Pentagon sources note.
Zionist bad boy Jared Kushner may be under counter-intel investigations for his ties to BiBi, Benjamin Netanyahu, Russia, George Soros, Goldman Sachs, Henry Kissinger and Rupert Murdoch, the sources add.
This article about Trump’s Zionist handler Kushner, shows his real agenda:

It notes Kushner’s involvement with the college based Chabad was a particularly important part of his resume building and that the Chabad Lubavitch sect is an extremely radical organization that espouses dogmatic and time prophecies that are overwhelmingly favorable to the Jewish race. Kushner is also almost certainly a Satanist because why else would he pay three times the previous price to buy a building with the address 666?
Japanese military intelligence for their part say the real source of the problem is the Satanist controlled CSIS think tank in Georgetown University and suggests taking out that institution as a shortcut to ending world terrorism.
For now though Goldman Sachs is the one that is being targeted, Pentagon sources say noting that Goldman made a huge bet so it could rake in profits from higher oil prices and got busted with no invasion of Syria.
Trump is also guilty of war crimes for his attack on Syria since he attacked a sovereign nation without congressional approval or approval of the United Nations violating the war powers act as an impeachable offense, CIA sources note.
The pretext for this illegal attack a supposed sarin attack by the Syrian government has now been fully exposed as a complete fabrication an interview with Syrian President Bashar Assad by the French AFP news wire was widely quoted in corporate media outlets like CNN, Bloomberg, Reuters etc., and makes clear even to the few remaining Zionists kool-aid drinkers out there that the entire Daesh sarin terrorism business is run by Western powers. The interview can be read at this link

The West was not supposed to represent perpetual war false flag attacks, fake news, terrorism, drug dealing, etc. The West I grew up in and represented by my father as a Canadian diplomat is supposed to stand for world peace, democracy, human rights, Free Press, ending poverty, protecting the environment, etc. This is what it will revert to once the terrorist sponsoring Zionists or khazarian beast is finally put down.
Pentagon sources note, the big three China, Russia and the USA, are cooperating on North Korea, Syria the Ukraine and Daesh to usher in the global currency reset.
Part of this effort is a continued campaign to cut off the supply of drug money to the Zionists and to Khazarian mafia to this end they say. A CIA complex in Afghanistan was nuked to stop drugs trafficking. US troops were also sent to Somalia for the first time since 1994 last week to stop Daesh and Israeli infiltration of East Africa, the Pentagon sources say.
It is also worth noting the Khazarian efforts to keep up the fake Cold War with Russia are fading and that the G7 refused to impose any sanctions on Russia despite Zionist inspired efforts to make this happen.
Instead the fact that Easter came on April sixteenth for both Western and Orthodox Christianity is a sign a new age of peace and prosperity.
The key to this is to remove from Khazarian hence their last and biggest source of power that being their control of the process of creating US dollars yen and euros out of thin air.
Henry Kissinger is the man with the master codes that allow this currency magic to take place which is why he is the most hunted man on earth if he is not killed or captured.Then the system needs to be shut down and rebooted.
Rest assured the bad guys like Kissinger are all being taken down. George Soros John Kerry, David Rockefeller, Barack Obama, Hillary Clinton, Bill Clinton, etc., are vanishing from public view.
Now we have also had the first of the long-awaited arrests of US government officials on charges of treason. In this case former Hillary Clinton State Department Employee, Candice Marie Clairebourne was indicted on treason charges that is to say taking bribes from the Chinese to provide them with US state secrets. Prosecutors say this will be the first of many who will be brought to justice.

Removing the rot from the system is vital but we also need work on fixing the planet to this end. The White Dragon Society will hand deliver a letter next week to a person not Kissinger who has the key to start the concrete here now process of turning this planet into a paradise. We hope to hear a positive response.
However, changing the direction a planet is moving in is like turning a supertanker around at sea it has to be done in such a manner as to not tip the ship over that is why we are not giving any specific dates for an announcement.We are sure though that the good guys are winning and humanity will be liberated.