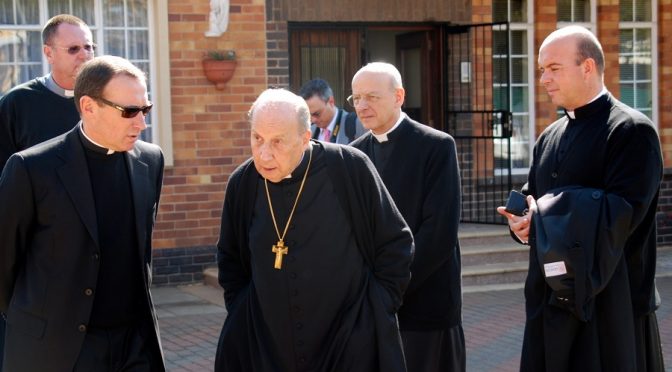 by benjamin
December 19, 2016
The collective story by which humanity has been herded into the future is undergoing a pole shift, and the old reality is fading rapidly. The story by which the world, especially the Western world, has been living in was one of a never ending war on terror and an engineered clash between Islam and Christianity. The mass murdering criminals whose “social engineering” has perpetuated this story are being hunted down and killed or else are under house arrest or in hiding.
One of the most senior members of the cabal behind the atrocities in Syria and elsewhere, Bishop Javier Echevaria, the head of the fascist Opus Dei Vatican organization was killed last week after he tried to overturn the election of Donald Trump as President of the United States, Pentagon sources say. The Vatican says he died of natural causes.
Three independent sources, one CIA, one Pentagon and one bloodline are also saying that David Rockefeller and Nathaniel Rothschild, the respective bloodline leaders of the US and the EU were also killed last week. No confirmation of this has been obtained, as of the time of this writing from either the Rockefeller or Rothschild families.
The sources also say the Clintons, the Bushes, Senator John McCain and many other cabal leaders are under house arrest and are only allowed out under carefully chaperoned circumstances pending their war crimes trials.
We certainly hope these trials will materialize but in any case it is very clear that the people who have been running the planet (especially the West) until now are in a state of deep panic.
Part of the reason for the panic is that an updated membership list of the committee of 300, the secret government of the West, has been made public.
http://worldtruth.tv/illuminati-leak-current-membership-of-committee-of-300/

The fact is that even if these people are now backing away from the never ending war on terror scenario and are instead pushing for a global carbon tax, they have been so incompetent at ruling this planet that they have provoked a mass popular uprising against their rule. This tweet, on an account allegedly put up by AnadeRothschild, captures the sentiment: “Pat Taylor ‏@PT_Fino 11月29日 @AnaDeRothschild I’d like your entire bloodline to be executed on live TV. Call me old fashioned.”