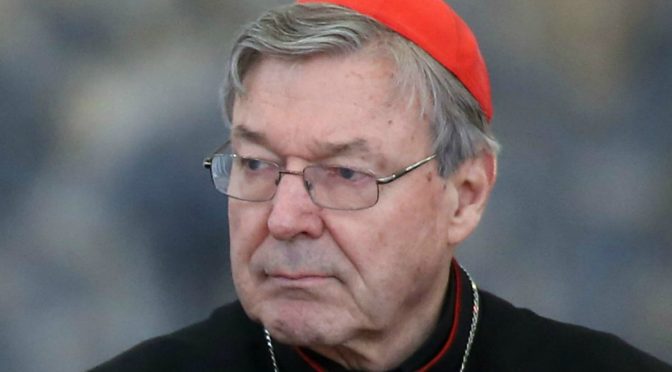 Last week Cardinal George Pell was found guilty of sexually abusing children by an Australian court and was subsequently fired by Pope Francis because he was “elderly.”
https://www.americamagazine.org/faith/2018/12/12/cardinal-pell-top-advisor-pope-francis-found-guilty-historical-sexual-offenses
This is huge news in the secret world of finance, because Pell was the person in charge of financial matters at the Vatican and thus was a secret controller of most world government leaders, P2 Freemason and CIA sources say.  This is because when most world rulers take power, they get a visit from an official of the Vatican Bank who hands them a bank book with an astronomical number written in it (a billion dollars or more for big countries;  less for smaller countries).  They are then told, “Welcome to the world of the rich,” and are gently reminded that if they refuse to accept the money they will be “removed.”
This is the choice of silver or lead that has allowed the Vatican P2 Freemason Lodge, run by descendants of the Caesars, to secretly rule most world governments.  The 200 leaders who last week affirmed the fraudulent “carbon causes global warming” agreement are all slaves of this system, P2 Freemason and CIA sources agree.
https://www.vox.com/energy-and-environment/2018/12/14/18139402/cop24-climate-change-katowice-poland
Thus, the removal of the head of this secret control system will have huge repercussions for world finance and politics, depending on who is selected to replace him, and also depending on whether or not this secret system will be allowed to continue.
On that front, another huge news item (still not fully confirmed because it only comes from one royal family source) is that a new head of the Committee of 300, the secret government of the 13 ruling bloodline families, will take power next year.  This means Queen Elizabeth will be handing the committee reins to a younger person (hint:  not Charles and not William).
With this caveat in mind (i.e., only one source), here some excerpts from a statement by the soon-to-be-appointed new committee head:  “The 13 ruling bloodlines and I have had enough of this world and the minions charged with its curation.  All Sovereign Heads of State and all respective governments fired.  Ordo ab Chao.”
The source also said, “Sir Alexander Younger at MI6 is already briefed, along with the Queen in London and the Emperor in Tokyo,” about this development.
The statement further read that, “The Habsburg dynasty and spin-offs—most criminally psychopathic—have a lot to answer for in the many hundred years of genocide in population reduction come hell or high water. Omnicide is a crime against both humanity itself and all other living ecosystems.”
The Habsburgs, by the way, claim to be descendants of the Caesars and are thus part of the family dynasty that controls the P2 Freemasons, the Vatican, and many so-called world leaders, P2 sources say.
The statement further reads that, “The thirteen ruling bloodlines need to switch to bigger army diplomacy to clear out the rot—a bully is a bully, big or small—so we can all live in peace and quiet and take back the past, present, and more importantly the future that belongs to us all.”
The source also said it was the Committee of 300 that was backing the new Quantum Financial System, which Pentagon sources independently have long been telling us is set to replace the current system.
Here is the source’s description of the new system:

“The quantum system—recursive complexity-based central banking—to replace stochastic equilibrium or manual rate setting—covert stealth state capture—is a complex subject, but essentially it requires quantum computing to analyze the state and outcome of each domestic economy in isolation and in symphony, and to then moderate the supply and demand of currency, which will be all electronic.”

The source also says that this system would be able to help finance and plan a massive campaign to stop environmental destruction and end poverty. However, until we actually see such a system be publicly announced and until we see a huge campaign to save the earth, we need to keep up the pressure on the global elite.
It is interesting to note, in this context, that the Black-Sun-worshiping P2 Freemasons are seeking to remain in power by cashing a “500 dodecallion” U.S. dollar bond. A photo of it can be seen here: 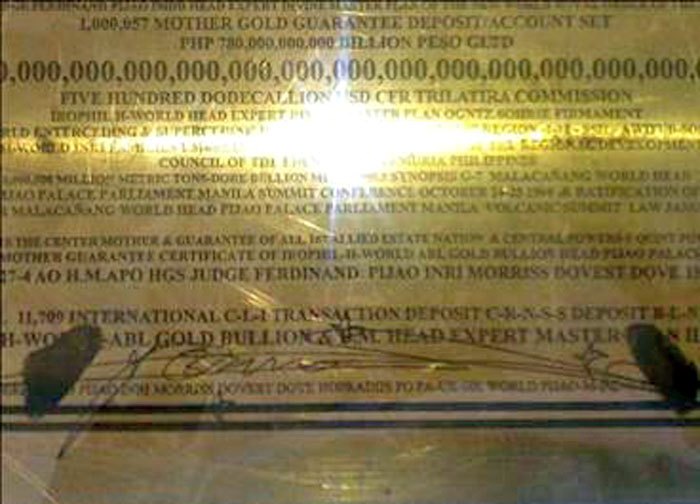 https://beforeitsnews.com/v3/alternative/2015/3141504.html
They want to cash it in order to finance an escape from this planet that they have been destroying. Instead, they will be facing long-postponed justice, according to Pentagon sources.
The Pentagon sources say that, “In preparation for the military tribunals in January of 2019, White House Chief of Staff General John Kelly is leaving to focus on the pain phase, while still having the ear of [U.S. President Donald] Trump as a senior adviser.”
Those who still think this is all talk and no action are not paying attention to events already happening in the real world. The funeral of George Bush Sr., for example, provided somebody with a chance to serve senior members of the Bush/Clinton faction with legal notices, as can be seen in the videos at the links below:

https://www.youtube.com/watch?v=n7poU0sUD40
CIA sources are saying that these legal notices were related to 9/11 and other crimes by this cabal faction. Also, in case you missed it, the U.S. Attorney for the Southern District of New York has agreed to convene a grand jury to look into the criminal destruction of the World Trade Center buildings on September 11, 2001.

We also saw testimony at the Oversight and Government Reform Committee of the U.S. Congress last week that made it abundantly clear the Clinton Foundation was a giant criminal enterprise that exchanged government favors for bribes. While the aware part of the public has known this for a long time, when it becomes formal testimony on the record of Congress, you can be sure that legal action is not far behind.

Pentagon sources are also now saying the “arrest of Huawei’s Chief Financial Officer is a warning sign that executives of Western corporations like Goldman Sachs and Deutsche Bank who commit fraud or crimes may also face Interpol red notices and prison.”
Then there is an ongoing roundup of Israeli arms, drugs, and sex traffickers in Latin America, Africa, and elsewhere:

Khazarian mafia leaders who are still clinging to power remain under intense attack. Rothschild-slave President Emmanuel Macron’s besieged government resorted last weekend to shutting down the Paris subway network and (geo)engineering a massive rainfall to handicap anti-government protests. However, protest leaders vowed they would be back in January after a Christmas break. Pentagon sources add that “Macron’s days are numbered, as French generals accused him of treason for signing the UN compact on migration.”

Also, we are now seeing reports that Fethullah Gülen, the probable head of the Sabbatean mafia, is to be extradited to Turkey. Putting Gülen on trial would reveal all sorts of dirty secrets, including likely testimony about the Zionist plot to start World War III.

The criminal regime in Saudi Arabia also is under heavy attack. The U.S. Senate passed a resolution condemning Saudi leader Mohammed bin Salman as guilty in the murder of journalist Jamal Khashoggi. Then, funding for Saudi Arabia’s war against Yemen was cut off. Finally, the U.S. and Iran, through proxies, forced Saudi Arabia to accept a ceasefire in Yemen, and thus hand over de facto control of that country to Iranian proxies.

Also, Russia has forced the rogue regime in Israel to stop its attacks on Syria by threatening retaliation.

This means the rogue state of Saudi Israelia is finally being forced to stop its perpetual warmongering.
Also, speaking about warmongering, the Chinese have started negotiations with Pakistan and Afghanistan to end the perpetual war in that region, as the U.S. has lost all credibility there.

Another serious issue for the Khazarian mob is that their habit of remote-controlling and crashing airliners is blowing up in their faces. A CIA source in Indonesia said the recent Lion Air crash there “is going to morph into something big….The owner of Lion Air, Mr. Rusdi Kirana, knows what really happened. He is very careful with his words. The Boeing Company for sure knows that Flight JT610 was remotely hijacked. The release of the truth will bring the airline industry to its knees. The Zionist cabal cannot allow the truth to come out. The good news is, that the truth will be released, and the Zionist cabal and their agents will be snatched up.”

Finally, last week Ireland experienced what may have been the first shot fired in an armed rebellion against the banks. A mob attacked armed bank guards who had evicted a family from a house they had been living in for three generations. Eight vehicles were torched, and the bank guards, who were attacked with baseball bats, were told never to come back.