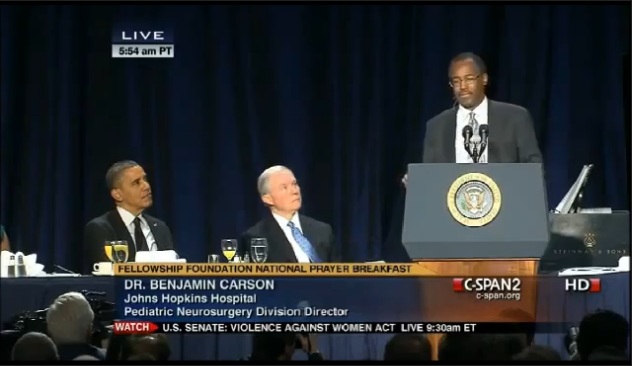 For those whose mindset have gone beyond politics already, this may come as irrelevant. But we can still look back to this day when even within that outdated system of politics and religion, there are those who would rise to the occasion and try making the best out of it.

We can’t be accused of racism for this one comes from a better black president if only swift sweet speeches translate to swift sweet actions.

A neurosurgeon from Johns Hopkins, Dr. Benjamin Carson unleashed a vivid description of the current state of affairs of the nation to the audience, especially the lawyers in the room including the Obamas who were guests at the Fellowship Foundation National Prayer Breakfast, two or so days ago, and in the case of the president, should be responsible for providing the solutions being sought.

Among the issues he raised were the following:

You will be amused how the First Couple, nay the First Lawyers, reacted through their body language, to this speech.

We just learned a crash course on how to slap a president, left and right, without raising a hand.

What happened to Obama in that occasion is akin to what happened to Bush Jr. when a shoe projectile was thrown in his direction while delivering a speech years ago. At least, he was able to dodge it; Obama, on the other hand, couldn’t do anything except wish for a blackout.

Previously, rapper Lupe Fiasco did the same thing his way but it wasn’t his party.

“And these the same people supposedly telling us the truth
Limbaugh is a racist, Glenn Beck is a racist
Gaza Strip was getting bombed, Obama didn’t say shit
That’s why I ain’t vote for him, next one either
I’m part of the problem
My problem is, I’m peaceful”

We wouldn’t have the aforementioned problems if we only use Common Sense even when it’s not politically correct. We could even ignore politics altogether if all restrictions to resources are taken down.

The control mechanism may have worked at that time when most people have yet to figure out the best way to intercourse with society. But now that we have attained a certain level of awareness, the control mechanism called government and religion may have outlived their usefulness.

In fact, mankind may have acted differently, nay even better, if those control mechanisms were not erected in the first place.

There is huge correlation between the behaviors of any animal to its environment, i.e. when living in abundance the animal tends to behave well, but when deprived of the things necessary to sustain a minimum of comfort, the ability to think suffers.

Like I said, we could look back to this day when everybody, except the lazy, seems to be revolting in any way they can, even at the turf of the wicked.

We are very grateful for Carson and Fiasco for standing up, i.e. for speaking [or singing] their minds even when it was not politically correct.

You can join the fight against the Dark Cabal and accelerate its demise just by boycotting Big Pharma. You can effectively do this by downloading “Towards Healthcare Emancipation“, a fully illustrated do-it-yourself instructional eBook that will help you in implementing all eClinik methods that would negate the use of expensive medicine, avoid radioactive diagnostics and treatments in decisively defeating cancer, AIDS and all other parasitic diseases. These methods, when faithfully followed, work 100% all the time. Find out more about this here.

Here’s the rest of the lyrics…

[Lupe Fiasco]
I really think the war on terror is a bunch of bullshit
Just a poor excuse for you to use up all your bullets
How much money does it take to really make a full clip
9/11 building 7 did they really pull it
Uhh, And a bunch of other cover ups
Your child’s future was the first to go with budget cuts
If you think that hurts then, wait here comes the uppercut
The school was garbage in the first place, that’s on the up and up
Keep you at the bottom but tease you with the uppercrust
You get it then they move it so you never keeping up enough
If you turn on TV all you see’s a bunch of “what the fucks”
Dude is dating so and so blabbering bout such and such
And that ain’t Jersey Shore, homie that’s the news
And these the same people that supposed to be telling us the truth
Limbaugh is a racist, Glenn Beck is a racist
Gaza strip was getting bombed, Obama didn’t say shit
That’s why I ain’t vote for him, next one either
I’ma part of the problem, my problem is I’m peaceful
And I believe in the people.

[Lupe Fiasco – Verse 2]
Now you can say it ain’t our fault if we never heard it
But if we know better than we probably deserve it
Jihad is not a holy war, wheres that in the worship?
Murdering is not Islam!
And you are not observant
And you are not a muslim
Israel don’t take my side cause look how far you’ve pushed them
Walk with me into the ghetto, this where all the Kush went
Complain about the liquor store but what you drinking liquor for?
Complain about the gloom but when’d you pick a broom up?
Just listening to Pac ain’t gone make it stop
A rebel in your thoughts, ain’t gon make it halt
If you don’t become an actor you’ll never be a factor
Pills with million side effects
Take em when the pains felt
Wash them down with Diet soda!
Killin off your brain cells
Crooked banks around the World
Would gladly give a loan today
So if you ever miss a payment
They can take your home away!

[Lupe Fiasco – Verse 3]
I think that all the silence is worse than all the violence
Fear is such a weak emotion that’s why I despise it
We scared of almost everything, afraid to even tell the truth
So scared of what you think of me, I’m scared of even telling you
Sometimes I’m like the only person I feel safe to tell it to
I’m locked inside a cell in me, I know that there’s a jail in you
Consider this your bailing out, so take a breath, inhale a few
My screams is finally getting free, my thoughts is finally yelling through

[Skylar Grey]
It’s so loud Inside my head
With words that I should have said!
As I drown in my regrets
I can’t take back the words I never said