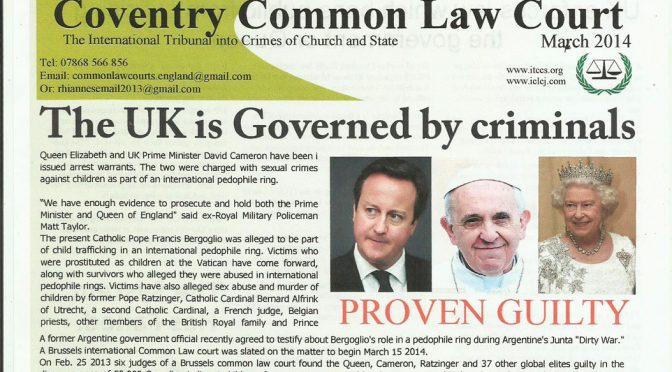 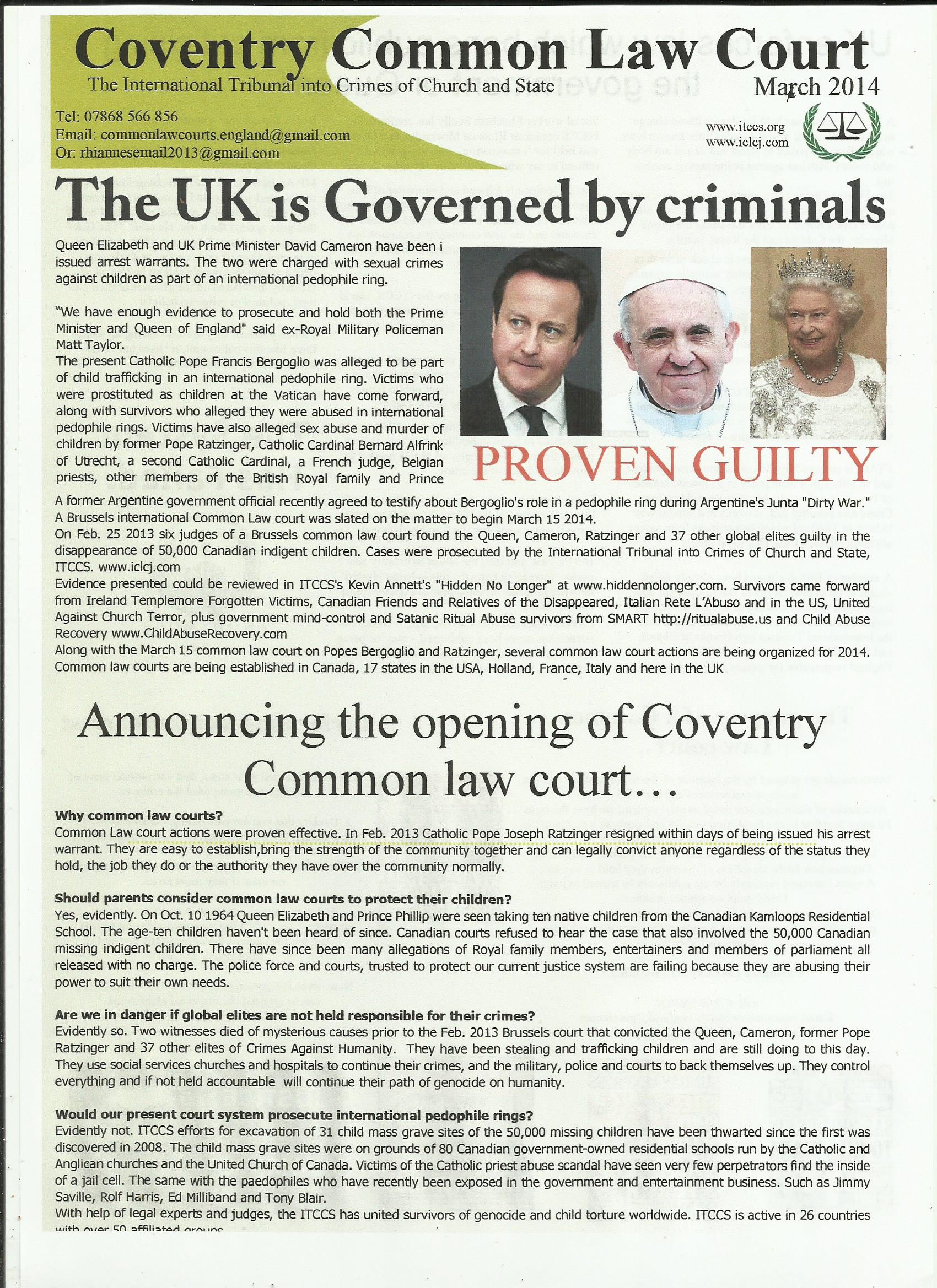 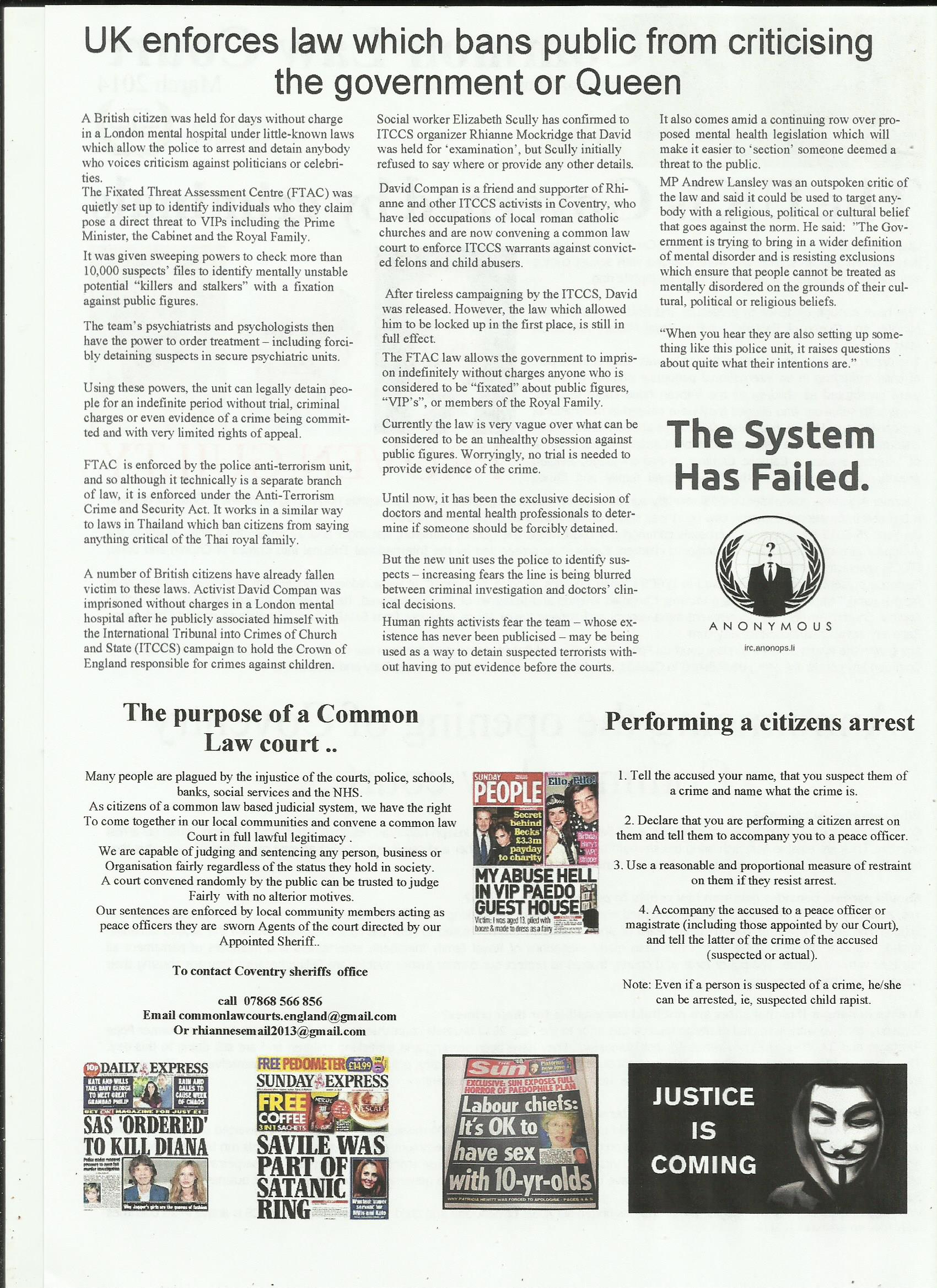 March 3, 2014
ARVE Error: need id and provider
Public Summons Issued to Pope Francis, Jesuits, Anglicans
http://youtu.be/027IQRqZF8o>
Formally charged with Crimes against Humanity, inciting Treason and abetting child trafficking, Pope Francis and the heads of the Jesuits and the Anglican Church have been issued a Public Summons. It compels them to appear before the International Common Law Court of Justice in Brussels on March 31, 2014, to answer these charges and face prosecution. This broadcast constitutes their legal service and notification. See www.iclcj.com and www.itccs.org .
The International Common Law Court of Justice
Criminal Trial Division, Brussels
PUBLIC SUMMONS
In the Matter of The People v. Jorge Bergoglio, Adolfo Nicolas Pachon, Justin Welby and others
Case Docket No. 31032014-001
ARVE Error: need id and provider
A SUMMONS to appear before this Court is issued on this day, March 3, 2014, to the following persons:
Jorge Bergoglio, alias Pope Francis 1, Pontiff of the Church of Rome
Adolfo Nicolas Pachon, alias Superior General of the Jesuit Order
Justin Welby, alias Archbishop of Canterbury of the Church of England
Let these person,s their agents and the world be advised that they, the named parties as flesh and blood men, are hereby publicly charged by the Citizen Prosecutor’s Office of the Court with the following offences:
1. Organizing, aiding and abetting child rape, torture and trafficking within their bodies Corporate, and inciting and commanding their agents and followers to do the same;
2. Violating the Laws of Nations and compelling their agents and followers to commit Treason within their respective Nations;
3. Criminal complicity in the death, rape, torture and genocide of untold numbers of children, and
4. Criminally conspiring to commit and conceal these offences, and counselling others to do the same.
These accused persons, as flesh and blood men, are hereby summoned to appear as primary Defendants in a law suit addressing their responsibility for these crimes to be adjudicated by the Court, commencing at its opening Examination Hearing on Monday, March 31, 2014, in the City of Brussels.
These Defendants are advised that they or their legal representatives must appear at this Hearing, or give just cause in writing within ten (10) days of this date as to why they are unable or unwilling to attend.
The Defendants are further advised that their failure to respond to this Summons or to challenge these charges made against them will be interpreted by the Court as a tacit admission of guilt by them, and will constitute a plea of nolo contendere, or non-contested declaration, and will be entered into the Court record as such.
This PUBLIC SUMMONS is issued by the Office of the Presiding Magistrates of the Criminal Trial Division of the Court on the Third Day of March in the year 2014, in the City of Brussels.
The Defendants are hereby publicly served.
_________________________________
Head Magistrate (signed in the original)
___________________________________
Secretary of the Court (signed in the original)
The Official Seal of the Court in the original
The International Common Law Court of Justice
Case Docket No. 31032014-001 – Filed in the Court Registry in Brussels, Belgium – 03/03/2014
contact: [email protected] , www.itccs.org , www.iclcj.com
ARVE Error: need id and provider


Criminal Trial Division, Brussels
March 1, 2014
Announcement of Case Docket No. 31032014-001:
ARVE Error: need id and provider
In the Matter of The People v. Jorge Bergoglio, Adolfo Nicolas Pachon, Justin Welby and others, and their Bodies Corporate
A Pre-Trial Hearing will commence on Monday, March 31, 2014 at 9:00 am GMT in Brussels
Issued by the Office of the Presiding Magistrates
E. Cantillon, Secretary
LET IT BE KNOWN that, based on an application brought before it by the Office of the Citizen Prosecutor on February 10, 2014, the Court will in thirty days commence litigation proceedings against Jorge Bergoglio (“Pope Francis 1″), Adolfo Nicolas Pachon (“Superior General of the Jesuit Order”), Justin Welby (Archbishop of Canterbury”) and others involved in Crimes against Humanity.
These defendants will be charged with organizing and abetting child rape, torture and trafficking, and criminally conspiring to commit and conceal these offences.
The Court will convene its pre-trial Examination Hearing on Monday, March 31, 2014 at 9:00 GMT in the city of Brussels.
The Court is therefore issuing today a Public Summons to the named Defendants to be present at this Hearing, either in person or through their legal representatives.
Failure by any of the Defendants to appear may be interpreted by the Court as constituting a plea of nolo contendere, or non-contested, and will be entered into the Court record as such.
A copy of the Summons will be issued immediately to the named Defendants by Sheriffs appointed by the Court.
Anyone with evidence related to this matter is invited to submit it to the Office of the Citizen Prosecutor of the Court in the form of a legally sworn deposition and affidavit. For details, please contact the Office at [email protected] .
ALSO:
The ITCCS and its affiliates are calling for a Public Day of Silence to End Church Violence against Children, on the day before the opening of the Trial: Sunday, March 30, 2014. You are asked to refrain from all normal activity that day and join in prayer, fasting and reflection.
The Tribunal asks all people of conscience to remember and act not only for the children who are presently suffering and dying at the hands of church-protected child rapists and traffickers, but for the countless children who have died at the hands of these churches – children like:
Albert Hance, age 9, starved to death at the Anglican St. George’s school in Lytton, British Columbia;
Richard Thomas, age 15, beaten to death by Catholic priest Terrance MacNamara at the Kuper Island school, British Columbia;
Shirley Tatooche, age 10, raped to death by Catholic priests at the Fort Albany school in Ontario …and at least 50,000 more children in Canada alone. (www.hiddennolonger.com)
Remember the Dead – Fight for the Living – Jail the Child Killers and all those who protect them!
Updates to follow.
Issued by The Public Information Office of the International Common Law Court of Justice, Criminal Trial Division and by ITCCS Central
March 1, 2014
[email protected]
ARVE Error: need id and provider