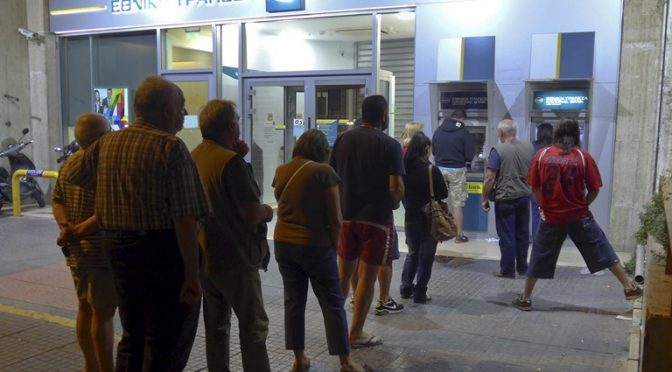 Update 6 July: Bloomberg just predicted that within 48 hours unrest will engulf Greece after its resounding “NO” vote against the Troika bailout program. Will the unrest be coming from the outside? Or, will they use embedded agents and NGOs like previous color revolutions? 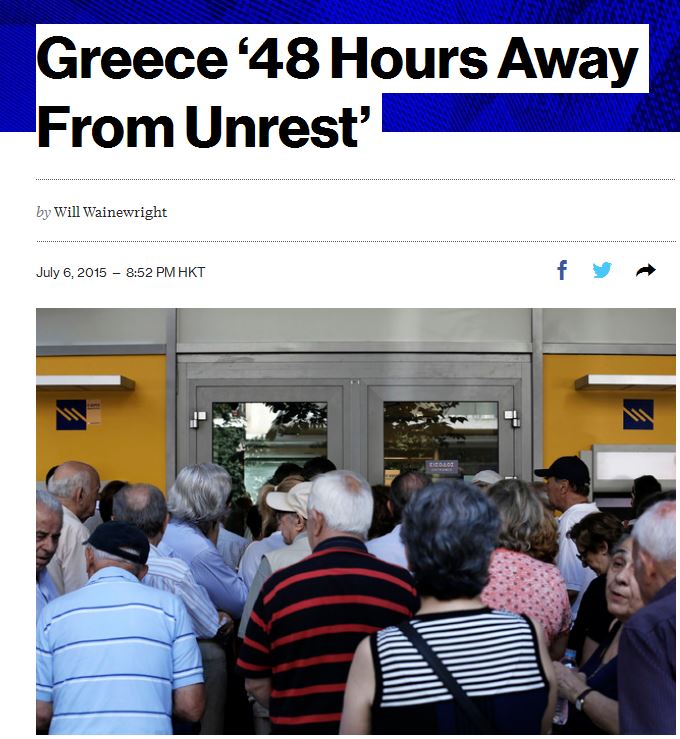 I take note of the outcome of the Greek referendum. This result is very regrettable for the future of Greece. For recovery of the Greek economy, difficult measures and reforms are inevitable. We will now wait for the initiatives of the Greek authorities. The Eurogroup will discuss the state of play on Tuesday 7 July.

German Chancellor Angela Merkel will meet French President Francois Hollande in Paris on Monday evening.
The ECB Governing Council is also due to talk, with a decision pending on what to do about Greek banks given the increased risk of default. Euro-area finance ministers are slated to meet at 1 p.m. on Tuesday in Brussels.
On the Greek side, Prime Minister Alexis Tsipras will need to find a replacement for Finance Minister Yanis Varoufakis, who resigned the morning after the referendum. He’ll also have to decide what to do about the banks, which were shut all last week.
continue reading »
This one is somewhat extreme but still probable giving the propensity of the Banking Cabal for taking aggressive measures whenever their position is threatened like in the case in Greece right now.

The Mood On The Ground In Greece: “Some Have Raised The Prospect Of Civil War”

Earlier today, John O’Connell, CEO of Davis Rea, spoke to Canada’s BNN from what may be Greece’s top tourist attraction, the island of Santorini, to give a sense of the “mood on the ground.” Not surprisingly, his feedback was that, at least as far as tourists are concerned, nobody is worried. After all, it is not their funds that are capital constrained plus should the Drachma return as the local currency, the purchasing power of foreigners will skyrocket.
What he did point out, however, that was quite notable is the diametrically opposing views between old and young Greeks when it comes to Grexit.
According to O’Connell, “the old people want to vote for Europe cause they have a lot to lose, they have their pensions, but the younger population – they are already poor, they are already unemployed – and they don’t have much to lose. Their attitude is it’s going to be tough, it’s already tough, and so why not just move on go back to the Drachma, and they’re ok with that.
Their attitude is in 5 to 10 years I’ll be better off. They believe there’s a lot of misinformation. They believe they’re being pressured by European countries particularly Germany that are holding them to very difficult terms.”
He continues: “whatever the polls may way, the young population is going to vote to leave the Euro and deal with the problems long-term.”
Finally, his take on capital controls and tourism: “You are going to see a big, big drop off in tourism because people are not going to want to come here. People are going to worry that if people do come here with a lot of Euro, are they going to be allowed to leave with those Euros.
It’s going to have a dramatic impact on the Greek economy at some point, a lot of the people that live here are underestimating how bad it could get in the short term.”
The punchline:
There have been some people that worry that the military may actually get involved. It wouldn’t surprise me – there are some people in Greece that have raised the whole prospect of potential civil war.
Who would benefit the most from a Greek civil war? Why the biggest exporter of weapons in the world, of course: the United States.
So dear Greeks: please avoid Kiev-style, CIA-inspired “Maidan type” provocations. The US military industrial complex is wealthy enough without your help.
Full video after the jump.
http://www.bnn.ca/Video/player.aspx?vid=646246
ZeroHedge
One of the significant sources of funds for the fascist Nazionist Jesuit Khazarian Mafia is the healthcare industry which registered a whopping $3.09 trillion in 2014, and is projected to soar to $3.57 trillion in 2017, in the US alone.
We can help take down the Dark Cabal by avoiding drugs, defeat any viral attack and scaremongering easily by knowing how to build our own comprehensive antiviral system. Find more about it here.