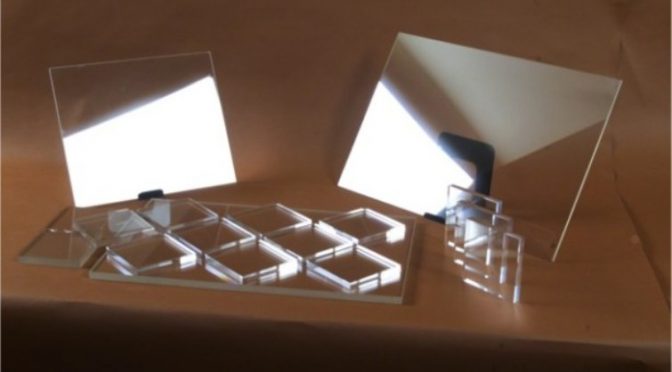 We’ve been told that all of these stuffs are just pigments of our wildest imagination. And as customary to the character of the system, a particular brand was assigned to it – Science Fiction.

­Although glass itself is a naturally occurring substance and has color variations as a result of impurities, man-made glass was probably first created accidentally as a result of the high temperatures used in making pottery. To make glass, silica and other materials are melted and fused together. Silica (sand) melts at 3,000 degrees Fahrenheit (1,650 degrees Celsius) requiring the use of a glasshouse pot or kiln [source: Valldeperez]. The formulations, or recipes, for stained glass can vary from artist to artist but always include silica and substances like boric acid, lime, caustic soda and potash to strengthen, stabilize and help the stained glass ingredients melt uniformly at a lower temperature than silica alone. more »

Every element has a different melting point. Solids melt into liquid through the application of the right temperature. A little beyond that stage, i.e. before it “disappears” like gas, a transformation usually occurs, one of which is transparency when the substance solidifies thereafter. This is the case with silica [sand] as outlined in glassmaking above. And what is possible with a given substance could also be in  another. We just have to employ a different temperature.

Heat is therefore a major factor for transformation, and that is what the sun is doing with Life.

But before we will be overshooting with our discussion, let’s now go back to StarTrek.

Those of you, um, enthusiastic enough to remember Star Trek IV may recall the scene embedded above.

If not, let me set up the clip: The crew of the Enterprise has gone into the past to retrieve some whales, OK? And take them “back to the future,” to coin a phrase. But Scotty has a problem: He needs stuff to build a giant whale tank on the ship, but he has no goods to trade with, because, you know, in the future they only work to better themselves and nobody but a Ferengi would stoop to carrying money around. So Scotty barters his knowledge of 24th-century materials technology with a 20th-century engineer, who agrees to make him what he needs in exchange.

The 24th-century material in question is “transparent aluminum,” and today I’m here to tell you: That future has arrived. Sort of. Pretty much.

The scene, as written, seems to imply that Scotty is talking about some fancy way of making metallic aluminum into a transparent form. Which ain’t happening. What has happened, however, (and in fact what was happening in research circles at least as far back as 1981) is the development of a transparent aluminum-based ceramic called aluminum oxynitride, aka “AlON,” that sounds a heckuva lot like the stuff Scotty is peddling. In fact, Star Trek IV came out in 1986, and it’s entirely likely that one of the film’s six (!) credited writers got wind of transparent aluminum from then-ongoing publicity about AlON, and decided to use it in the script.

Transparent aluminum starts out as a pile of white aluminum oxynitride powder. That powder gets packed into a rubber mold in the rough shape of the desired part, and subjected to a procedure called isostatic pressing, in which the mold is compressed in a tank of hydraulic fluid to 15,000 psi, which mashes the AlON into a grainy “green body.” The grainy structure is then fused together by heating at 2000 °C for several days. The surface of the resulting part is cloudy, and has to be mechanically polished to make it optically clear.

All that work pays off. AlON can do amazing things. Here, for instance, a 1.6″ thick AlON plate successfully resists a huge, powerful .50 AP bullet that smashes easily through more than twice that thickness of conventional laminated glass armor, with plenty of energy left over to extremely kill a plastic mannequin head.

It’s expensive, of course, and so generally reserved for high-performance applications, especially in military fields. AlON is manufactured by Massachusetts-based Surmet Corporation for use in armored windows, lenses for battlefield optics, and “seeker domes,” which are the clear round windows covering the sensor heads on the business ends of many missiles. If you want to read further, Tom Scheve has prepared a good bibliography over at HowStuffWorks.

What this tells us is that Science Fiction is not really so. It is the stuff of what is achievable right now.

More on this later.