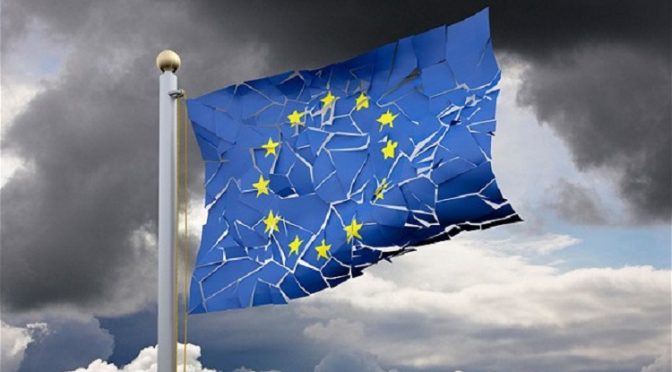 by benjamin
June 27, 2016
The real reason for the ongoing trouble in the European Union, including the recent vote by the British people to leave the bloc, is that the EU is bankrupt. We know in retrospect that the bankruptcy of the Soviet Union was the real reason the Warsaw pact fell apart, with Poland acting as the first domino. For the same reason, we can predict England was the first domino in the collapse of the European Union.

The emerging consensus view is, as Pentagon analysts put it, “Brexit may lead to Frexit (French exit), the collapse of banks, populism, nationalism and anti-globalism.” This is also likely lead to an end to Khazarian mafia sponsored Muslim immigration.
The situation in France has already become so chaotic that French police say they are becoming too exhausted to deal with the daily, violent demonstrations taking place throughout the country. French President Francois Hollande, who has only 11% public support, is trying to ban demonstrations but it is hard to see who will enforce his “ban.” In other words, France is headed for revolution.
“This is the worst period I recall, there is nothing like it,” is how former Federal Reserve Board Chairman Alan Greenspan described the general situation and the market chaos that followed the Brexit vote.
http://www.zerohedge.com/news/2016-06-24/greenspan-worst-period-i-recall-theres-nothing-it

This may be the worst period Greenspan and his Rockefeller, Bush sponsors can recall but the Rothschilds are saying they made $2.5 trillion in one day on Friday by shorting all the stock markets and going long gold. This is their biggest bonanza since their insider trading on Waterloo. As the Rothschilds say, “the best time to make money is when blood is running on the streets.”
Indeed blood may well start running. Even top CIA experts are publicly saying a revolution is imminent in Europe and the United States.
http://thespiritscience.net/2016/06/26/ex-cia-spy-a-global-open-source-revolution-is-about-to-begin/
However, if properly handled, this situation will be a good thing for the US, Europe and the rest of the world. If improperly handled, it will lead to chaos, warfare and hardship within Europe, the US and Japan and thus, to a lesser extent, in the rest of the world.
The EU that has gone bankrupt had become even more dictatorial than the Soviet Union ever was, according to Russian President Vladimir Putin. In Putin’s own words: “The percentage of mandatory decisions made by the European Parliament is larger than that of mandatory decisions made by the High Council of the USSR concerning its member-republics.”
http://www.informationliberation.com/?id=55071
Sources in the gnostic illuminati and the White Dragon Society say that if things are properly handled what is eventually going to happen is the European nations will form a larger, looser, freer union that will include Russia. In this scenario Britain will be a neutral country linked to Europe by free trade, somewhat like Switzerland, they say.
The bankruptcy of the EU was triggered by the bankruptcy of Deutschebank, the largest bank in Europe, according to members of the Rothschild banking dynasty. Deutschebank is now under Chinese control, they say. If the Chinese had not stepped in to save Deutschebank, its collapse would have triggered a domino effect that would have taken down the entire European and then Western banking systems, multiple sources agree.
There was also a secret dimension to this bankruptcy that can be traced to military activity in the Pacific Ocean. A massive joint Chinese and American fleet was engaged in “maneuvers” last week off the shores of the Philippines.
http://www.mirror.co.uk/news/world-news/chinese-warships-join-forces-massive-8255107
You can also confirm on the Pentagon official homepage that massive joint exercises involving naval forces from 27 nations, including China and the US, start near Hawaii on June 30th.
http://www.defense.gov/News-Article-View/Article/799099/rim-of-the-pacific-exercise-2016-begins-june-30
The real aim of last week’s maneuvers, according to WDS sources, was to cut off gold smuggling by submarines out of the Khazarian mafia submarine base in Nabire, Indonesia.
The result of this maneuver is that the Freeport McMoRan gold mine located near the submarine base has suddenly been put up for sale for the price of $20 billion, according to CIA sources based in Indonesia. Members of the board of directors of Freeport McMorRan have included such characters as Henry Kissinger and Godfrey Stillman Rockefeller.
https://en.wikipedia.org/wiki/Freeport-McMoRan
The CIA sources say the Freeport McMoRan mine is being offered to the Chinese via a front company out of Australia. This is how Indonesia hopes to pay off $20-30 billion that was advanced to it by the Chinese last year, they say. However, they add, “The US side knows that they are selling a virtually empty hole.”
Meanwhile the previous owners of Freeport “will move to another mountain which is within 5-7 miles from the Grasberg mine, which is Freeport’s current mining area. Someone is getting the shaft in this deal… No pun intended.” The source said he thought the massive joint naval exercise was “just a cover.”

The Chinese need to remember that “Kissinger has been a 50% owner of Freeport since the reign of Suharto, when he was given the shares in exchange for other services and profitable joint ventures between Suharto and the Kissinger Boys…..ie; the Cabal [Khazarian mafia].”
The source adds one reason the mine was given to Kissinger, the Rockefellers etc. was as payment for allowing Indonesian President Suharto to invade and annex East Timor in 1975.
Since it is a good bet the mine has been cleaned out of most its gold, what this really means is that the Khazarian mafia no longer has enough gold to finance EU and US trade deficits with Asia and the rest of the world. The Asians do not accept empty promises printed on paper and, as the Asian bar girls say “No money (gold), no honey.”
Rothschild family sources say there is now serious infighting at the top levels of the Khazarian mafia over what to do next. They say family meetings are going on and they have asked the WDS and its allies to wait until July. They have been given a deadline of July 10th after which the Khazarian mafia will lose any chance of participating in setting up a new, fairer and more earth friendly financial system. They will also be subject to a total and absolute boycott that will inevitably drive them into bankruptcy and obscurity.
Pentagon intelligence is confirming that the faction of the Khazarian mafia once headed by George Bush Sr. has split with former Bush top mobsters Donald Rumsfeld and Dick Cheney seeking protection from Donald Trump while Brent Scowcroft, Hank Paulson and Richard Armitage are seeking protection from Hillary Clinton.
However, neither of these candidates is likely to be in a position to protect these criminals for very long. Sources close to Trump say he might go along with Cheney and Rumsfeld for now but only as a temporary measure.
Sources in the FBI, meanwhile are saying that, if necessary, they will take down Barack Obama and Attorney General Loretta Lynch in order to get to Hillary Clinton.
The Pentagon sources also say the “Jewish Mafia” (=Khazarian Mafia) “are in panic mode on both sides of Atlantic after their Orlando false flag failed as Senate blocks four gun control measures on June 20th, the Senate denied FBI access to web browsing/e-mails without a warrant on June 22nd, and the Supreme Court killed Obama’s immigration plan.”
Clearly a lot of countries are waking up to the fact there has been a change at the top of the world power structure. One indication, for example, is that Israel, Egypt and Syria have applied to join the Shanghai Cooperation Organization. That means Israel is applying to join a military alliance that its one time “arch-enemy” Iran is also joining. It is also an organization that is theoretically opposed to their long term supposed allies and protectors the US and NATO.
http://www.fort-russ.com/2016/06/syria-egypt-israel-apply-to-join-sco.html
Poland and other countries in Eastern Europe have also shown they understand things are different now because they have agreed to join China’s new “Belt and Road Initiative,” meaning the building of major transportation links heading east through Russia to China.
http://news.xinhuanet.com/english/2016-06/21/c_135454841.htm
Building links east makes sense for Poland because they can see the EU is losing control. CIA sources in Europe say the European Central Bank has been issuing large of amounts of forged Euros, meaning they have no real collateral to back them.
Pentagon sources agree, saying the “Euro may be replaced by national currencies as yuan is gold-backed and new US dollars have been printed waiting for public announcement of a global currency reset and the release of hundreds of trillions in stolen funds.”
This global currency reset, though, is not going to include such things as Zimbabwe dollars fraudulently sold to suckers by members of the Bush/Clinton mafia. However, allowance may be made to members of the US military who invested in Iraqi Dinar, but not if doing so benefits the Bush/Clinton mafia, WDS sources say.
In closing, the Japanese underground has also gotten the message and serious preparations are being made for regime change here. Even Bank of Japan Governor Haruhiko Kuroda has admitted that “Abenomics” has failed and that Japan needs to take a new tack. Rothchild family sources asked what was going to happen to their Japan handler Michael Greenberg and were told “he is going to go to jail.” Richard Armitage can go face his ghosts in the US, while Kenneth Courtis will probably be left alone.
http://benjaminfulford.net/2016/06/27/the-eu-is-bankrupt-and-that-is-why-its-governing-structure-will-fundamentally-change/
Aside from the fiat monetary scam and bloodsoaked petrodollar, another significant source of funds for the Nazionist Khazarian Mafia is the “healthcare” industry which registered a whopping $3.09 trillion in 2014, and is projected to soar to $3.57 trillion in 2017, in the US alone. We believe that this is just a conservative figure.
We can avoid using drugs, defeat any viral attack and scaremongering, like the Zika virus, easily by knowing how to build our own comprehensive antiviral system. Find more about how we can kill three birds with one stone, right here.