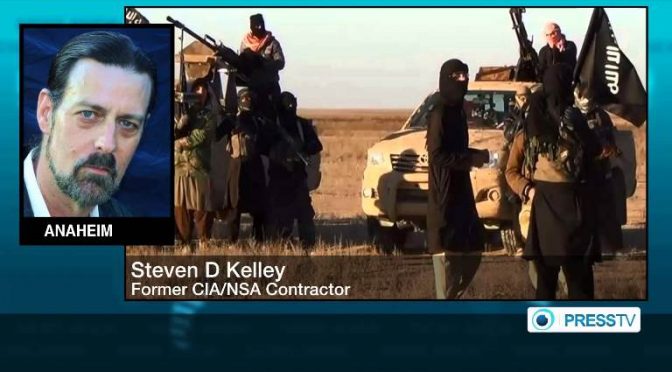 Former CIA contractor Steven Kelley has said on record that ISIS/ISIL are a fabricated terrorist group made and funded by the CIA in the United States.

https://www.youtube.com/watch?feature=player_embedded&v=FlJsFNLt5Ac
According to the video description:
“This is a completely fabricated enemy,” he said in a phone interview with Press TV from Anaheim, California on Thursday.
“The funding is completely from the United States and its allies and for people to think that this enemy is something that needs to be attacked in Syria or Iraq is a farce because obviously this is something that we create it, we control and only now it has become inconvenient for us to attack this group as a legitimate enemy,” Kelley added.
He made the remarks as US President Barack Obama is under pressure to seek congressional approval before expanding Washington’s military air campaign against ISIL targets from Iraq into neighboring Syria.
The Pentagon has already launched at least 100 airstrikes on ISIL positions in northern Iraq since Obama authorized the use of force against the terrorist group earlier this month.
The White House insists it does not need explicit congressional authorization for those operations because they are intended to protect American personnel and interests inside the Arab country.
White House press secretary Josh Earnest said Monday that Obama “will not hesitate to use his authority” to keep Americans safe, but added that the president was “committed to coordinating and consulting with Congress” on a decision to hit ISIL targets in Syria.
“If you want to get to the root of the problem and remove this organization, the first thing they need to do is to remove the funding and take care of entities responsible for the creation of this group,” Kelley said.
“I believe that this ISIS group would probably go away, would be easily defeated by the armies of [Syrian President] Bashar Assad,” he said.
source: http://yournewswire.com/cia-contractor-we-fabricated-isis/#sthash.VePnuewS.dpuf
We can help bring down the Cabal and defeat the Depopulation Agenda