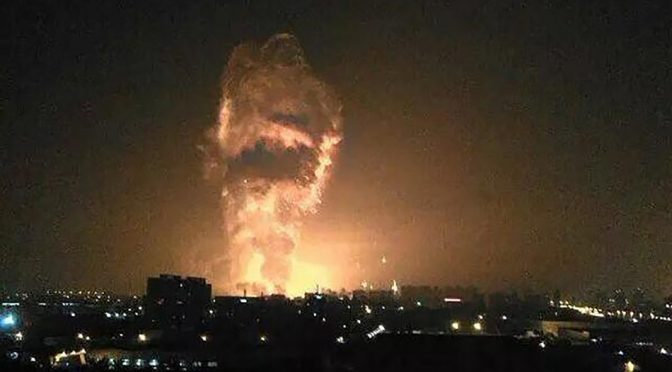 Update 16 Aug 2015: The death toll from massive explosions in China’s port of Tianjin has risen to 112 and 95 people, most of them fire fighters, are missing, state media said on Sunday, suggesting the toll will rise significantly.  source
Update 15 Aug 2015: According to the latest official figures, 721 people have been hospitalised, including 25 who are in a critical condition, 33 people who are in intensive care, and 40 people have been discharged. source
Is China under attack after yuan devaluation?
It looks like this is some form of retaliation from the mega corporation that owns several affected companies with large exposures in the country.
Port city Tianjin is a symbol of China’s meteoric rise to economic power. It is indeed a perfect target being the intended beneficiary of the recent PBOC’s decision to subject the yuan to a floating exchange rate in its desire to become part of IMF’s SDR portfolio, a basket of sovereign currencies that is dethroning the fiat US dollar.

Early reports suggested that hundreds of people were injured in the blasts, which were felt several kilometres away. The blasts registered as magnitude 2.3 and 2.9 earthquakes on the moment magnitude scale, with the resulting fireballs reaching hundreds of meters high.[6][7] The China Earthquake Networks Center reported the first and second blasts were equivalent to 3 and 21 tons of TNT, respectively.[8]

Firefighting has been suspended because of a lack of clarity on the content and quantity of the hazardous material in the warehouse.[9]

According to Chinese state media, at least 300–400 people were taken to local hospitals,[10] many with extensive injuries, mostly from burns and explosive blast injuries. Over a thousand firefighters were on scene, 12 of whom have died.[9] Contact has been lost with 36 firefighters.[3][11][12][13][14]

Initial reports have stated that at least 44 people were killed and 32 severely injured. The 12 firefighters killed are counted among the 44 dead. [15]

Buildings of seven logistics companies were destroyed in the blasts, along with more than a thousand new cars in a nearby parking lot.[16]

The Tianhe-1A supercomputer was shut down after the National Supercomputing Center of Tianjin was damaged by the blasts. The computer was not damaged and still remains operational.[17]

According to state news, high-ranking officials of Ruihai Logistics are being held in custody.[10]

Everett Rosenfeld
A massive explosion hit a “dangerous goods” warehouse in Tianjin, China, on Wednesday, killing at least 44 people and leaving emergency services staff trapped in the rubble.
The explosion in the Binhai New Area on the city’s coast happened at about 11.30pm local time, with videos posted on social media showed a towering inferno above one of China’s largest urban areas.
Reuters cited a report by official news agency Xinhua that 44 people were confirmed dead – including 12 firefighters – and as many as 400 injured. The Beijing News, an official outlet, reported that authorities had lost contact with 36 firefighters on the scene.
As many as eight fire engines were destroyed by the blast. Nearby, firefighters wept as they worked to extinguish the flames, Beijing News reported.

Chinese President Xi Jinping ordered a fast and comprehensive rescue operation, and promised a thorough investigation and severe punishment for any wrongdoing.
Shares of companies in the Binhai economic development zone dropped sharply, against gains on the main indexes, and Tianjin Port Development halted trading in its shares in Hong Kong without giving a reason.
CCTV and the People’s Daily reported that crews of firefighters and rescue teams arrived at the warehouse at about 10.50pm to tackle a fire, and were then trapped by the subsequent blasts.
Citing the China Earthquake Networks Centre, Dow Jones reported that seismologists had tracked two explosions at about 11.34pm. The second blast was equal to about 21 tons of TNT exploding, while the first was the equivalent of about 3 tons of TNT, according to numerous reports.
CCTV said that the blast could be felt miles away from the scene in the port city.
Dow Jones reported that the warehouse is used by Ruihai International Logistics, a company that handles hazardous materials, citing a blog run by China’s Ministry of Public Security Fire Department.

Some local reports indicated that residents had been warned to close their windows in case of hazardous gases.
Canadian teacher Monica Andrews told the BBC that she awoke in panic after what she thought was an earthquake.
“I … looked out the window and the sky was red … I just watched a second explosion go off and (it was) just pure chaos, everyone leaving their apartment buildings thinking it’s an earthquake, cars trying to leave the complex and …it was crazy the amount of light that this explosion and fire lit up,” she said.

People react near a street after a blast at Binhai new district, in Tianjin municipality, China, August 12, 2015. A huge explosion hit an industrial area in the northeastern Chinese city of Tianjin late on Wednesday evening, triggering a blast wave felt several kilometres away and injuring at least 50 people, domestic media reported.

Videos of the explosion showed flames lighting up the night sky and state-run news agency Xinhua quoted residents in nearby districts as saying the blast had shattered windows. In the videos, residents and workers could be seen fleeing the scene.
CCTV reported that about 100 fire trucks had been sent to the scene. Xinhua said fireballs from an initial blast had ignited further explosions in premises nearby.
Tianjin is one of the largest cities in China, two hours’ drive away from Beijing, with an estimated population of more than 15 million people.
Industrial accidents are not uncommon in China following three decades of breakneck economic growth. A blast at an auto parts factoryin eastern China killed 75 people a year ago when a room filled with metal dust exploded.
—Reuters and the Associated Press contributed to this report.
CNBC
The big question now is: how would China respond?