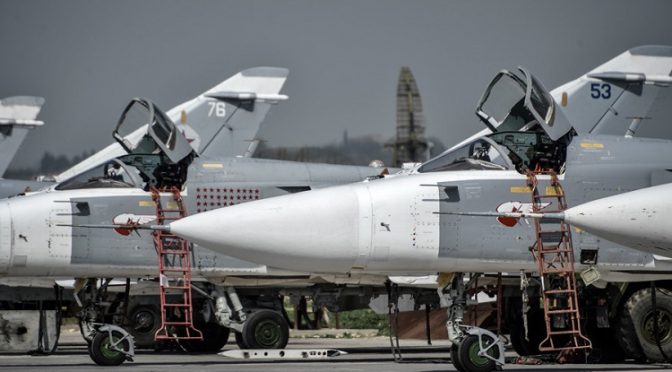 In a show of magnanimity and tactical wisdom, Russian President Vladimir Putin orders Russian Forces in Syria to start returning home after delivering 9,000 air sorties which saw the devastation of Daesh positions, arms depots, miles long oil tanker convoys, and the freeing of at least 400 towns and cities.


This victory comes at a cost of one Sukhoi Su-24 fighter jet and its pilot, and an undisclosed number of officers, including a general.
The preservation of the Syrian state should raise the geopolitical standards in the Middle East and elsewhere to a new level away from just arming groups as a method of toppling one regime after another.
Such flamethrower treatment has destroyed more countries than it saved. In deep contrast, the Russian brokered “fragile” ceasefire in Syria is still holding up.


Russian President Vladimir Putin has ordered the start of the withdrawal of Russian forces from Syria, saying that its objectives have been largely achieved. Russia will however keep a military presence at the port of Tartous and at the Khmeymim airbase.

00:02 GMT
Former US ambassador to Morocco, Marc Ginsberg, believes that Washington should “welcome Mr. Putin’s decision to reduce the number of Russian troops inside Syria.”
“I think it’s important that it shows that perhaps there is a role now for more moderate forces to be able to help take control over the territories that had been more or less left in no-man’s land and so that the humanitarian support that is necessary to be brought in is able to be by organizations in order to feed Syrians desperate for humanitarian relief,” Ginsberg told RT.
“It’s clear that both the Russian government and the United States government had a common objective here, and that is to try to bring some humanitarian relief to the terrible crisis that has been going on inside Syria.”

23:17 GMT
The United Nations Security Council has positively received the news of the Russian withdrawal from Syria.
“We have also taken very good note of the decision by the Russians to start withdrawing part of these forces,” the Security Council’s rotating president, Angola’s Ambassador Ismael Abraao Gaspar Martins, told reporters. “When we see forces withdrawing, it means war is being taking a different step. So that’s good.”

“I do not think that Russia will stop battling Islamic State and Al-Nusra Front,” Gerard Bapt, a member of the National Assembly of France, told RT. Bapt noted such a move would contribute to the stabilization of the situation in Syria, as all non-terrorist parties involved in the conflict will have no other choice but to engage in peace efforts.

Apparetly Russia has achieved its military objectives and Moscow believes that there is less danger from Islamic State militants, Eric Coquerel from France’s Left Party told RT.
“This [Russian troops withdrawal] is a necessary and positive [development]… It was probably carried out and to facilitate [Geneva] negotiations because in our view the Syrian issue should be resolved in the UN,” he added.

Russian President Vladimir Putin held a telephone conversation with his US counterpart Barack Obama about Syria, Putin’s press office said. Both presidents spoke in favor of fast political regulation of the Syrian conflict and spoke about the Geneva talks.
Putin informed Obama that after the Russian forces fulfilled major goals fighting international terrorism, Russia decided to withdraw troops from Syria, the statement says.

The Russian operation “changed the situation on the ground. ISIS is being pushed back,” journalist Neil Clark told RT.

9,000 sorties, 400 localities freed: What Russia has achieved during its 5-month Syria operation

As Russia’s Vladimir Putin announced the start of the withdrawal of Russian forces from Syria, Defense Minister Sergey Shoigu has reported the anti-terror operation’s achievements to the Commander-in-Chief.
“Backed by our aviation, Syrian forces have freed 400 populated areas and over 10,000 square kilometers [3,860 square miles] of territories,” Shoigu said during a Kremlin meeting with Russia’s President Vladimir Putin on Monday.

Terrorists have been forced out from Latakia and Aleppo, and Palmyra has been “blocked,” the military official reported to Putin, saying that military actions to free the UNESCO heritage site from militants continue. Hama and Homs Provinces in central Syria have been largely mopped up, and Kuweires airbase that had been besieged by terrorists for over three years was retaken.

Saying that Russia’s Air Force in Syria has conducted more than 9,000 sorties starting from September 30, 2015, the Defense Minister added that for the first time massive strikes at a range over 1,500 kilometers [930 miles] with both air and ship-launched missiles have been conducted.

With Russia’s support from the air, the Syrian army managed to retake control of oil and gas fields near Palmyra. Three large fields have already started functioning in normal mode, the minister added. In all, 209 oil production facilities and almost 3,000 oil delivery vehicles have been destroyed by Russia’s airstrikes.

“As a result of airstrikes, terrorists’ resources’ provision has been largely cut,” Shoigu told Putin, saying that petroleum trade routes with Turkey, as well as main routes of weapons provisions to terrorists have been blocked.
The Russian campaign also reduced the threat posed to Russia by Islamic militants, as over 2,000 fighters from Russia have been “eliminated” in Syria, including 17 field commanders.
To strengthen the progress achieved, Russian continues the aerial monitoring of the ceasefire’s observance.
“A fairly large number of unmanned aerial vehicles – over 70 – are being used for this purpose, as are all means of gathering intelligence, including electronic intelligence and our satellite constellation,” Shoigu stated.
https://www.rt.com/news/335596-russia-syria-operation-results