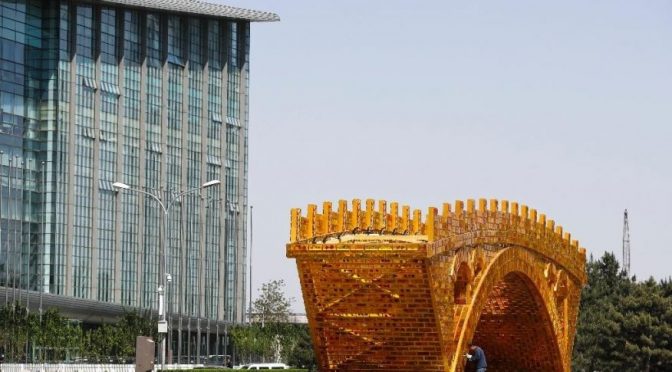 Decades ago, the West criticized China for being an isolationist country. Now that it is opening its doors for healthy and peaceful collaboration with them, the West is resorting to criticism and even tries to move into a protectionist stance. Suddenly, globalism became a dirty word, and capitalist “China is just promoting its One Belt, One Road Initiative to find an open market for its industrial over capacity. “
Suddenly, China is the currency manipulator when it’s the West that’s been printing debt-based currencies like there’s no tomorrow.
Certainly, China has its own vested agenda. Who has none to begin with? But it’s not China’s fault to have achieved such a feat in so short a time, without firing a single shot. Even more so, because it is the Western companies that have benefited largely from its cheap labor.
Even if those Western criticisms are real, this is far better than using those surplus steel production of the massive assembly of weapons of war – that’s the only “other thing” one will do when peaceful collaboration is not an option.
In short, the West is now exposing its own excessive exceptionalist character as if it is the only good thing that exist on this planet, and others need to bow down to its superiority.

China will gather its friends and allies together for its biggest diplomatic event of the year in May, a summit on its New Silk Road plan, with most Asian leaders due to attend but only one from a G7 nation, the Italian prime minister.

What the West needs to understand is that the East is not trying to compete with it. The oriental culture is more about being adaptive to prevailing realities rather than being confrontational. That’s why it never sought to be at the center of the world’s attention for a very long time. Even the concept of reviving the ancient Silk Road was never oriental but a Western idea long proposed by the Schiller Institute.
According to Reuters, the West is not attending the China OBOR Summit because of the dubious personalities who are also attending, as led by Vladimir Putin himself and a double down from “street killer” Rodrigo Duterte.

Diplomatic sources said the presence of Putin and other leaders from countries with dubious human rights records, like the Philippines and Central Asian states, had contributed to a reluctance among Western leaders to attend.

Of course, we already understand from what standpoint these people are coming from.
Here’s the Duterte government taking the offensive against Western media propaganda at the World Economic Forum – Cambodia.

The false sense of self-importance and sheer arrogance can be gleaned upon from the above same Reuters article when it considers Chile and Argentina as having little connection to the Eurasian OBOR project.

Leaders from countries that would appear to have little, if any, connection so far to the plan are coming to the summit, including Chile and Argentina.

The bottomline really is: the current generation of Western leaders are incapable of understanding the true spirit behind China’s revival of the ancient Silk Road. To them it’s a pretty complex idea which may need more time to contemplate upon.

Going to war with anybody is much simpler, i.e. black propaganda, false flag operations, and invasion. Their own Schiller Institute needs to forget about their classical ideas.

In December 2014, my American and European friends published an updated Special Report The New Silk Road Becomes the World Land-Bridge. These projects are venues for cooperation among nations in their shared interests. My movement sees extraordinary coherence between the Westphalian principle of seeking the benefit of the other, and what President Xi Jinping of China calls a win-win policy.
It means real changes in thinking. For example, if the Schiller Institutes 2012 program for the development of the Mediterranean Basin Great Infrastructure Projects, extending the New Silk Road to all of southern Europe, were to be implemented, then Greece is not a basket case, but can become the bridge between Europe and BRICS, in the tradition of the ancient historical ties between great cultures such as Greece and China.

Only the force of military might is capable of maintaining order. That’s the type of mindset which pervades Western elite, and from which the Europeans and Americans will suffer.

Sputnik 10:39 11.05.2017
In their new book, German financial experts Marc Friedrich and Matthias Weik propose a radical new economic model, which they say will help society to cope with the changes wrought by increasing digitalization.
Friedrich told Sputnik Deutschland that action taken to arrest the 2008 financial crisis, such as quantitative easing, has only papered over the cracks in the global financial system.
“Things are going in the wrong direction. Unfortunately, nothing has changed since the 2008 financial crisis. On the contrary, problems were only covered over with a lot of cheap money. Don’t forget that the European Central Bank (ECB) has pumped 1.75 trillion euros into the system to buy bonds from bankrupt companies and to support insolvent countries, in order to keep the whole money carousel running.  [However,] that has only bought time,” Friedrich told Sputnik.
Their idea builds on proposals for a universal basic income that have been discussed with increasing regularity in recent years. In a referendum last summer, the Swiss rejected a referendum proposal to give every citizen a basic income of 2500 Swiss francs ($2,478).

28 Apr, 2017 14:59
The US economy showed its weakest performance since 2014 in the first three months of the year after consumer spending sharply slowed and businesses invested less in inventories.
The country’s GDP increased at a mere 0.7 percent annual rate, down from 2.1 percent and 3.5 percent in the second half of 2016. Analysts surveyed by Reuters expected growth of 1.2 percent last quarter.
The decline in growth is due to the smallest increase in consumer spending since the end of 2009, which broadly mirrors fewer car sales. Consumer spending grew only 0.3 percent, reflecting a steep drop from the 3.5 percent gain at the end of 2016.

Puerto Rico, whose people and resources have been exploited by American businesses for over a century, needs to receive services on the same level as those provided to US citizens, said Kathy Gannett, a Puerto-Rican pro-independence activist.
The Commonwealth of Puerto Rico is in debt to the tune of $123 billion dollars – that’s about $74 billion in bond debt and $49 billion in unfunded pension obligations.
The US Supreme Court is now expected to appoint a judge to the case, as the island, which is a US territory, is not permitted to declare bankruptcy. However, it’s unclear at this point how much help the Caribbean Island will receive.
Donald Trump repeatedly said that Puerto Rico should not be offered a bailout during the election campaign. Though the island’s people are considered US citizens, they don’t enjoy full rights unless they move to the US mainland.