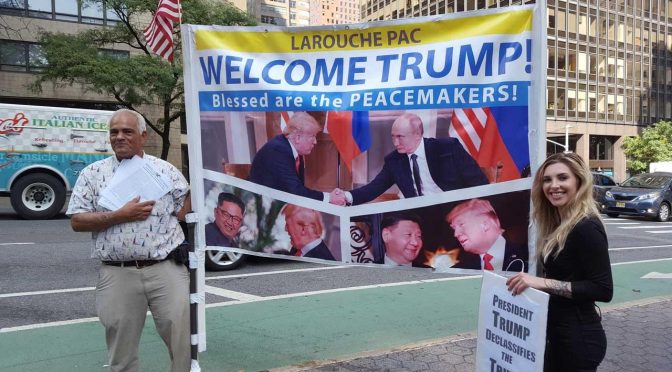 We are now two weeks before the U.S. mid-term elections, which, whatever the outcome, will be a break-point in world affairs. At the same time, the financial system centered on Wall Street and the City of London is about to blow out, while the British geopolitical crowd is madly pushing international confrontation to the point of all-out war, and equally madly demanding that industrial society be eradicated from the planet, in the name of its CO2 green insanity.
Depending on the outcome of the Nov. 6 elections, President Donald Trump is either freed up to make good on his campaign pledges of economic betterment and decent relations with Russia, China, and other great powers, or we face some variety of doom. To be sure, a New Paradigm of international development relations is underway, but it is not yet consolidated. Our situation in the U.S. elections is spelled out in the new LaRouchePAC statement in circulation titled, “The 2018 Midterms Are Humanity’s Big Chance; Don’t Blow It on a Bunch of Crazies George Soros Pays For.” It states, “November 6, 2018: The Last Big Chance for Humanity’s Future.”

November 6, 2018: The Last Big Chance for All of Humanity?
In the election of 2018, what are the actual stakes? If you only pay attention to the stupid media, or partisan policy lines, you probably have no idea and could be so frustrated you might stay home. That would be a huge mistake. We have a chance in this election to destroy the British Empire, the monster which, along with its American servants, has been a destructive force against most of humanity since the end of World War II. Franklin Roosevelt tried to end this murderous menace to the world when the great war ended, telling Winston Churchill that Americans would no longer die on behalf of British imperial aims. Instead, FDR proposed to use the great industrial power of the United States to develop all of humanity. When Roosevelt died, Harry Truman made his deal with the devil instead; the “special relationship” was created.
In 1989, the Berlin Wall fell, ending the Cold War and providing a big chance, once again, for a renaissance of new collaborative scientific discovery, economic development, worldwide technological progress, and high culture — based on sovereign relationships between nation states. That was championed by Lyndon LaRouche and others. Instead, George H.W. Bush, Margaret Thatcher, and Francois Mitterrand conspired to create the “New World Order” of globalization, free trade, and relentless austerity against the great mass of humanity. The United States was deliberately deindustrialized and speculative money was either invested in more funny money or in the cheapest sources of labor available anywhere on earth. The post-industrial hell of drugs, pornography, gambling, and Hollywood entertainment took over our former industrial centers, while the socially atomized world of cellphones and video games replaced human communication. Small, but perpetual wars were undertaken to police and cull whole populations.
Donald Trump proposed to end this. He campaigned in support of Glass–Steagall banking separation, ensuring that you and I won’t pay for Wall Street’s next financial collapse. He seeks mutually beneficial trade relationships between developing nations, rather than the globalist system which imprisons everyone. He has referred to the American System of political economy, invented by Alexander Hamilton, fully employed by Abraham Lincoln, and wielded by Franklin Roosevelt to create the greatest economic power the world has ever known, the arsenal of democracy developed in America during World War II. He seeks sane relationships with both Russia and China, ending Obama’s insane efforts at regime change in Russia and hostile isolation of China.
But Trump has been blocked at every turn by the British instigated coup against him because the British and their American servants view him as a mortal threat to their Empire.
Whether that coup continues and destroys this nation is up to you.
If you vote for the Democrats on November 6 and don’t support candidates who support Trump, you will be voting for the insanity and anarchy which you just saw in the Kavanaugh hearings — politicians paid for by George Soros and a host of New York and California billionaires who will impeach the president and have no program other than continuous chaos and violence in support of their views.
If you vote for the Democrats on November 6 and don’t vote for candidates who back Trump, we will also lose what may be our last chance to remove the disease of Empire from the earth — our chance to do justice for the millions of unnecessary deaths caused by this disease and to prevent a new war which could kill us all.
In their frantic coup against Trump, the British and their American co-conspirators have acted recklessly, exposing whole chunks of the Anglo-American police state apparatus, the propaganda machine aimed at keeping the population distracted, demoralized, and docile. This was supposed to remain hidden. In their hysterical and McCarthyite attacks on Trump, the entire legacy media apparatus and Hollywood entertainment empire have been exposed as nothing but one mass brainwashing machine.
We now know, as the result of Congressional investigations, that the entire Russiagate operation was a fraud, paid for by the Clinton campaign but created and run as a continuing psychological and information warfare attack by the British government against the American President. That is why the British government has thrown a fit about President Trump’s order to declassify the documents underlying the Justice Department’s illegal investigation against the President. Removing Trump is one of their goals. Subjugating Russia and China is another. This effort can only result in a new World War.
https://larouchepac.com/20181019/2018-midterms-are-humanity-s-big-chance-don-t-blow-it-bunch-crazies-george-soros-pays

If you step away from the lies and hysterics in the U.S. media right now about the President, the picture becomes very comprehensible, that the electorate which voted for Trump in 2016, still wants no more of the policies they rejected in that election. In 2016, they voted against the Bush/Obama “London” wars in Iraq and Afghanistan, that cost lives, limbs, and hope. They voted against the free trade economic hardship. They voted against the Hillary/Wall Street duplicity and arrogance in perpetrating policies of destruction. For example, look at the condition of younger veterans, and their families. Since 2003, some 2.77 million American military servicemen and women have been deployed to Iraq and Afghanistan, of which 977,000 have served two tours of duty, and many served even more. An estimated 20 veterans die each day from suicide, according to national studies. All the while, targetted Asian countries have been devastated.


Even as international media continue lying that “President Trump is isolated,” thousands of voters are turning out for the Trump state rallies. In Texas, over 100,000 people applied to attend Trump’s event in Houston this evening, for which a bigger venue had to be booked, but even so, coordinators had to resort to contingencies for tailgate parties in the parking lot, with giant video screens. People started lining up the night before; by 9:00 a.m. this morning, some 8,000 people were waiting. Backers have come from as far away as Pennsylvania and Ohio, in addition to people from the nearby states of Louisiana, Oklahoma, and New Mexico.
The independent candidacy of Kesha Rogers for Congress (9th C.D.) in Houston, is in the forefront of the action, distributing thousands of leaflets to the crowd, to supply the policy content of backing Trump in the election. During drive time this morning, a huge banner hung over one of the superhighways in Houston, saying: “Kesha Rogers for Congress Welcomes President Trump– Fire Impeachment Al Green!”
The task in Houston, across the United States and around the world, is to get people to think on a higher level, that is, what is needed 100+ years from now. This involves recognizing that the old, British Empire-type system is in breakdown; and it involves grasping and acting on principles for the future. This was spelled out by LaRouchePAC Science Team member Megan Beets, in a presentation, “The World Needs More People,” Oct. 20, in New York City, at a Manhattan Project event.

“It really is our job now, with this potential of this emerging new paradigm, with this Empire so exposed, in the [C02 green] fraud of what they’ve been pushing, and so rejected by the majority of humanity at this point, we have not just a potential, but the real responsibility to form a new paradigm of human progress. And that means we have to create the potential for a lot of geniuses. And that means that we have to create the conditions now, for those geniuses to come into existence.
We have to shut down this anti-people, anti-population policy; we have to reject it, and we have to get the United States to join in the intention of what China’s leading with the Belt and Road Initiative–and more than that, the higher vision that the LaRouches have had for decades now, of a real, global Renaissance, the real uniting of mankind around a common mission for our common progress.” – Megan Beets

The caravan of migrants is said to be the handiwork of foundations funded by George Soros to prop up the votes for the Democrats come November 6th.

Why I’m Investing $500 Million in Migrants
The Wall Street Journal, September 20, 2016
The world has been unsettled by a surge in forced migration. Tens of millions of people are on the move, fleeing their home countries in search of a better life abroad. Some are escaping civil war or an oppressive regime; others are forced out by extreme poverty, lured by the possibility of economic advancement for themselves and their families.
Our collective failure to develop and implement effective policies to handle the increased flow has contributed greatly to human misery and political instability—both in countries people are fleeing and in the countries that host them, willingly or not. Migrants are often forced into lives of idle despair, while host countries fail to reap the proven benefit that greater integration could bring. – GeorgeSoros.com

Yeah, just like an innocent bystander looking out for the welfare of the world.

17 thoughts on “The World Heads to a Breaking Point, 2 Weeks Before U.S. Midterm Elections”