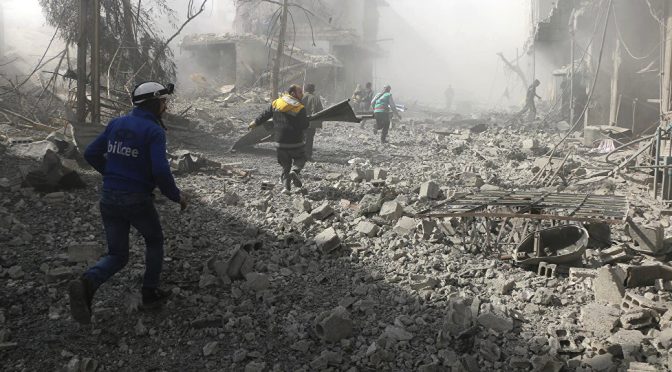 Canada has accepted 117 White helmets along with their family members, evacuated earlier in July from war-torn Syria with the help of Israel, CBC News reported Sunday.
In late July, over 400 White Helmets’ activists and their families were evacuated from Syria at the request of Canada, European countries, and the United States amid a full-scale offensive by Syrian government troops against militants and terrorists in country’s southwestern regions.
According to CBC News, the now-former White Helmets will be settled in four provinces, including British Columbia, Saskatchewan, Ontario and Nova Scotia. The international community reportedly expected to remove up to 1,200 evacuees, including first responders and their families. In the end, only 422 Syrian White Helmets and their families managed to get out last July.
CBC News said, citing evacuees, that hundreds of White Helmets remain in Syria.
Canada’s Foreign Ministry said earlier that Ottawa was in the process of resettling a group of White Helmets members who had to leave Syria, stressing that security screening was completed before members of the Syrian civil defense group can fly to Canada as refugees.
According to Syrian President Bashar Assad, the group is affiliated with al-Qaeda terrorist organization. The Russian permanent mission to the European Union said earlier that the evacuation of the White Helmets from Syria proves that the states organizing the operation were seeking to cover up the provocative actions of the self-proclaimed humanitarian group.

Damascus and Moscow have accused the White Helmets of helping to stage a chemical attack in Syria’s Eastern Ghouta town in April. That attack prompted the United States, the United Kingdom and France to launch more than 100 missiles on multiple targets in Syria one week later.
In late September, Russian Deputy Foreign Minister Sergey Vershinin said that militants as well as White Helmets continued their preparations for plotting chemical attacks to discredit the Syrian government’s troops.
Lebanon’s Al-Mayadeen television said Thursday that Militants and the White Helmets group have transported unidentified poisonous materials from the city of Jisr al-Shughur to the settlement of Khirbat al Amud, both located in the rebel-held province of Idlib.
Syrian Foreign Minister Walid Muallem called Saturday the White Helmets the main tool for staging chemical attacks, adding that this was a terrorist organization created with the financial aid of the UK intelligence.
Muallem reiterated that Syria had destroyed all its chemical weapons arsenals and had not used them.