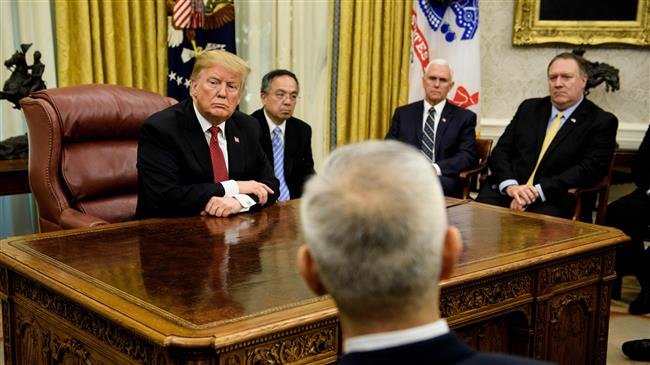 In America, the president is not actually in control of the affairs and policies of the government, but a mere shadow of competing interests, none of which represents directly that of We, the People.

Even with its deteriorating economic conditions, the collective inaction of its citizens is very remarkable considering how they were always ready to “come to the aid of oppressed nations around the globe.”

Ironically, it is that American apathy that drives a highly coordinated countermeasures from abroad to finally end and decapitate the power and influence of the Deep State over the militarily weaker nations under its thumb.

The United States has dispensed with diplomatic niceties and now simply tells its vassals and protectorates to get with its program or else.

“In a thinly veiled rebuke of the initiative, which aims to unite European and Asian markets, a spokesman for the White House’s group of national security advisers said on Saturday that Italy’s participation in the BRI would add ‘legitimacy’ to Beijing’s infrastructure project. Italy is a major global economy and great investment destination. No need for Italian government to lend legitimacy to China’s infrastructure vanity project,” spokesman Garrett Marquis said on Twitter.

This is the latest attempt by the gangster regime in Washington, lead by Don Trump, to go around the world telling nations left and right to pay for protection, buy its fraudulent wares with US script, and not to trade with or purchase its competitor’s goods or services. Otherwise they will face the wrath of US displeasure. This is a mafia protection racket, plain and simple. It is the way of Chicago gangland thugs of the 1930s. These are the classic actions of a criminal organization. Murder and mayhem will be visited upon any who resist its threats, intimidation and extortion. If you don’t play by the racketeer’s rules, your house or business is likely to be firebombed, your wife raped and your children abducted for ransom.

This scenario has been played out time and again, most recently in Italy. Previously, in July 2018, US Secretary of Stare Pompeo issued a veiled threat to Panama warning that, “when China comes calling, it’s not always to the good of your citizens.” In September 2018 the US announced that it was recalling its ambassadors from El Salvador and the Domincan Republic and its charge d’affaires from Panama after the three counties broke ties with China’s renegade province Taiwan and endorsed the People’s Republic of China.

More recently it has cajoled its Anglophone settler state allies not to buy Chinese telecommunications equipment produced by Huawei, a rival to US IT companies. It has also warned Turkey not to buy Russian S-400 anti-aircraft weapons systems.

During US Secretary of State Pompeo’s visit to central and eastern Europe in September 2018 he applied pressure to the Czech Republic, Hungary and Poland to curtail their diplomatic and economic relations with China. Meanwhile, the US has been threatening countries in Europe and elsewhere to adhere to their boycotts and sanctions against Russia, Iran and Venezuela or face the consequences of illegal secondary sanctions imposed on them by the rogue regime in Washington.

The US has long opposed China’s Belt and Road Initiative (BRI), spreading the false narrative that its investments to help nations build essential infrastructure and industries are a so-called “debt-trap.” The US, its think tanks and media have targeted African, Latin American and European nations with a barrage of propaganda in an attempt to sabotage China’s global trade policy.

When push comes to shove, the US is more than willing to disrupt the affairs of  its recalcitrant allies, destabilize any country that stands up to its bullying and destroy any that resists its domination and control.

While these are all actions of a global hegemon and bully, they are also those of a coward running sacred. The tide of history is turning against them. It’s time for the people and nations of the world to say enough is enough and tell the US to mind its own business and get lost.

Dennis Etler is an American political analyst with a decades-long interest in international affairs. He is a former professor of Anthropology at Cabrillo College in Aptos, California.

The declining influence of the US in the Middle East is nowhere clearer than in the recent summit between two erstwhile enemies in the region,

Iranian President Hassan Rouhani is in Baghdad on a trip aimed at solidifying strategic ties despite US efforts to keep the two neighbors apart and curb Iran’s influence in the region.

He met with his Iraqi counterpart Barham Salih shortly after arrival on Monday for important talks which the Iranian president described as “very good.”

“Strengthening ties between Tehran and Baghdad works to the benefit of both countries and we won’t let this positive path towards progress slow down to a halt,” Rouhani said at a joint news conference.

Salih described the trip as “very important” and said the two sides had agreed on new frameworks for cooperation which would be unveiled later in the day.

“We need to get past trivial details in mutual relations and think about the bigger and broader space for cooperation and ties because this would best serve the interests of both countries,” he added.

The Iranian president also thanked Iraq for hosting millions of Iranians who pour into the neighboring country every year to mark the occasion of Arba’een, which is the 40th day after the martyrdom anniversary of Imam Hussein (AS).

7 thoughts on “US Deep State: A Criminal Organization Running Scared”