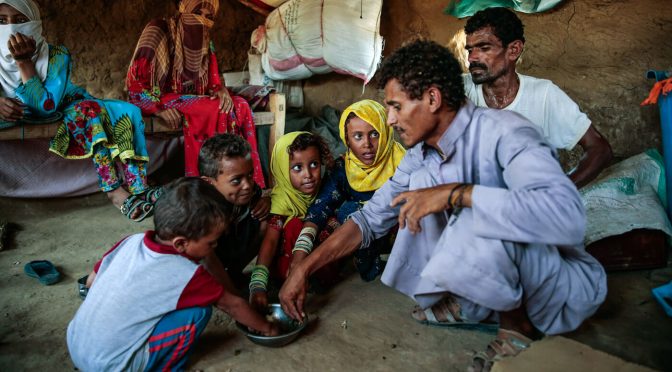 Yemeni authorities are accusing some international aid agencies of playing politics with food aid, correctly pointing out that financiers of the organizations are the very same countries participating in the war on Yemen.

TAIZ, YEMEN — A recent Saudi Coalition airstrike on the home of a prominent Yemeni businessman in Taiz destroyed not only a family home but also the hopes of the many Yemenis who rely on the generosity of philanthropic donors, as international aid agencies become increasingly beholden to the political interests of their largest benefactors.

One woman and four children are among seven family members killed by a Coalition airstrike on a home in Yemen’s Khadir district in the southwestern province of Taiz. Five other civilians were reportedly injured in the attack, regarding which the Coalition has thus far not commented. Two of the airstrikes targeted the family home of Abdulqawi al-Kindi, a businessman who worked extensively to alleviate the humanitarian crisis in the Khadir region. Al-Kindi, his wife and sons were all killed in the attack that completely destroyed their three-story family home.

“He [al-Kindi] helped many poor and displaced families here,” an eyewitness to the attack told MintPress, as tears flowed from his face while local rescuers attempted to retrieve bodies from the rubble. “Al-Kindi did not belong to any party or group — he was just a businessman.”

The attack has angered local residents who still remember Saudi Coalition bombings in recent years that have targeted a school bus, mourning halls, markets, hospitals and the neighborhood of Rugass among other civilian targets. Residents of Taiz have called for retaliatory attacks against the Coalition. A high-ranking official told MintPress that the attack in Taiz is yet another flagrant violation of international law and human values and would be met with a strong response and retaliation.

For their part, the Houthis denounced the Taiz attack and noted that the bodies of innocent Yemeni women and children do not lead international parties to stop lucrative arms sales to aggressor regimes, referring to U.S. arms sales to Saudi Arabia and the United Arab Emirates.   Mohammed Abdul-Salam, the spokesman of the Houthis, said in the wake of the attack that “killing, injuring citizens, and targeting civilian houses is considered a continuation of the aggressive bloody [tactics].”

The attack in Taiz was not the first to target prominent Yemeni businessmen and came after the World Food Program suspended food aid to areas of northern Yemen. The UN agency said the move came after it was unable to reach an agreement with Yemen’s National Authority for the Management and Coordination of Humanitarian Affairs and Disaster Recovery (NAMCHA) over the implementation of a biometric system to support aid delivery.

Last week, the World Food Program (WFP) announced it had partially suspended operations in northern Yemen, where 14 million people have been pushed to the brink of starvation, accusing Houthi forces of diverting the aid, a charge the Houthis adamantly deny. The WFP said:

The decision was taken as a last resort after lengthy negotiations stalled on an agreement to introduce controls to prevent the diversion of food away from some of the most vulnerable people in Yemen.”

NAMCHA has accused the WFP program of corruption and said the aid group is exploiting aid for political purposes. The agency has raised concerns that a biometric system that uses iris scanning, fingerprints and facial recognition could easily be exploited by the Saudi-led Coalition.

NAMCHA said in a statement on Tuesday:

The WFP is no longer carrying out a humanitarian operation [in Yemen], but its activities have rather become purely political. It is advancing the agendas of the United Arab Emirates (UAE), Saudi Arabia, and the United States.”

The Houthis claim that there is a precedent in which the Coalition used the WFP as cover to occupy some areas. The Coalition reportedly seized the strategic Red Sea Port of Mukha, situated 346 kilometers south of Sana’a, in December 2017, claiming the move was necessary to protect WFP shipping containers filled with humanitarian aid in the port city.

Abdul Mohsen Dawoos, the head of NAMCHA, said that World Food Program asked for detailed biometric data for more than 13 million people, including civilians and military and security personnel. The request included biometric data from important military personnel who are involved in Yemen’s domestic ballistic missile programs, raising fears from Sana’a authorities that the data would be transferred to Saudi Coalition forces.

These developments come as Yemen’s armed forces are stepping up retaliatory attacks using drones and winged cruise missiles against vital targets in Saudi Arabia, including airports in Asir, Najran, and Jizan, as well as power stations in Jizan. On Saturday, Yemeni forces launched a fresh attack on Saudi Coalition aircraft and military equipment in airports in Jizan and Abha, inflicting losses on the facilities and leading to the suspension of air traffic.

NAMCHA has called on the UN, the WFP, and all international aid organizations to shoulder their responsibilities towards the sufferings of the Yemeni people and to continue to provide assistance without being subject to extortion by donor nations. The agency pointed out that amongst the largest donors and financiers of the WFP are the very same countries participating in the war on Yemen, led by Saudi Arabia and the UAE and supported by the United States.

Plenty of blame, no food

To many Yemenis, the suspension of aid is no accident. The scant food aid provided by the United Nations, which millions of Yemenis rely on for their daily sustenance, often doesn’t reach people until it is already expired — by that time often crawling with worms and cockroaches.

Last week NAMCHA turned back a WFP shipment of enough flour to feed 100,000 families because it was so far past expiration. On Sunday, Mohammed Ali al-Houthi accused the WFP of trying to cover up the delivery of spoiled food and expired aid. The WFP has mainly blamed the Houthis, saying that the rejected shipment will deprive thousands of families of badly needed aid.

Regardless of who is to blame, the suspension of aid is sure to make the humanitarian situation in Yemen worse. It comes as one in every 30 children in Yemen dies during their first month of life as a result of malnutrition or increased exposure to infection, according to a recent report from the United Nations Children’s Fund (UNICEF).

When a mother dies, this greatly increases the risk of her children dying. Children who have lost their mothers often have little chance of survival.”

The maternal mortality, of course, is expected to worsen with the suspension of aid.

In its report, UNICEF also warns of the total collapse of basic services in Yemen because of the continuing devastating war that has raged on for five years, with only about half of the country’s health facilities still functioning and a severe shortage of medicines, equipment, and staff.

The report also points out that the interruption of salaries has led to lower working hours in vital facilities such as hospitals, schools, water and sanitation facilities, as well as in other vital public sectors. The salaries of more than 1.25 million government employees — including doctors, social workers, and other public sector employees — have been suspended for more than two and a half years. Now, like Yemen’s other citizens, public sector employees — who were often among the beneficiaries of humanitarian aid — do not know where they will get their next meal.