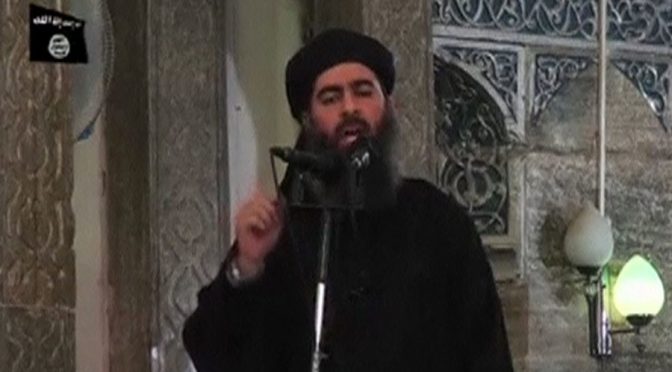 A few years ago, ISIS leader Abu Bakr al-Baghdadi has been reported as one of those who died via Russian airstrike against a meeting of ISIS commanders in Raqqa, Syria.

The Russian Defense Ministry said on Friday it is checking on information indicating that Islamic State leader Abu Bakr Al-Baghdadi was reportedly killed in a Russia-led airstrike in Syria.

Russian Su-34 aircraft and an Su-35 multirole fighter carried out airstrikes near the Islamic State (IS, formerly ISIS/ISIL) stronghold of Raqqa in northern Syria on May 28, the ministry said. The strikes targeted a meeting of high-ranking Islamic State chiefs where Al- Baghdadi was reportedly present.

“According to information that is being checked through various channels, IS leader Ibrahim Abu-Bakr al-Baghdadi, who was killed as a result of the strike, was also present at the meeting,” the ministry said in a statement.

But just like how Al Qaeda ring leader Osama bin Laden had to die again in 2011 to prop up Obama’s deteriorating popularity then, al-Bagdhadi had to die again also for the sake of Victorious Trump.

Trump needs to prop up his ratings at home to counter the effects of an ongoing coup attempt of the UK Crown through the Democratic Party leadership. In addition, the likes of Trump cannot stand being eclipsed by a Putin in the world stage.

That’s why he must do something, and suddenly took a U-turn by saying that the US troops must remain in Syria for the time being. Then this tweet,

Did Abu Bakr al-Baghdadi commit a suicide, or liquidated?

Already there are at least two conflicting reports on how exactly the ISIS leader al-Bhagdadi died.

Notorious Islamic State leader Abu Bakr al-Baghdadi was killed in a US military operation in northwest Syria, according to reports. He supposedly detonated a suicide vest during the raid.

It is said that during the US mission – involving choppers, warplanes and drones – American troops engaged in a firefight with the terrorist. At a certain point, al-Baghdadi detonated the vest, multiple outlets, including ABC and Defense One, said citing sources. Later on Saturday, Iraqi state TV announced it will air the footage of the reported raid.

The Pentagon has yet to confirm the rumors, but US President Donald Trump is expected to make a major announcement on Sunday morning. On Saturday night, Trump tweeted that “something very big has just happened!” – fueling speculation that al-Baghdadi had in fact been killed.

A high-ranking source in Iraqi intelligence confirmed that Baghdadi had been liquidated in Syria’s Idlib province, according to reports. Iraqi state TV said that it will air footage of the raid that killed Baghdadi.

Just like what happened in Osama bin Laden’s case where he was “thrown into the sea hours after his assassination in 2011”, the Iraqi intelligence has just confirmed the death of al-Baghdadi during a US raid, putting great emphasis on his “always wearing a suicide vest even in his sleep,” and therefore, blown himself off to smithereens.

This means that we should not ask for any physical confirmation anymore. We just have to take their words for it.

Or was he actually been liquidated? If so, was his dead body thrown into the sea also?

No. His “DNA was confirmed 15 minutes after his death,” according to the man of the hour, Trump.

However, the latest video released about raid poses more questions than answers. The entire compound was pulverized…

Even this guy doesn’t really know how to lie properly..

To top it all, here’s the comparison between the two clowns’ shining moment in the White House…

We could be wrong of course that this “al-Baghdadi death” is just a rerun, and Donald Trump should be appreciated for sending the MOSSAD agent to his grave.

But the Russians are very skeptical because…

What’s this “something very big has happened” really is the thing that finally ended the many deaths of al-Baghdadi and probably will give Trump a Nobel Peace prize much like Obama did.

Because just like we always say, the only real revolution is the one you are fighting right now.