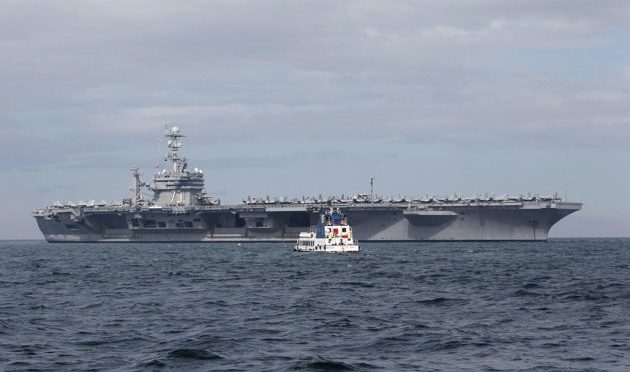 It’s becoming clearer now what the US warships are here in the Philippines for.

US Corp. Senator Lugar, the most senior among the Republicans in the Senate, arrived in the country couple of days ago. 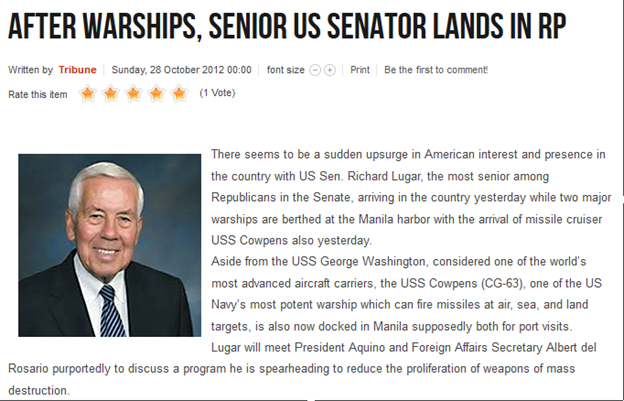 This guy, among others, was responsible for the ouster of President Marcos in 1986 thru a CIA/Jesuit instigated People Power uprising. The same method is now being used in the Arab Spring. They are doing this every time a dictator ceased serving their interests.

Since the current Philippine President BS Aquino is the son of the naiveté CIA Stooge Cory Aquino, who helped toppled Marcos, they are hoping that they could extract some more favorable concessions, especially in their worst of times.

The Philippines is surely the most important province of the Cabal as it is home to the greatest hoard of bullion in the entire history of mankind. Proof of how the Vatican thru Her Madness Queen Lizzie made Marcos signed another version of his Last Will and Testament can be downloaded here.

There are glaring errors in that document which indicate that Marcos had not the opportunity to review before signing it in December 20, 1988 at the Buckingham Palace:

We have yet to examine the document thoroughly but the above should satisfy a notion that it was not the late president nor any of his assistants prepared the most important document for this country and the world.

Reading the news above indicates that the warships have no prior schedule just like in a joint military exercise which both countries did only last April of this year where eight ships were said to being used in an attempted plundering of hidden treasures in Palawan.

The presence of multiple highly-advanced warships in the area is more than just an intimidation. Coupled that with a visit of a key Cabalist who told Marcos to “cut and clean” days before he was ousted, this is a last ditch effort to cling to power. It costs so much sending a fleet of highly advanced warships for just a “friendly” visit.

What this recent military and “diplomatic” visit means is that the Cabal is still trying to strengthen its bargaining chip in the greatest multifaceted war man has every fought. And to make the message perfectly clear as possible they are sending the most experienced manipulator into the country.

The parallel negotiation for their “peaceful surrender” has just turned ugly as they are being squeezed tighter and tighter thru a $43 Trillion Lawsuit that could serve as a pretext to massive arrests of high-ranking bankers and conniving government officials around the globe.

Whether the current spineless CEO Aquino would yield to the pressure or not is definitely a no brainer. His circle of advisers, the local Council of Trent, is mostly working for the Jesuits.

This country would be the last to be freed once the Cabal is fully neutralized. The reason for that is the reality that this country has been fully brainwashed for the last 400 years. 90% Catholicization made this country the poorest among its neighbors in SouthEast Asia, while sitting on a great pile of gold and other treasures.

At this point, we are basically days away from the highly anticipated Big Event which would consist of the following:

In the next few days, we will see if we are living with patriots or just crawling around with invertebrates.

One thought on “Could US Warships and A Cabalist-Senator Disrupt the Big Event?”