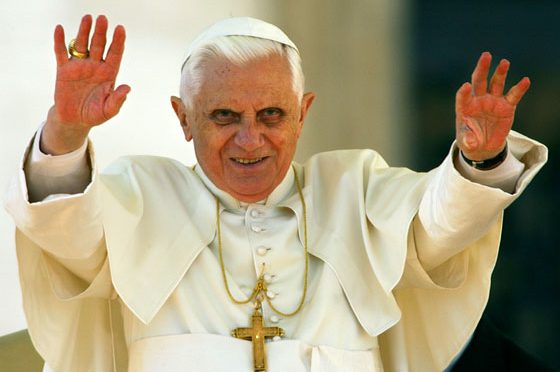 Last year, the Vatican Church had been exposed not only as the main Headquarter for Phaedophiliacs but the godfather of all high-profiled money laundering activities. This is the reason why no sensible banks want to deal with it anymore, hence the preference for cash instead of plastics in all economic activities within the Unholy City.

The pope’s shocking resignation is said to be due to his being tired which is uncommon to infallible gods like him. But for those who have been following the ongoing covert yet global financial war, there should be more to it than meets the eye.

Ben Fulford’s latest update only talks about Bush and Blair as having outed the pope for his being the mastermind of both 911 and 311 attacks. What we have been waiting is the International Tribunal into Crimes of Church and State’s take on the matter, because this organization had been filing lawsuits against the Crown and the Church since last year.

Diplomatic Note was issued to Vatican just prior to his resignation

The historically unprecedented resignation of Joseph Ratzinger as Pope this week was compelled by an upcoming action by a European government to issue an arrest warrant against Ratzinger and a public lien against Vatican property and assets by Easter.

The ITCCS Central Office in Brussels is compelled by Pope Benedict’s sudden abdication to disclose the following details:

1. On Friday, February 1, 2013, on the basis of evidence supplied by our affiliated Common Law Court of Justice (itccs.org), our Office concluded an agreement with representatives of a European nation and its courts to secure an arrest warrant against Joseph Ratzinger, aka Pope Benedict, for crimes against humanity and ordering a criminal conspiracy.

2. This arrest warrant was to be delivered to the office of the “Holy See” in Rome on Friday, February 15, 2013. It allowed the nation in question to detain Ratzinger as a suspect in a crime if he entered its sovereign territory.

3. A diplomatic note was issued by the said nation’s government to the Vatican’s Secretary of State, Cardinal Tarcisio Bertone, on Monday, February 4, 2013, informing Bertone of the impending arrest warrant and inviting his office to comply. No reply to this note was received from Cardinal Bertone or his office; but six days later, Pope Benedict resigned.

4. The agreement between our Tribunal and the said nation included a second provision to issue a commercial lien through that nation’s courts against the property and wealth of the Roman Catholic church commencing on Easter Sunday, March 31, 2013. This lien was to be accompanied by a public and global “Easter Reclamation Campaign” whereby Catholic church property was to be occupied and claimed by citizens as public assets forfeited under international law and the Rome Statute of the International Criminal Court.

5. It is the decision of our Tribunal and the said nation’s government to proceed with the arrest of Joseph Ratzinger upon his vacating the office of the Roman Pontiff on a charge of crimes against humanity and criminal conspiracy.

6. It is our further decision to proceed as well with the indictment and arrest of Joseph Ratzinger’s successor as Pope on the same charges; and to enforce the commercial lien and “Easter Reclamation Campaign” against the Roman Catholic church, as planned.

In closing, our Tribunal acknowledges that Pope Benedict’s complicity in criminal activities of the Vatican Bank (IOR) was compelling his eventual dismissal by the highest officials of the Vatican. But according to our sources, Secretary of State Tarcisio Bertone forced Joseph Ratzinger’s resignation immediately, and in direct response to the diplomatic note concerning the arrest warrant that was issued to him by the said nation’s government on February 4, 2013.

We call upon all citizens and governments to assist our efforts to legally and directly disestablish the Vatican, Inc. and arrest its chief officers and clergy who are complicit in crimes against humanity and the ongoing criminal conspiracy to aid and protect child torture and trafficking.

Further bulletins on the events of the Easter Reclamation Campaign will be issued by our Office this week.

Statements #5 and #6 should be fully supported by everyone to send a clear message that we don’t condone all forms of sadistic behavior within and without the premises of any institution, especially in that hallowed grounds of the Usurpers of the Divine.

The closing statement also indicates that the men behind the most effective, most elaborate mind control device ever created, are panicking, they want Ratzinger out of the fold even at the eleventh hour as part of “damage control” measures.

However things would actually turn out depend largely on our level of participation.

12 thoughts on “Pope Resigned to Avoid Arrest and Seizure”