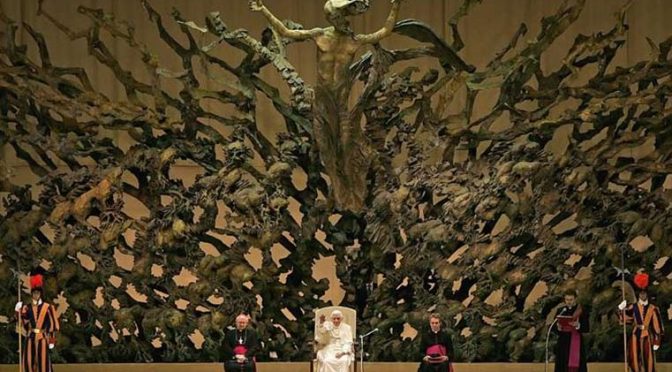 A STAND DOWN ORDER IS ISSUED TO OFFICERS OF THE PAPACY AND THE CROWN:
“Your oaths of allegiance are nullified and you are freed and obligated to serve God, the common law and the people”
TODAY, ON THE FIRST ANNIVERSARY OF THE CRIMINAL CONVICTION OF POPE BENEDICT AND QUEEN ELIZABETH AND THEIR CORPORATIONS, a public notice of treason and order to comply was issued to all of the agents and officers of these felons by the Common Law Court responsible for their conviction.
The legal order was issued by The Presiding Magistrates of the Criminal Trial Division of the International Common Law Court of Justice in Brussels.
One year after an historic common law court verdict convicted thirty officials of church and state for Crimes against Humanity, the Court issued a “stand down” nullification order to all of the agents of those bodies, including the Vatican, the Crown of England and the government of Canada.
This order completes the legal disestablishment of the guilty institutions by releasing the police, judiciary, clergy, soldiers and all employees of these convicted bodies from their oaths of allegiance to the former head of state of the Commonwealth, Elizabeth Windsor, and to the Pope and the papacy in Rome.
The order negates the authority and jurisdiction of all of these officials. It notifies them that their continued allegiance to the convicted heads of state and church will constitute collusion with wanted criminals, and thereby an act of Treason against the people and the law, and may result in their arrest and imprisonment.
The Order will be delivered in person and through the media to these officials by the community at large and by sheriffs authorized by the Court’s Presiding Magistrates.
Simultaneously, the Court has authorized the establishment of new Common Law police officers to enforce the Court’s verdict and replace the disestablished authorities.
“Quite simply, this is a revolution” explained Kevin Annett, Field Secretary for the International Tribunal that sponsored the Court, at a press conference today on sovereign territory formerly part of Canada and now under Common Law jurisdiction.
“To nullify the authority of the judges, the police and the politicians who are the agents of criminal institutions is the inevitable and lawful consequence of the Court’s indictment of those bodies for crimes against humanity. This is being done legally and in the open. Under the law, there no longer exists what we knew as the Vatican, the Crown of England or the governments of Great Britain and Canada. Those populations are now under the sole jurisdiction of the common law and the covenants that they, the people, establish among themselves and with their Creator.
“It is now up to every one of us to enforce this Order, and we are all equally empowered to do so. The old authorities and their laws can and must be actively ignored. And the standing citizen arrest warrants against Joseph Ratzinger, Elizabeth Windsor and others will be enforced.”
This most recent Order from the International Common Law Court of Justice precedes the upcoming commencement of its second case, involving global child trafficking, on March 31, 2014. Pope Francis, Jorge Bergoglio, will be summoned as the chief defendant in this case, which will convene at an open hearing in Brussels.
To pursue this and other convictions, Common Law courts have been organized by citizens and ITCCS affiliates in Canada, the United States, England, Ireland, Holland, Spain and Italy.
For more information and updates see www.itccs.org and www.iclcj.com .
Issued by ITCCS Central and the International Common Law Court of Justice, Brussels
24-25/02/2014
Papal and Crown Officers Ordered to Stand Down by Court
[youtube=http://youtu.be/dlsEm2hvXRk]
Please support us by downloading our Second Edition of Towards Healthcare Emancipation, a fully illustrated eBook about how you can implement a low cost but extensive and decisively effective healthcare system in the comfort of your own home.
The proceeds from this book will be used to fund our next project, Towards Energy Emancipation.
The aim is to make the subject of free energy more understandable for the layman so that anybody could replicate and install his own power plant and be completely living off-grid.
If you haven’t done so, please like our FB page to encourage others to learn more about our work.
Thank you very much for your valuable support.
Rome:
In a repeat of the massive “Protest the Pope” march that brought 20,000 people into the streets of London in September, 2010, activists from around the world will converge on Rome on Thursday, April 3 to stop a planned meeting between convicted felon Elizabeth Windsor and Pope Francis, Jorge Bergoglio.
“These heads of church and state are guilty of child trafficking and murder. We won’t let them harm any more children, anywhere, and I don’t care how much protection they’ve got” said Fernando R., an Italian organizer of the action.
The Rome action will include plans for a convergence of spiritual elders outside the Vatican on Easter Sunday, April 20, to conduct a third and final Exorcism and Replacement Ceremony. Further details of these actions will be posted soon at www.itccs.org .