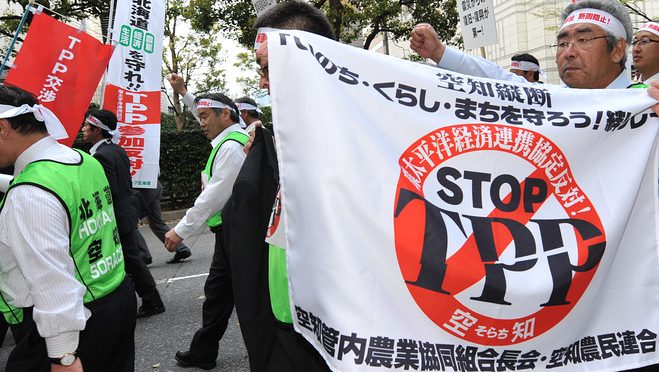 Unlike the New Silk Road, the TransPacific Partnership [TPP] and its cousin TransAtlantic Trade and Investment Partnership [TTIP ]remove all barriers for corporate takeover into our daily lives. It kills safety regulations and labor protections, curtails freedom of speech, effectively raping sovereignty of participating nations.
The New Silk Road, however, is primarily financed by the richest country today, i.e. China, and countries are not coerced into joining the age-tested system in the spirit of mutual progress and development.

Putin labels Trans-Pacific Partnership US attempt to benefit from regional trade
MOSCOW, November 6 (RIA Novosti) – The Trans-Pacific Partnership represents Washington’s bid to establish new trade and economic cooperation specifically for its own benefit, Russian President Vladimir Putin told China’s main media outlets in a Thursday interview.
“Obviously, the Trans-Pacific Partnership is just another U.S. attempt to build the architecture of regional economic cooperation that the USA would benefit from. At the same time, I believe that the absence of two major regional players such as Russia and China in its composition will not promote the establishment of effective trade and economic cooperation,” Putin argued.
The president added that evaluation of the TPP progress is complicated due to the closed nature of the talks.
“This initiative is carried out behind closed doors, even businesses and the public of the contracting states have no access to it, let alone other countries. Over the past five years of negotiations, we have repeatedly heard about the success achieved, but such statements have always been refuted later,” Putin said.
Asked whether Washington seeks to counter growing Russian and Chinese influence in the region with the TPP project, Putin stated “the free trade agreements should not fragment the multilateral trading system, but rather complement it,” stressing that “the regional unions should not be turned against each other or otherwise divided.”
The Trans-Pacific Partnership is a proposed regional free-trade agreement. As of 2014, 12 countries, including the United States, Australia, Canada, Japan and Singapore, have participated in talks on the projected deal.
According to the United States Trade Representative Office, the potential signatories to the agreement account for 40 percent of the world’s GDP and about one-third of global trade.
source »

While the Trans Pacific Partnership has been in the news, there is another sinister trade deal in the works — the Transatlantic Trade and Investment Partnership. Like the TPP, it is being negotiated in secret, with only big corporations who have all the right connections being allowed to be a party to the agreement.

Advocates of the TIPP argue that the goal of the agreement is what they call “regulatory harmonization,” echoing similar calls from the U.S. Chamber of Commerce. The idea is to standardize U.S. and European regulations on a variety of matters including finance, the environment, labor, and online data protection. Critics worry the final agreement could result in the most lax, corporate-friendly regulations for all countries involved. One potential provision is the EU’s desire for a “Regulatory Cooperation Council” that would be tasked with evaluating existing regulations and coordinating future rules. Another potential provision is the so-called “investor-state dispute settlement,” which would allow corporations to sue governments without being bound by domestic laws.

President Obama can’t have it both ways. His Secretary of State can’t make strident denunciations of climate change deniers while Obama is secretly negotiating trade deals that are undermining the very protections against climate change that John Kerry is championing. So, which is it?
And this deal undermines our sovereignty. Our rules would no longer be governed by government agencies that are accountable to the taxpayers. They would be governed by a “regulatory cooperative council” which is answerable to nobody and which would not necessarily consist of people from the US. This is the same sort of unelected control that we revolted against back in 1776. So if the Regulatory Cooperative Council decided that the EPA had to throw out its Clean Water Act because it was not corporate-friendly enough, then who will be there to protect us when pollution makes a place unlivable?

The agreement remains largely a secret, and the USTR’s Dan Mullaney has expressed the belief that negotiators need private space to negotiate in the national interest.

So by that logic, let’s close Congressional sessions, kick the press out of the White House, and not allow any outside input into proposed rules and regulations. After all, it would be in the “national interest.”

Originally posted to Stop the Police State! on Mon Mar 03, 2014 at 05:56 AM PST.
Also republished by Climate Change SOS and Foreign Relations.
source »