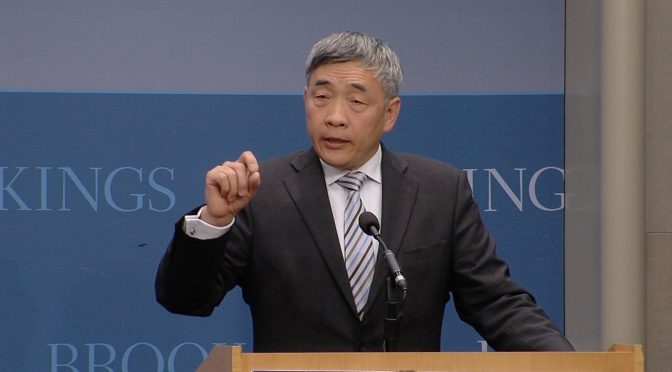 The military industrial complex continues to elicit the need for war, and  China has had enough of the US sustained antagonistic attitude over anybody threatening its “exceptional” status.
Chinese ambassador to Belgium Qu Xing takes on Zbigniew Brzezinski for US military expansionist attitude towards countries of co-equal status.
China is now officially with Russia as far the Ukrainian crisis is concern.

Western nations should heed Russia’s legitimate security concerns over the volatile situation in Ukraine, a top Chinese diplomat has said in a rare public statement on the crisis that has damaged relations between Russia and the West.
Qu Xing, China’s ambassador to Belgium, said the Ukrainian crisis came about due to the ongoing “game”– a metaphor similar to that used by US geopolitical strategist Zbigniew Brzezinski, who referred to it as the “grand chessboard” – between Russia and the West, which has not abated despite, or because of, the collapse of the Soviet Union.
[soundcloud url=”https://api.soundcloud.com/tracks/193346228″ params=”color=00cc11″ width=”100%” height=”166″ iframe=”true” /]
Read moreChina agrees to amend $3.6bn loan agreement with Ukraine
Arguing that outside interference by various powers inflamed the Ukrainian situation, Xing said Moscow would naturally feel threatened unless Western powers engaged in a more constructive approach.
Xing advised Western powers to “abandon the zero-sum mentality” in their efforts to deal with Moscow and the Ukraine crisis and “take the real security concerns of Russia into consideration,” Reuters reported, quoting state news agency Xinhua.
China in the past has urged all involved parties to sit down and negotiate for peace.
The Chinese ambassador, whose Brussels office is in the same city as NATO’s headquarters, then offered some insight as to what motivates the United States on the international stage, and what could lead to its possible decline.
“The United States is unwilling to see its presence in any part of the world being weakened, but the fact is its resources are limited, and it will be to some extent hard work to sustain its influence in external affairs,” he was quoted as saying.


Xing said Washington’s involvement in Ukraine could “become a distraction in its foreign policy.”
The Chinese diplomat’s comments represent a sharp departure from the relentless wave of hostile rhetoric coming from the West, which has gone to great lengths to blame Russia as the aggressor in the crisis.
Read moreChina outpaces America in sub numbers – US admiral
Russia has been accused of arming eastern Ukrainian militia and dispatching soldiers and armaments as reinforcement – claims Moscow has denied on numerous occasions. There were even suggestions that Russia was somehow involved in the downing of Malaysian Airlines MH17 over eastern Ukraine on July 17, 2014.
Despite the extreme nature of the allegations, no substantive evidence has ever been presented to support such claims.
Indeed, Russian Foreign Minister Sergey Lavrov has blamed the United States as being the primary destabilizing factor in Ukraine.
“Through every step, as the crisis has developed, our American colleagues and the EU under their influence have tried to escalate the situation,” Lavrov told participants at the Munich Security Conference earlier this month.
Lavrov pointed to the failure of the EU to engage Russia over Brussels’ efforts to have Ukraine sign an economic association agreement with the bloc; the involvement of Western political figures during the Maidan protests; the failure of the West to condemn Kiev for branding its own citizens “terrorists;” and for supporting a coup that led to the toppling of a democratically elected president.
[soundcloud url=”https://api.soundcloud.com/tracks/193369308″ params=”color=00cc11″ width=”100%” height=”166″ iframe=”true” /]
Read moreLavrov: US escalated Ukraine crisis at every stage, blamed Russia
“The US made it public it brokered the transit of power in Ukraine. But we know perfectly well what exactly happened, who discussed candidates for the future Ukrainian government on the phone, who was at Maidan, and what is going on [in Ukraine] right now,” Lavrov said.
China is a member of BRICS, the economic association that includes Brazil, Russia, India and South Africa.
source »
We can help bring down the Cabal and defeat the Depopulation Agenda
Big Pharma is one of the sources of funds for the Cabal. It also serves as the weapon of mass destruction via vaccine tainted with live virus it is suppose to protect us from, and the deadly chemicals use to treat our diseases that they caused through our GMO / pesticide contaminated food supply.
We can avoid using drugs, defeat any viral attack and scaremongering easily by knowing how to build our own comprehensive antiviral system. Find more about it here.