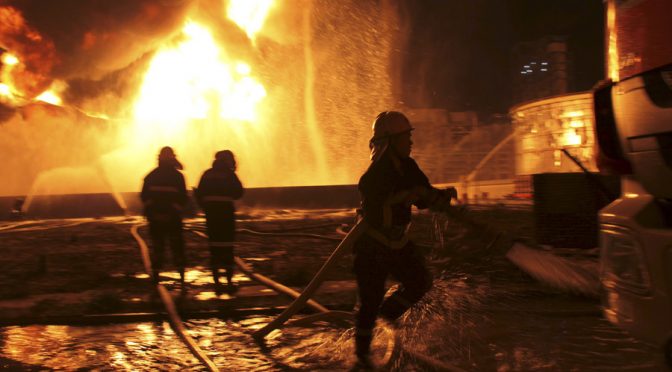 Another chemical plant with 300,000 tons of adiponitrile exploded in China at 8:50 PM last night. That’s the second chemical storage to have been blown in a week, and we are asking ourselves why after decades of unprecedented economic progress, they still haven’t learn how to do things properly.
Is that really the case here?

“The blast, which triggered a fire, happened around 8.50pm local time in Huantai county in Shandong province.

The explosion occurred at a factory of Shandong’s Runxing Chemical company which is a subsidiary of Runxing Group and has 200 million yuan ($31 million) in registered capital, Xinhua reported.

The factory produced adiponitrile, a colorless liquid that releases poisonous gases when it reacts with fire, the People’s Daily said, citing the state-run Beijing Times.

Seven fire brigades consisting of a total of 150 fire fighters and 20 fire engines were sent to the scene and fire brigades that are trained to work with fires involving chemicals are being dispatched, Xinhua said.

Windows shattered in the village where the blast occurred, state media said, and tremors reverberated within 2 kilometers (1 mile) of the site of the explosion.” reuters

Previously, there were two planes owned by the same airline that either disappeared under mysterious circumstance or  deliberately shot down after being forced to fly over an area of ongoing conflict.
Two planes for Malaysia, the country that hosted the trial for war crimes against Bush, Blair, and Cheney.
Two massive explosions for China after she devalued her currency for days. After the first hit in Tianjin, she already halted the successive devaluations, yet Bangkok Thailand exploded a day after.
All in all, there were three massive explosions here in Asia in just a span of one week. Why?
Surely, there’s more to these events than pure coincidences.
It turns out all stock indexes monitored by Bloomberg are all in red. The bombings must therefore continue. The West doesn’t have the capacity to play fair and square even at its own game. That is so clear by now.
It seems that there won’t be turning back for Asia no matter the cost.  Even a small but not a poor nation like Kazakhstan has just joined the fray and devalued her currency, too.
The financial and geopolitical dominance of the West must be ended.
Now is the time. 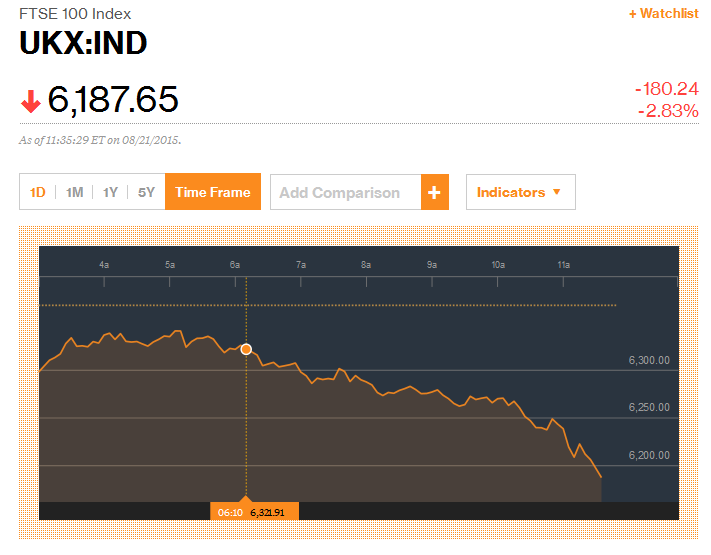 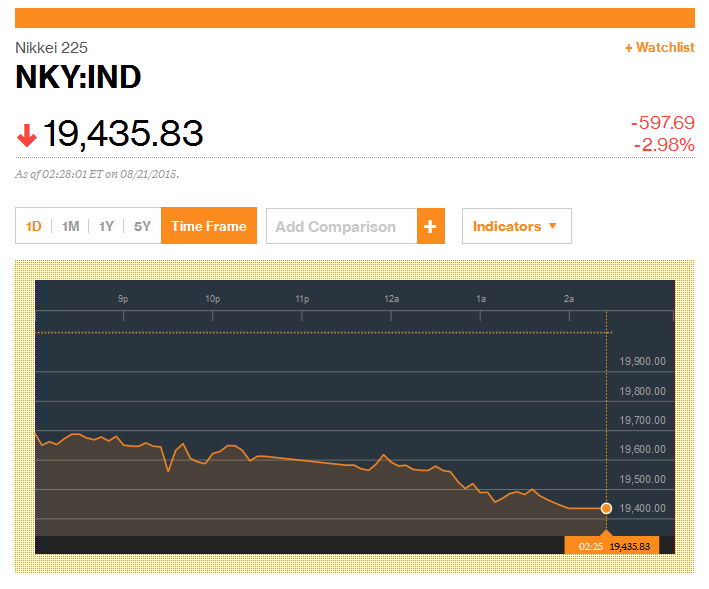 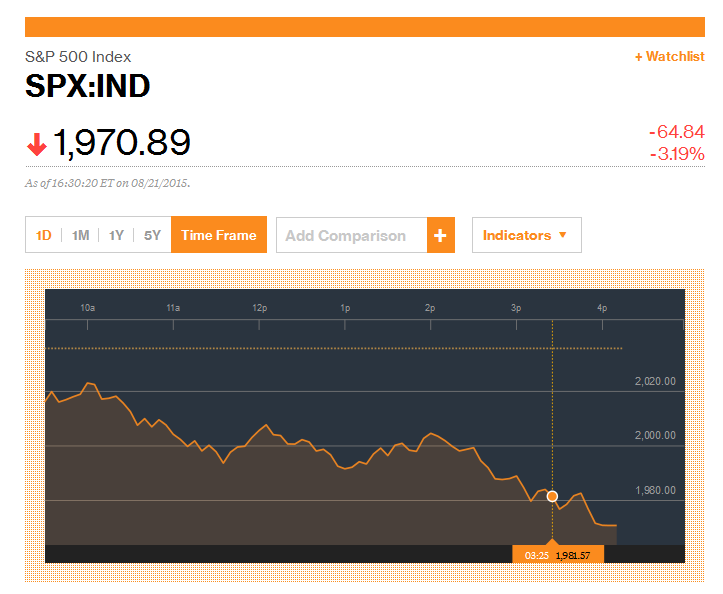 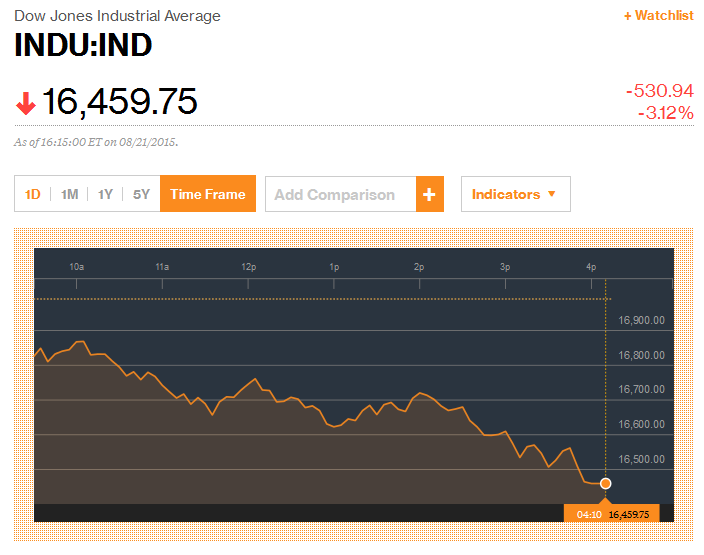 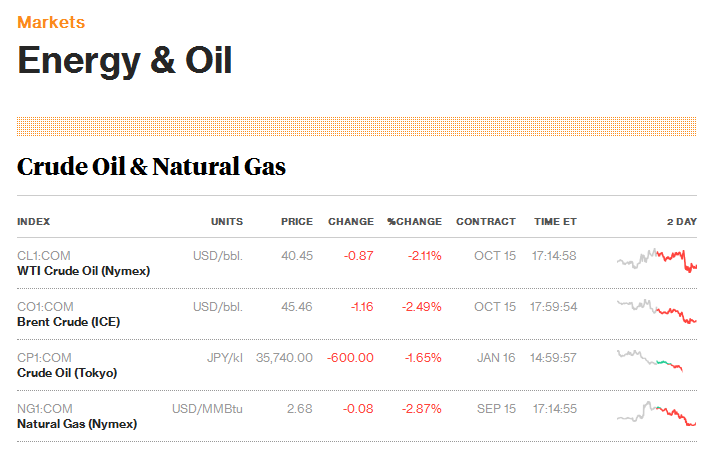 Oliver Renick
What’s so bad about an economy growing better than 2 percent a quarter to warrant the biggest stock selloff since 2011? It’s a question that interests Savita Subramanian of Bank of America and Jonathan Golub of RBC Capital Markets.
U.S. stocks this week joined foundering currencies and equities around the world as the Standard & Poor’s 500 Index tumbled 5.8 percent and the Dow Jones Industrial Average entered a correction. Until now, U.S. stocks had been a pool of tranquility amid a slowdown in China, oil’s 60 percent plunge and geopolitical wrangling in Europe.
To Subramanian and Golub, what torpedoed the market this week may be the same forces that pull it back up.
bloomberg.com
Sans conspiracy theory, here’s a standard assessment from ZeroHedge…

China’s recent mini-devaluations had less to do with her mounting economic challenges, and more to do with a statement from the IMF on 4 August, that it was proposing to defer the decision to include the yuan in the SDR until next October
The IMF’s excuse was to avoid changes at the calendar year-end and to allow users of the SDR time to “adjust to a potential changed basket composition”. It was a poor explanation that was hardly credible, given that SDR users have already had five years to prepare; but the decision confirming the delay was finally released by the IMF in a statement on Wednesday 19th.
One cannot blame China for taking the view that these are delaying tactics designed to keep the yuan out, and if so suspicion falls squarely on the US as instigators. America has most to lose, because if the yuan is accepted in the SDR the dollar’s future hegemony will be compromised, and everyone knows it. The final decision as to whether the yuan will be included is not due to be taken until later this year, so China still has time to persuade, by any means at her disposal, all the IMF members to agree to include the yuan in the SDR as originally proposed, even if its inclusion is temporarily deferred.
China was first rejected in this quest in 2010 and since then has worked hard to address the deficiencies raised at that time by the IMF’s executive board. That is the background to China’s new currency policy and what also looks like becoming frequent updates on her gold reserves. It bears repeating that these moves had little to do with her domestic economic conditions, for the following reasons:

China’s leaders have a vision, and it is a mistake to think of China solely in the context of a country whose economy is on the wrong end of a credit cycle. This is of course true and is creating enormous problems, but the government plans to reallocate capital resources from legacy industries to future projects. Rightly or wrongly and unlike any western government at this point in a credit cycle, China accepts that a deflating credit bubble is a necessary consequence of a deliberate policy that supports her future plans. She is prepared to live with and manage the fall-out from declining asset valuations and business failures, facilitated by state ownership of the banks.
Instead, to understand why she is changing the yuan-dollar rate we must look at currencies from China’s perspective. China is the world’s largest manufacturing power by far, and can be said to control global trade pricing as a result. It then becomes obvious that China is not so much devaluing the yuan, but causing a dollar revaluation upwards relative to international trade prices. She is aware that the US economy is in difficulties and that the Fed is worried about the prospect of price deflation, so lower import prices are the last thing the Fed needs. Now China’s currency move begins to make sense.
The mini-devaluations were a signal to Washington and the rest of the world that if she so wishes China can dictate the global economic outlook through the foreign exchange markets. China believes, with good reason, that she is more politically and economically robust, and has a better grasp over the actions of her own citizens, than the welfare economies of the west in the event of an economic downturn. Therefore, she is pursuing her foreign exchange policy from a position of strength. And the increments that will now be added to gold reserves month by month are a signal that China believes she can destabilise the dollar through her control of the physical gold market, because it gently reminds us of an unanswered question always ducked by the US Treasury: what evidence is there of the state of the US’s gold reserves?
China would probably live with a deferral of her SDR membership for another year, if there is a definite decision in October to include her currency in the SDR basket. That being the case, China must be tempted to increase pressure on all IMF members ahead of the October meeting. The strategy therefore changes from less passivity to more aggression over both foreign exchange rates and gold ownership over the next eight weeks. We can expect China to tighten the screw if necessary.
The stakes are high, and China’s devaluation of only a few per cent has caused enough chaos in capital markets for now. But if the eventual answer is that the yuan will not be allowed to join the SDR basket, it will be in China’s interest to increase the pace of development of the new BRICS bank instead with its own version of an SDR, selling dollar reserves and underlying Treasuries to fund it. The threat that China will turn her back on the post-war financial system and the IMF would also undermine the credibility of that institution more rapidly perhaps than the dollar’s hegemony if the yuan was accepted. And if a US-controlled IMF loses its credibility, even America’s allies will desert her, just as they did to join the Asian Infrastructure Investment Bank a few months ago.
It was always going to be the US that faced a predicament from China’s growing economic power. She has chosen to bluff it out instead of gracefully accepting the winds of change, as Britain did over her empire sixty years ago. Change in the economic pecking-order is happening again whether we like it or not and China will have her way.
And, as a reminder from 2013, here again is the “US vs China Currency War For Dummies”
http://www.zerohedge.com/news/2015-08-22/china-chooses-her-weapons
So, while China can choose its own weapon in the ongoing currency war, the West only has one, i.e. terror.