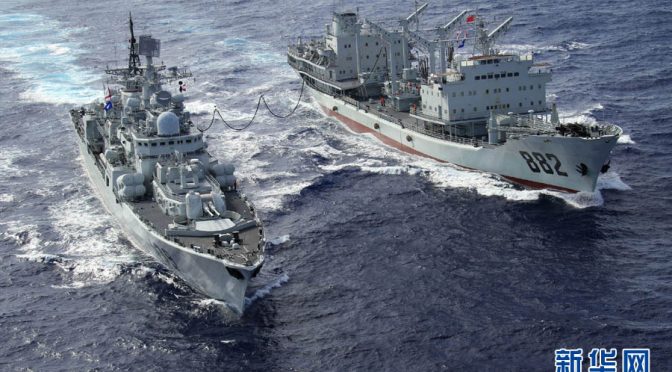 In another unprecedented move, China sends five navy ships to Alaska for reasons not even the Pentagon knows, just as she celebrates Japanese surrender in World War 2.

“The Chinese military is on display at Tiananmen Square to mark the 70th anniversary of Japanese surrender in WWII. Russian President Vladimir Putin is among over 20 leaders attending the event. It is the first time China has marked the event on such a large scale.”
Celebrating the 70th anniversary of Japan’s capitulation in WWII, China has showcased hundreds of its newest military hardware in a remarkable parade which saw some 12,000 troops marching across Tiananmen Square in front of dozens of world leaders.
Military parade in Beijing to mark 70th anniversary of end of WWII


Some 30 foreign leaders attended the memorial event, representing countries from Russia and Belarus, to Egypt, South Korea and Venezuela. The UN Secretary General Ban Ki-moon also attended the parade, while the majority of “high-profile” Western leaders have passed on the event.
Over 200 Chinese aircraft, including fighter jets, bombers and dozens of helicopters, zoomed above the fascinated crowd.China has rolled out seven types of missiles on to Tiananmen Square, including four ballistic nuclear missiles.
Among them was the Dong Feng-21D anti-aircraft-carrier medium-range nuclear missile (‘Carrier-Killer’), which currently is the world’s only ballistic missile capable of engaging a moving target out at sea.
Beijing also demonstrated the Dong Feng-26 nuclear missile, a medium-range ballistic projectile prohibited in Russia and the US because of a bilateral agreement. This intermediate range ballistic missile (IRBM) was dubbed the “Guam killer” because it can reach the US Pacific Ocean base.
The PLA also presented its newest intercontinental strategic ballistic missiles, the DF-5 with a range of 12,000 kilometers and the DF-31A – range 8,000 kilometers.

#China’s #VDay parade: Over 80% of military hardware to be shown in public for 1st time http://t.co/VMOr63bWLR pic.twitter.com/CdRZuwrzTZ


The whole event was accompanied by an army orchestra and a 2,400-strong massed choir that sang some 30 songs.
Chinese troops were not marching alone on the commemorative date: They were joined by their fellow soldiers from Belarus, Cuba, Egypt, Kazakhstan, Kyrgyzstan, Mexico, Mongolia, Pakistan, Serbia, Tajikistan and Russia.
Additionally, for the first time in the history of Chinese parades, female soldiers marched on Tiananmen Square.
Addressing the nation and guests prior to the show, President Xi Jinping reaffirmed China’s commitment to the path of peace.
“Prejudice and discrimination, hatred and war can only cause disaster and pain,” Xi said, announcing plans to reduce the number of the country’s troops by 300,000, some 13 percent of the current 2.3-million strong PLA, as part of the country’s long-term military reform.
“China will always uphold the path of peaceful development,” Xi said.
RT

Just as China celebrates the 70th anniversary of the end of World War II with an extravagant parade designed to showcase the country’s military prowess and project Xi Jinping’s power to nervous onlookers in the West, the Pentagon says it has spotted five Chinese Navy ships in the Bering Sea, just off the coast of Alaska.
Here’s WSJ:

Five Chinese navy ships are currently operating in the Bering Sea, off the coast of Alaska, the first time the U.S. military has seen such activity in the area, Pentagon officials said Wednesday.
The officials said they have been aware in recent days that three Chinese combat ships, a replenishment vessel and an amphibious ship were in the vicinity after observing them moving toward the Aleutian Islands, which are split between U.S. and Russian control.
They said the Chinese ships were still in the area, but declined to specify when the vessels were first spotted or how far they were from the coast of Alaska.
The Pentagon official said there were a “variety of opinions” on how to interpret the Chinese ships’ deployment.
“It’s difficult to tell exactly, but it indicates some interest in the Arctic region,” the official said. “It’s different.”

“Different” indeed, as in “uprecedented”, and while we won’t endeavor to jump to conclusions, we would note that the PLA hasn’t exactly been shy when it comes to challenging the US from a maritime perspective of late and of course, the US has had its ships and carriers to the east and south of China for decades, so it would appear that Xi is intent on giving Washington a taste of its own medicine.
But don’t worry, the Commander in Chief is on the scene – literally.

Finally, what better diversion from its crashing stock market on its national military holiday than for China to invade the US?
ZeroHedge

Chinese President during the Victory Day celebrations on Thursday, aimed to assure the world that China’s dramatic rise will not translate to its pursuit of unipolarity.

Xi Jinping used the speech at the event, boycotted by most western leaders, to take a swipe at the US.
“We Chinese love peace. No matter how much stronger it may become, China will never seek hegemony or expansion. It will never inflict its past suffering on any other nation,” Xi said speaking on a rostrum overlooking Beijing’s Tiananmen Square.
Xi also announced on Thursday that Beijing would cut troop levels by 300,000, a 13 per cent cut in one of the world’s biggest militaries.
“Prejudice and discrimination, hatred and war can only cause disaster and pain,” he said.
Thursday’s parade, one of the biggest ever, was overseen by the president, in the company of world leaders including Russia’s Vladimir Putin.
In the South China Sea, Beijing has pushed a very expansive definition of its maritime zone of control leading to friction with US-backed Japan and Philippines.
China is now the world’s second largest GDP. Although its growth is slowing, it is still expanding at triple the rate of the US, EU economies.
China on Thursday displayed a host of new armaments ranging from intercontinental ballistic missiles to medium-long range bomber aircraft in a massive parade in Tiananmen Square.
About 12,000 troops, World War II veterans, and nearly 1,000 foreign troops from 17 countries marched in the parade, marking the 70th anniversary of the victory of China over invading Japan and the end of the second world war.
Eighty-four per cent of the 500 pieces of armaments of over 40 types on show at Thursday’s parade were displayed in public for the first time. While inspecting the rows of troops ahead of the parade, Xi reached out to the soldiers addressing them as “Hard-working comrades!”
Nearly 200 aircraft flew above the Tian’anmen Square in 10 echelons during the parade as guests, that included Russian President Vladimir Putin, South African President Jacob Zuma and South Korean President Park Geun Hye, looked on.
Major Chinese cities including Beijing, Shanghai, Nanjing, Guangzhou were occupied by the invading Japanese army during the war.
“In that devastating war, the Chinese People’s War of Resistance Against Japanese Aggression started the earliest and lasted the longest,” the Chinese President said in his address on Thursday.
“This great triumph opened up bright prospects for the great renewal of the Chinese nation and set our ancient country on a new journey after gaining rebirth,” he added.
China suffered over 35 million casualties and the Soviet Union lost more than 27 million lives, claimed Xi.
The Chinese leader described the events during the war as “a decisive battle between justice and evil, between light and darkness, and between progress and reaction.”
Beijing says Japan has yet to confront atrocities it committed after invading parts of China in the 1930s.
The conflict, commonly known in China as the War of Resistance Against Japanese Aggression, led to the death of some 20 million Chinese, according to Beijing’s estimates. It ended with Tokyo’s World War II defeat in 1945.
China has earlier urged Japan to “make a clean break with militarism” and build trust with its neighbours after Premier Shinzo Abe last year honoured more than 1,000 convicted war criminals as “martyrs” who laid the foundations for modern Japan.
Chinese President Xi Jinping and his BRICS counterparts from India and South Africa, Pranab Mukherjee and Jacob Zuma earlier in May attended a grand military parade held in Moscow to mark the 70th anniversary of Russian victory in World War II.
The Ufa declaration of the 7th BRICS Summit in July also makes references to the 70th anniversary of the defeat of Nazi Germany, “fascism” & “militarism” during World War II and denounces attempts to rewrite history but stops short of mentioning Japan.
“We express our commitment to resolutely reject the continued attempts to misrepresent the results of World War II. While remembering the scourge of war, we highlight that it is our common duty to build a future of peace and development,” said the joint BRICS communiqué.
TBP and Agencies
One of the significant sources of funds for the fascist Nazionist Jesuit Khazarian Mafia is the healthcare industry which registered a whopping $3.09 trillion in 2014, and is projected to soar to $3.57 trillion in 2017, in the US alone.
We can help take down the Dark Cabal by avoiding drugs, defeat any viral attack and scaremongering easily by knowing how to build our own comprehensive antiviral system. Find more about it here.