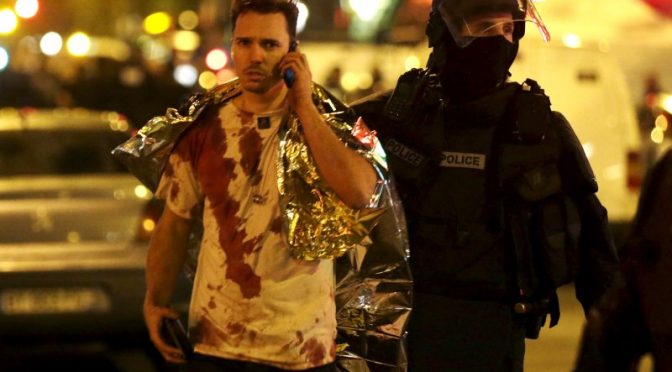 The giant psychological warfare operation, where “ISIS terrorists” allegedly killed over a hundred people in Paris, on Friday the 13th, November, 2015, was just part of ongoing horse trading towards a world government.

by benjamin
November 17, 2015
The giant psychological warfare operation, where “ISIS terrorists” allegedly killed over a hundred people in Paris, on Friday the 13th, November, 2015, was just part of ongoing horse trading towards a world government.
To understand this, let us look at some key events surrounding the events in Paris.
First of all, the fact that thousands of witnesses all carrying video phones were unable to record the events of that day alone proves it was just a massive propaganda event, NSA and other sources agree. In addition, all 8 security camera feeds to the areas where the supposed massacres took place had been shut off, implying high level cooperation from the French security police, CIA sources say.
Next, let us look at what has resulted from this event. France has implemented martial law and closed its borders. This is classic Gladio strategy whereby a manufactured terror incident is used to implement a military government.
Furthermore, the French have been pushing, through their proxy Christine Lagarde, head of the IMF, to replace the US dollar with the IMF’s SDR. This is to be decided at a meeting on November 30th.
November 30th is also the day when 120 or so world leaders, including those of Russia, the US and China, are to gather in Paris to “discuss global warming.” As anybody who actually checks facts knows, “global warming” has nothing to do with scientific truth and everything to do with forming a world government. The idea is to finance this world government with a global “carbon tax.” The world itself is not warming and even if it was it would be due to solar cycles and not CO2.
However, the events in Paris and unreported but even more dramatic events in the Middle East are, nonetheless, part of some very serious infighting between various factions struggling to dominate the world government that is being negotiated.
There is also conflicting evidence about exactly who staged the events in Paris and other similar psy-ops that are appearing with increasing regularity.
The Russians, still furious about the shooting down of their airplane on Halloween (October 31st), say it was the same people behind that as were behind the events in Paris. Russian President Vladimir Putting is saying he will “not deal with the dog that has bitten him, it is the owner of the dog who will be held responsible.”
According to the Russians the owner of this particular “dog,” is
continue reading