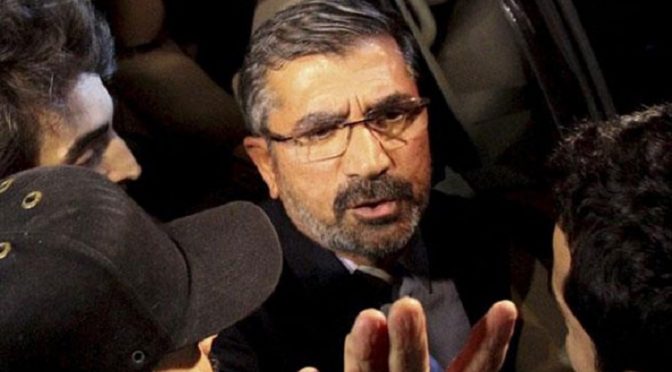 As we have expected, Erdogan has begun thinning down the ranks of his political enemies, which is a major part of the crackdown that will eventually lead to his own downfall soon.

The false flag assassination of Tahir Elci by plainclothes state agents will certainly spark anger within the Kurdish population who sees the human rights lawyer as their virtual spokesman for articulating their legitimate interests when everybody else in the Kurdish PKK leadership is accused of preference to the sound of a gun.
The staged assassination was made to look like Kurdish militants were firing on the police just after Tahir Elci made a speech before the media. Plainclothes state agents then responded by firing their hand guns towards the direction of the victim. One policeman was sacrificed to make the whole show believable.


Why would plainclothes state police be present at the time of his speech? Are they tagging along the would-be victim all the time?
How did the alleged Kurdish militants knew who to shoot when the state police agents at the scene were in plainclothes?
Why would Kurdish militants initiate a shooting match right in front of one of the highly respected leaders in their community, a staunch campaigner in fact for Kurdish rights?
Certainly, it is not the Kurdish community that has the right motivation to do so as it is already gaining political power even from results of the last elections, while the entire Erdogan government is certainly losing integrity at home and abroad due to its shooting down of one warplane and its pilot, and the now public knowledge of ISIS oil and arms smuggling collusion.
It is easy to speculate then that state police were themselves posing as Kurdish militants, fired their guns near the end of the victim’s speech to trigger panic and sacrificed one of their own to legitimize the crossfire that will conveniently hit the victim’s head.
Fueled by oil and blinded with a grand delusion to revive the Ottoman Empire, Erdogan commits his 3rd blunder for the week. For Erdogan, ordering the assassinations of all his political rivals is much easier than ordering the shooting down of any Russian plane.
If the Kurdish community starts to mobilize as it is doing right now and link arms with the journalists currently under state suppression, the Erdogan government will be forced to proclaim a state of emergency to legitimize a much wider crackdown that will then trigger bigger mass movements across the country.

Turkish police have attacked protesters in Istanbul who were furious at the killing of prominent Kurdish lawyer and rights activist Tahir Elci.
Security forces fired tear gas and water cannon to disperse hundreds of people demonstrating in the city on Saturday, chanting, “Shoulder to shoulder against fascism,” and, “Tahir Elci is immortal.”
Similar protests were reported in other cities across the country, including in the city of Diyarbakir.
The lawyer was shot dead by gunmen earlier in the day in Turkey’s mainly Kurdish province of Diyarbakir, where he was giving a press statement.
According to witnesses, Elci was killed by a single bullet while a policeman was also killed in an exchange of fire that followed.
“The moment the statement ended, the crowd was sprayed with bullets,” said Omer Tastan, a local official from the pro-Kurdish Peoples’ Democratic Party, also known as the HDP, adding, “A single bullet struck Elci in the head.”
Dogan News Agency reported that two police officers sustained injuries when an investigative team went to visit the site of the attack and came under fire.
The HDP denounced Elci’s murder as a “planned assassination” and called for a protest move. However, Prime Minister Ahmet Davutoglu said it is still unclear whether the lawyer was caught in crossfire or assassinated.
“In the place left by Tahir Elci, thousands more Tahir Elcis will carry on the work in the struggle for law and justice,” the party said in a statement, accusing the ruling Justice and Development Party (AKP) and its media of targeting the lawyer.
Turkan Elci, wife of Kurdish lawyer and the president of Diyarbakir’s Bar Association Tahir Elci, reacts moments after her husband was shot dead in Diyarbakir, November 28, 2015. (AFP photo)
Turkish officials insist that the rights activist was not the target of the attack as Interior Minister Efkan Ala said at a news conference where Justice Minister Bekir Bozdag was present that a gunfight broke out after someone opened fire at police from an unidentified car.
“Tahir Elci was caught up in fire between police and terrorists,” he added, without saying whether any arrest was made.
A curfew has been declared in the area after the incident and a probe has been launched into the incident.
Elci had been harshly criticized for saying that the Kurdistan Workers’ Party (PKK) is not a terrorist group on CNN Turk TV. He was detained in October for alleged “terrorist propaganda” pending trial.
Tahir Elci, the head of Diyarbakir Bar Association (2nd R), is escorted by plainclothes police officers as he leaves his office in Diyarbakir, Turkey, October 20, 2015 in this photo. (Reuters photo)
Turkey has been engaged in large-scale military operations against the PKK across the mainly Kurdish southeastern and eastern regions of Turkey, and in northern Iraq, since a two-year ceasefire broke down in July.
The operations began in the wake of a deadly bombing in the southern Turkish town of Suruc, an ethnically Kurdish town located close to the border with Syria, on July 20, killing over 30 people.
The Turkish security forces and the PKK have since been engaged in a series of tit-for-tat attacks.
http://www.presstv.com/Detail/2015/11/28/439521/Turkey-Istanbul-police-Tahir-Elci-Diyarbakir