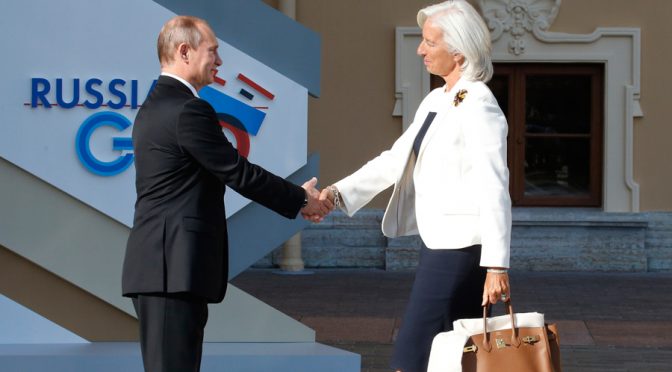 States with standing, overdue loans do not qualify for a new IMF loan. IMF, in violation of its own rules, just lifted the ban on loan to states with overdue accounts, particularly Ukraine .
The Fund is said to be giving Ukraine a new loan tranche which includes condition of Kiev not to pay Russia.

The Fund’s great excuse is that, they are not in the business of managing debt of different currency other than the US dollar. This, of course, is grossly inconsistent with its SDR basket of currency exchange administration.
Ukraine’s overdue debt to Russia through the IMF is at $3 billion. Russia, during the G20 meeting in Turkey, offered a staggered 3-year payment of $1 billion each year from 2016 to 2018, which Putin thought is far more generous than the IMF’s terms.
Biden, in his recent visit to Poroshenko, promised to assist the Nazi regime of up to $190 million in aid without clear oversight, just like the increased military budget of $800 million for ISIS protective mission in Syria. What about the deteriorating state of the economy back home Mr. Vice President?
“We are aware of that, Mr. CG.” That’s why Putin was right when he said…
“It is strange. If they (western partners) are so confident in the solvency of the country (Ukraine) for the next year they could have taken part in sharing those risks within 4 years. I don’t understand it,” President [Putin] said.
Putin is wisely using the system’s own rules to defeat its enemies, and as this case will show, even the IMF was forced to change its own rules along the way to suit a bigger Nazionist agenda, one of which is the planned return of Khazarians to Ukraine, the old seat of the Khazarian Empire.

by Michael Hudson specially for the Saker Blog
On December 8, the IMF’s Chief Spokesman Gerry Rice sent a note saying:
“The IMF’s Executive Board met today and agreed to change the current policy on non-toleration of arrears to official creditors. We will provide details on the scope and rationale for this policy change in the next day or so.”
Since 1947 when it really started operations, the World Bank has acted as a branch of the U.S. Defense Department, from its first major chairman John J. McCloy through Robert McNamara to Robert Zoellick and neocon Paul Wolfowitz. From the outset, it has promoted U.S. exports – especially farm exports – by steering Third World countries to produce plantation crops rather than feeding their own populations. (They are to import U.S. grain.) But it has felt obliged to wrap its U.S. export promotion and support for the dollar area in an ostensibly internationalist rhetoric, as if what’s good for the United States is good for the world.
The IMF has now been drawn into the U.S. Cold War orbit. On Tuesday it made a radical decision to dismantle the condition that had integrated the global financial system for the past half century. In the past, it has been able to take the lead in organizing bailout packages for governments by getting other creditor nations – headed by the United States, Germany and Japan – to participate. The creditor leverage that the IMF has used is that if a nation is in financial arrears to any government, it cannot qualify for an IMF loan – and hence, for packages involving other governments.
This has been the system by which the dollarized global financial system has worked for half a century. The beneficiaries have been creditors in US dollars.
But on Tuesday, the IMF joined the New Cold War. It has been lending money to Ukraine despite the Fund’s rules blocking it from lending to countries with no visible chance of paying (the “No More Argentinas” rule from 2001). With IMF head Christine Lagarde made the last IMF loan to Ukraine in the spring, she expressed the hope that there would be peace. But President Porochenko immediately announced that he would use the proceeds to step up his nation’s civil war with the Russian-speaking population in the East – the Donbass.
That is the region where most IMF exports have been made – mainly to Russia. This market is now lost for the foreseeable future. It may be a long break, because the country is run by the U.S.-backed junta put in place after the right-wing coup of winter 2014. Ukraine has refused to pay not only private-sector bondholders, but the Russian Government as well.
This should have blocked Ukraine from receiving further IMF aid. Refusal to pay for Ukrainian military belligerence in its New Cold War against Russia would have been a major step forcing peace, and also forcing a clean-up of the country’s endemic corruption.
Instead, the IMF is backing Ukrainian policy, its kleptocracy and its Right Sector leading the attacks that recently cut off Crimea’s electricity. The only condition on which the IMF insists is continued austerity. Ukraine’s currency, the hryvnia, has fallen by a third this years, pensions have been slashed (largely as a result of being inflated away), while corruption continues unabated.
Despite this the IMF announced its intention to extend new loans to finance Ukraine’s dependency and payoffs to the oligarchs who are in control of its parliament and justice departments to block any real cleanup of corruption.
For over half a year there was a semi-public discussion with U.S. Treasury advisors and Cold Warriors about how to stiff Russia on the $3 billion owed by Ukraine to Russia’s Sovereign Wealth Fund. There was some talk of declaring this an “odious debt,” but it was decided that this ploy might backfire against U.S. supported dictatorships.
In the end, the IMF simply lent Ukraine the money.
By doing so, it announced its new policy: “We only enforce debts owed in US dollars to US allies.” This means that what was simmering as a Cold War against Russia has now turned into a full-blown division of the world into the Dollar Bloc (with its satellite Euro and other pro-U.S. currencies) and the BRICS or other countries not in the U.S. financial and military orbit.
What should Russia do? For that matter, what should China and other BRICS countries do? The IMF and U.S. neocons have sent the world a message: you don’t have to honor debts to countries outside of the dollar area and its satellites.
Why then should these non-dollarized countries remain in the IMF – or the World Bank, for that matter. The IMF move effectively splits the global system in half,between the BRICS and the US-European neoliberalized financial system.
Should Russia withdraw from the IMF? Should other countries?
The mirror-image response would be for the new Asian Development Bank to announce that countries that joined the ruble-yuan area did not have to pay US dollar or euro-denominated debts. That is implicitly where the IMF’s break is leading.
http://thesaker.is/the-imf-forgives-ukraines-loan-to-russia/