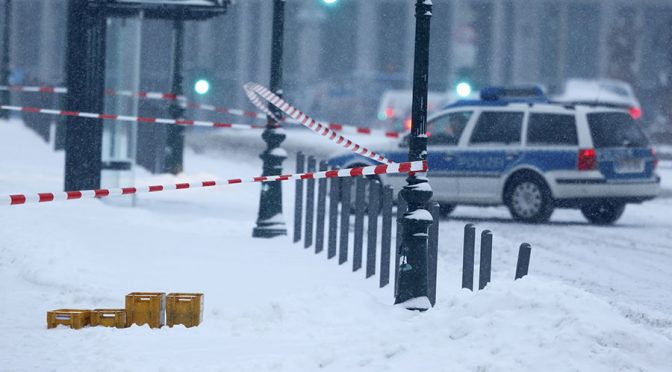 The Bilderbergers appoint presidents not out of stellar qualifications but on the virtue of the person being heavily compromised and easily steerable.
All of these Western leaders have dark secrets that are being used as leverage by the power behind the throne to advance their own agenda of global dominance.

Germany, on the other hand, can use a little bit of intimidation. Fresh from being extorted by the Erdogan’s government with $3 billion anti-refugee flooding, it’s now Riyadh’s turn to send four “mysterious” packages right into Merkel’s doorsteps, you know, to force Germany’s retraction from its initial lip service condemning Al-Nimr’s unjustified execution days ago.

Germany’s Vice Chancellor Sigmar Gabriel has warned Saudi Arabia that the European Union heavyweight will review its sales of military equipment to Riyadh following the internationally-condemned mass execution of 47 people by the kingdom.
“We must now review whether in future we should take a more critical stance” on selling arms to Saudi Arabia, Gabriel, who is also Germany’s economy minister, said on Monday.
Berlin has in the past refrained from selling the Heckler & Koch G36 assault rifle and other offensive military weapons to Saudi Arabia.
On Friday, the Saudi regime executed prominent Shia cleric Sheikh Nimr al-Nimr, a senior opposition figure, and 46 others for what is called undermining national security of the kingdom.
The move was condemned as a violation of human rights across the globe.
Saudi Arabia severed diplomatic relations with Iran following demonstrations held in front of the Saudi embassy in Tehran and its consulate in the northeastern city of Mashhad by angry protesters censuring the Al Saud family for the killing of the top cleric. Some people mounted the walls of the consulate in Mashhad while incendiary devices were hurled at the embassy in Tehran. Some 50 people were detained over the transgression.
Meanwhile, German Chancellor Angela Merkel’s spokesman Steffen Seibert called on both Saudi Arabia and Iran to make every effort to improve their diplomatic ties, emphasizing that Saudi-Iranian ties are “of fundamental importance for resolving the crises in Syria and Yemen and for the stability of the entire region.”

Germany’s opposition Greens and Left parties demanded that Berlin halt all military exports to Saudi Arabia, which reached 209 million euros ($226 million) in 2014, the last full year for which data is available.
Asked whether Germany planned to sanction Saudi Arabia, Seibert stressed that “it is in the interest of Germany to have dialogue with Saudi Arabia.”
French Foreign Minister Laurent Fabius, meanwhile, has also called for a “de-escalation of tensions” between Riyadh and Tehran, government spokesman Stephane Le Foll said.
“France has an important role in this region as an interlocutor with all the parties,” Le Foll said following a cabinet meeting.
The deteriorated diplomatic relations between Riyadh and Tehran “is hugely concerning because of course we want to see stability in the Middle East… not least because that will be absolutely essential for solving the crisis in Syria which is the source of so many of these problems,” said British Prime Minister David Cameron.
“We condemn and do not support the death penalty in any circumstances and that includes Saudi Arabia.”
http://www.presstv.com/Detail/2016/01/04/444490/SArabia-Germany-Gabriel-Riyadh-Berlin-Nimr/

Angela Merkel office sealed off due to suspicious package

The office of German Chancellor Angela Merkel has been sealed off after the discovery of a suspicious package, Reuters reports citing a police spokesman. The mail box was later discovered to be harmless, and police have given the all-clear.
“We are investigating a suspicious package,” a police spokesman told Reuters earlier. An eyewitness also informed the agency there were four yellow plastic crates visible in the sealed-off area.
The spokesman added that the package had been discovered in the course of a routine patrol at 8:30 local time.
Several hours later, the police informed reporters that “the experts found nothing suspicious.”
Four yellow crates resembling mail boxes were described by eyewitnesses as being inside the sealed off area. The German channel N24 earlier cited police as saying the objects were indeed mail.
The news comes as Europe is on high alert over a sharp rise in terrorist attacks – the most recent major one being the November 2015 attacks in Paris, which claimed 130 lives. Since then, a string of threats and alerts have been coming in across the continent.
Compounding this problem is the huge influx of refugees created by the fighting in the Middle East and North Africa. As Europe tries to prove to the world its commitment to its values and accept more refugees, the potential threat of terrorism is growing with the influx. This has led authorities to intensify already draconian checks, with an increased focus on Muslims. Many experts worry this is creating a vicious cycle of radicalization in Europe.
https://www.rt.com/news/328051-merkel-office-package-alert/
Germany under Merkel can easily be dictated using her Hitler background. The package is meant to remind her of that fact.
So, in spite of initial rhetoric, she will never impose any sanctions against the House of Saud. The global geopolitical vaudeville continues undeterred.