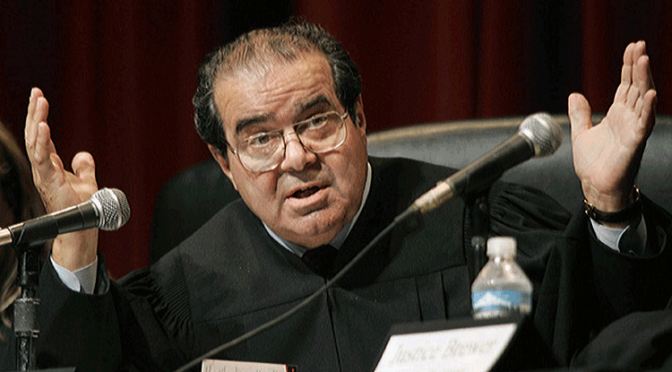 Judge Scalia’s murder is not just to silence a dissenting jurist but to warn all those who are moving to reinstitute the constitutional republic of the united States of America.

Even the immediate family of the murdered Judge Scalia is not able to express their disgust, or are deliberately being silenced.
If Bernie Sanders will keep pestering on the Clintons’ ambition to reoccupy the White House, he, too, could be murdered soon.
The Clintons have invested so much on this objective with countless body bags for decades now [here], in much the same way as the Khazarians at the Wall Street and Texas have invested so much on the Clintons.
Here are the facts so far on the Scalia murder:

“I used to be an instructor in the homicide school. Every death investigation you are handling, you consider it a homicide until the investigation proves otherwise”

There are hundreds of possible motivations, but the most pressing ones are:

All that’s happening today is just the repeat of what had happened back in the 1960’s when Asia collaborated with John F. Kennedy for a better world, ultimately costing the patriotic president’s life.
There will be more murders in the foreseeable future for as long as the Khazarians are not completely neutralized as parroted by the so-called US Patriots.
As far as the Khazarians are concerned, they are still on course with their globalist ambitions.

Whatever the case might be, there is nothing in the upcoming US presidential election that could help improve on the lives of the Americans. The best and ultimate solution is always to shut down the corporate government and a return to 1776.
That’s how America was made great, and that’s how it will be made great again.