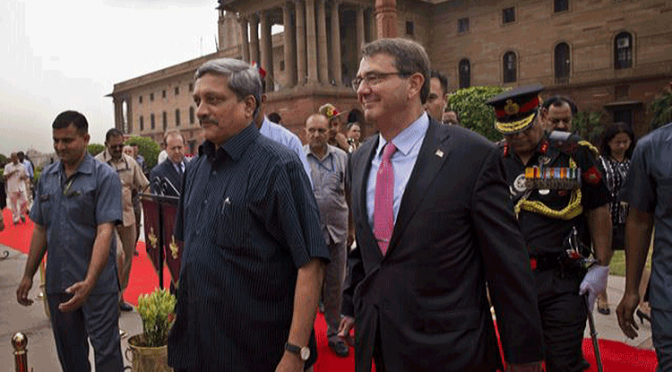 The United States suffered a major blow in the South China Sea when India refused the US invitation to join its naval patrols in the area.

India has ruled out participating in joint patrols in the South China Sea proposed by the United States. Experts say that India wants to focus on containing Chinese influence in the Indian Ocean and despite a growing strategic partnership, it remains wary of being part of a military alliance with Washington.
The proposal that the navies of Japan, Australia and India could join the U.S. in preserving freedom of navigation in the contested waters of South China Sea was voiced recently by chief of the U.S. Pacific Command, Admiral Harry B. Harris.
But within days, Indian Defense Minister Manohar Parrikar said, “As of now, India has never taken part in any joint patrol; we only do joint exercises. The question of joint patrol does not arise.”
http://www.voanews.com/content/india-rejects-joint-naval-patrols-with-us-in-south-china-sea/3231567.html
This continuing US provocation against China is in parallel with its desperate efforts to divide the BRICS Alliance though political machinations in Brazil, and with continuing economic sanctions against Russia with the EU.
Mainstream media are proposing so many theories as to why India is assuming a non-provocative stance against China right now. They forgot that India is part of the BRICS Alliance, has benefited more when at peace than being antagonistic against China, and the country has assumed the leadership this year from Russia.
The continuing exposure of the rogue elements within the United States government has further limited its overall geopolitical clout in almost every critical region of the globe.
In Syria, the Russian-US brokered ceasefire is still holding up. While civilians in Raqqa are now rising up against the fleeing terrorists. Those terrorists that are still inside Syria are not only fighting against the Russian-led coalition but also against each other as key leaders are either dead, or have already escaped through the US and Turkey rat lines for future CIA terror operations.

6 thoughts on “India Refuses to Join US Naval Patrol vs. China”