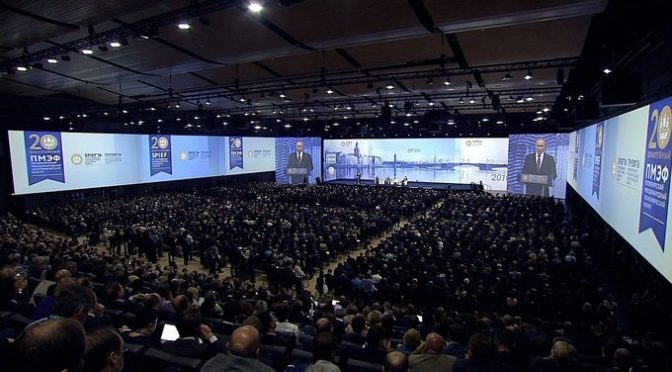 During his speech, Vladimir Putin underscored the need for large scale cooperation through the full use of available technologies, instead of the regressive economic sanctions thrown at Russia’s doorsteps.

If you decide to ignore the video above, you will miss the part [1:26:47] where Putin retorted how can America considers itself as a democracy when twice it happened when the superdelegates decided the outcome of the elections instead of the majority of its people, in response to CNN analyst Fareed Zakaria’s offensives, and more.
It’s very obvious from this very large gathering of key industry personalities that a sizable number of industrialists prefer global peace with the BRICS Alliance rather than being antagonistic with it.
These progressive leaders need our support especially in dealing with the highly destructive moves of the Khazarian Mafia everywhere.
From RT,

The 20th International Economic Forum in St. Petersburg has kicked off. Political and business leaders have come to sign new contracts and agree deals. RT.com will keep you updated on the main events.