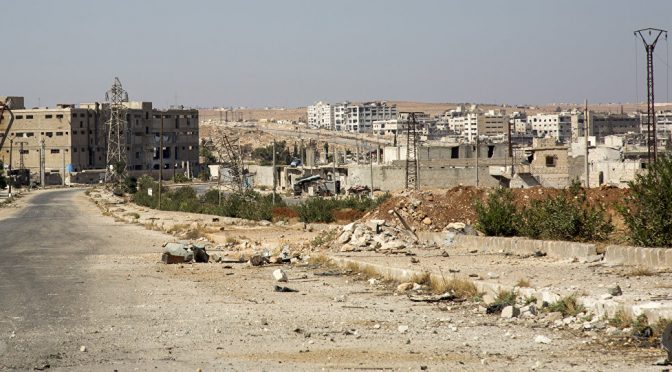 About 600 CIA terrorists were pardoned and allowed to leave East Aleppo without arms. This is the only way the Russian-led coalition could save as many lives as possible, at leat 90,000 during this final battle to save Aleppo, and completely free the city from all mercenaries by the year end.

50% of the city has now been recovered and Russia is now sending demining equipments to clean the city of landmines left by the terrorists. And soon, the Western mainstream media will run out of arguments in support of the US-led coalition invasion of the country.

“People are leaving eastern Aleppo. And in western Aleppo people are killed by militants operating in the western part of the City. There will be a moment when media and government fueling this conflict will not be able to do that. This is because there are thousands of refugees who can tell the truth about what is happening in Syria,” he said.

According to le Corf, many people are starting to understand that everything they have been told about the Syrian war was not reality but a “well-developed media construction.”
In the near future, media will face the “lack of arguments” because there will be evidence from local residents. “Media continue to use its business model. It invents stories about warplanes dropping bombs on civilians for no reason.
But there will come a day when mainstream media will face the lack of arguments because people living here and the situation on the ground will turn against those arguments,” he concluded.
Read more: https://sputniknews.com/middleeast/201611301048004228-aleppo-liberation-french-activist/

The Syrian army has liberated 16 districts in east Aleppo populated by 90,000 residents during a three-day operation, the Russian General Staff said.
“Over the past three days, Syrian army units supported by militia have managed to clear 16 quarters in the northern part of eastern Aleppo of militants,” Lt. Gen. Sergei Rudskoy said, adding that 1,007 settlements had joined the Syrian ceasefire, and that over 100,000 residents returned there.
Over 18,000 civilians left terrorist-controlled areas of Aleppo as a result of the Syrian army’s successful operation, the Russian military added.
“As a result of the the Syrian army’s successful advance, the militants’ system of battle positions has been broken. More than 18 thousand civilians were able to leave areas controlled by terrorists of Aleppo,” Rudskoy, the chief of the Russian General Staff Main Operational Directorate, said.
Russian jets have not conducted airstrikes in Aleppo since October 18, the General Staff said.
“The Russian Aerospace Forces have stopped flights around Aleppo since October 18, for a total of 44 days. The Russian combat jets are flying at least at the 10-km radius around the city.”
He said that terrorists destroy schools, hospitals and mosques in Aleppo to accuse Syrian aviation and artillery of the attacks.
“Social infrastructure [in Aleppo] is completely destroyed. According to eyewitnesses’ evidence, terrorists mine and blow up schools, hospitals and mosques. The footages of destroyed buildings are being given to Western human rights watchdogs under the guise of the results of strikes by Syrian aviation and artillery,” Rudskoy said.
Moreover, Russia has sent a demining squad to Aleppo. According to Rudskoy, over 200 Russian servicemen and 47 pieces of combat and special equipment will be deployed for mine clearing in Aleppo.
Russian Defense Ministry’s experts will check the sites where mustard gas is possibly being produced, Rudskoy said.
https://sputniknews.com/middleeast/201611301048013095-militants-east-aleppo/

One thought on “90,000 East Aleppo Residents Saved from CIA Terrorists”