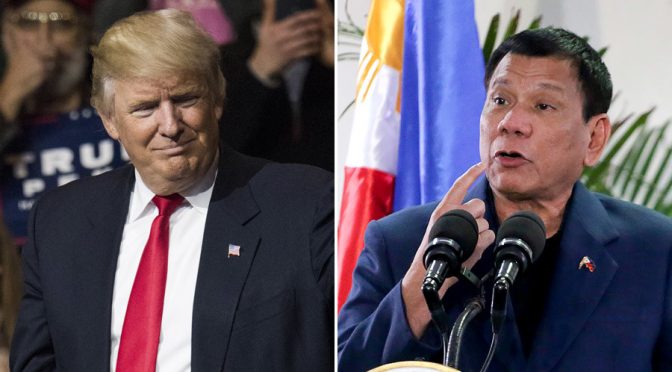 Philippine President Rodrigo Duterte disclosed some of the things he talked about with US president-elect Donald Trump, last night.
Said conversation was said to be arranged by “Trump’s Philippine business partners and a core group of advisers, including his children.”

https://www.youtube.com/watch?v=JrqKi2NqLjs
Duterte says felt rapport with Trump, assures U.S.-Philippines ties intact
By Martin Petty and David Brunnstrom |
MANILA/WASHINGTON Philippines leader Rodrigo Duterte described as “encouraging” his phone call with U.S. President-elect Donald Trump on Friday, during which he felt a rapport between them and gave assurance that ties were intact, despite a period of rocky relations.
Trump’s seven-minute chat with the firebrand Philippine president follows months of uncertainty about one of Washington’s most important Asian alliances, stoked by Duterte’s hostility towards President Barack Obama and repeated threats to sever decades-old defense ties.
Duterte’s anger was unleashed following Obama’s concerns about possible human rights abuses in his war on drugs, during which more than 2,000 people have been killed.
Duterte said Trump was “sensitive” and understanding about his crackdown and was encouraged by what he interpreted as Trump’s indication he would not interfere.
“I could sense a good rapport, an animated President-elect Trump. And he was wishing me success in my campaign against the drug problem,” Duterte said in comments his office released on Saturday.
“He understood the way we are handling it … I supposed that what he really wanted to say was that we would be the last to interfere in the affairs of your own country.”
He added: “We are doing it as a sovereign nation, the right way. And he wishes us well. And I said that, well, we assured him of our ties with America.”
http://www.reuters.com/article/us-philippines-usa-idUSKBN13R20P
Weeks ago, President Duterte recalibrated his “separation from the US” with reduced military exercises with the latter. This is to provide a “face-saving” measure for the country’s Defense Secretary Lorenzana who already made some commitments to his US counterpart.
The Philippine government is now talking peace with the communist rebels and the secessionist factions in Muslim Mindanao. Both sides prefer that the country be freed from all elements of the US military occupying at least five military camps.
Meanwhile, while Trump committed a “grave diplomatic mistake” when he called on Taiwan’s pro-independence president, angering China for violating the “One China” policy, the Chinese Coast Guard turned over two out of four Filipino fishermen who were “lost at sea” within the disputed area, due to bad weather. The other four may have drowned according to the survivors.
Said “nice gesture” was a first in years, according to the Philippine Coast Guard who appreciated the expression of goodwill.
https://youtu.be/mopZaFYRdMQ?t=2m37s
Duterte invites Trump to next year’s ASEAN summit where the former will the new chair.
These recent events illustrate the fact that peace is really not impossible among nations of diverse cultures, especially when leaders are ready to talk constructively instead of forcing one’s own view of what the world should be.
The big question right now is: Will Donald Trump be making good on his “drain the swamp” campaign rhetoric once he formally assumes office come January next year?