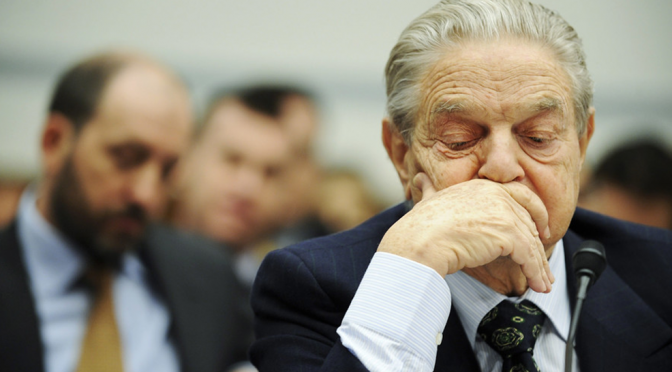 Call it by any other fancy names, but Corporate Tyranny continue to be exposed for what it truly is, worldwide. Behind it all are big bankers and financial assassins, willing to send taxpayer-funded armed mercenaries into countries unwilling to participate in their self-immolation.
One of the most notable financial assassins is the dying George Soros.

Bryan MacDonald, an Irish journalist based in Russia
George Soros, the Hungarian-born billionaire who has meddled in politics across Europe and North America for decades, is angry. The world he campaigned for is falling apart, and now he’s busy looking for leaders to indict.
According to Soros, liberal democracy is failing all across the western world. Apparently, this is because what he calls the “open society” is in crisis. Now, he may very well be right about this, but pinning it on Angela Merkel seems somewhat bizarre. Especially when she is painted as being inadvertently in league with Vladimir Putin. But, nevertheless, it’s the German chancellor he regards as most culpable for why voters have become disenchanted with modern democracy.
Writing in a widely published New Year op-ed, Soros traces the current European crisis back to the crash of 2008. He laments how “Germany emerged as the hegemonic power in Europe, but it failed to live up to the obligations that successful hegemons must fulfill, namely looking beyond their narrow self-interest to the interests of the people who depend on them.”
Then he harks back to the 1940’s. “Compare the behavior of the US after WWII with Germany’s behavior after the Crash of 2008,” he observes. “The US launched the Marshall Plan, which led to the development of the EU; Germany imposed an austerity program that served its narrow self-interest.”
This is very unfair to Berlin. The difference here is that the Marshall Plan followed the most destructive war humanity has ever known, and the US was not practicing pure benevolence either. It was acting in naked self-interest, because it feared all of Europe turning communist. And despite Marxist Moscow helping to win the conflict, it was abundantly clear that the USSR and the US would compete for global domination in the new world order of the time. Thus, the US was creating a buffer zone against the Soviets and bolstering allies it would need for its own protection, and for the maintenance of the capitalist system it promoted.
Germany’s situation in 2008 was rather different. Berlin was not seeking to become a global superpower, and the public was not pushing for it either. Also, there was no ideology in play, other than a belief that countries should live within their means. Furthermore, Germany had recently completed a costly reunification, and its economy was only returning to growth after a decade of near stagnation. For the average German in 2008, the last thing on their mind was becoming Europe’s hegemonic power.
Soros’ attack on Germany is probably borne out of personal frustration over Merkel’s lack of willingness to push for further European integration. Yet, this policy is merely a reflection of what her electorate wants. Miserly Germans are unable to countenance financially supporting profligate southern Europeans. As a result, the Euro currency project, which Merkel’s predecessor Helmut Kohl was basically forced into by France, has always had a questionable long-term future.

What’s in it for George?
If we believe Soros’ back story (and many have questioned it), he pushes liberal democracy for perfectly valid reasons. “The formative experience of my life was the occupation of Hungary by Hitler’s Germany in 1944,” he writes. Later, of course, this regime was replaced with a totalitarian communist system before he fled Budapest in 1947.
In his op-ed, Soros tells us that his experiences in Britain and the United States taught him how “open societies” are the only ones which guarantee the safety of their people. Indeed, the Hungarian may be right about this. However, where he has long failed is in understanding the reasons why some countries are not ready for the kind of liberalism he espouses.
Let’s remember how he chucked millions of dollars into pro-western movements in Ukraine. A man born and raised in neighboring Hungary should have been well aware of how divided the country was, and known that his actions could lead to turmoil. Especially given that his homeland has a stake in the southwestern part, where Hungarian is often the spoken language. Yet, he ploughed ahead, and his actions helped to destroy the country.
The billionaire now says “the only explanation I can find (for the electorate’s rejection of globalization/liberalism) is that elected leaders failed to meet voters’ legitimate expectations and aspirations and that this failure led electorates to become disenchanted with the prevailing versions of democracy and capitalism. Quite simply, many people felt that the elites had stolen their democracy.”
Yes, this is really George Soros writing. The same George Soros who attends Davos every year. Because, if you were looking for a symbol of where the elites and the plebs most diverge, it would probably be at the annual World Economic Forum in the Swiss mountain commune. Where the rulers of the world look down on us mere mortals from the highest town in Europe (at 1,560 meters).

Angela Angst
But Soros then decides to pin a large part of the blame on a figure who has never been much of a cheerleader for Davos – Merkel. And he goes on to predict the demise of the EU itself.
“With economic growth lagging and the refugee crisis out of control, the EU is on the verge of breakdown and is set to undergo an experience similar to that of the Soviet Union in the early 1990s.”
The reason for the EU’s impending doom is apparently the 2017 election cycle, where the contests in Germany, the Netherlands, Italy, and France will be key. In the latter, “the two leading contenders [Marine Le Pen and Francois Fillon] are close to Putin and eager to appease him,” according to Soros.

French people sacrifice their own interests to help Putin win the world? (Op-Edge by @27khv) https://t.co/qctrsI5Dtn

So, now we are finally on to Putin. Soros feels that if either Le Pen or Fillon wins, “Putin’s dominance of Europe will become a fait accompli.”
He writes: “I am particularly worried about the fate of the EU, which is in danger of coming under the influence of Russian President Vladimir Putin, whose concept of government is irreconcilable with that of open society.”
This is because “Putin is not a passive beneficiary of recent developments; he worked hard to bring them about.”
Put plainly, the notion that Putin somehow engineered the French election to organize a contest between Fillon and Le Pen (which is still not guaranteed) is preposterous. But this is the trauma-filled world Soros now inhabits. And he goes on to make another ridiculous statement:
“In a brilliant move, he [Putin] exploited social media companies’ business model to spread misinformation and fake news, disorienting electorates and destabilizing democracies. That is how he helped Trump get elected.”
In other words, Soros thinks Putin manipulated Facebook and Twitter to win the US election for Trump.
This argument is ridiculous and makes Soros look stupid. It also suggests that he’s throwing his rattle out of the pram because a few democratic decisions have gone against him. And he needs to denigrate Merkel and use Putin as a bogeyman in order to deflect any mud from himself.

But lets look at the reality here. Soros strongly opposed George W. Bush’s presidency. He funded the ‘Move On’ project and threw millions upon millions at the Democratic Party. What this interference did was help remove them from their working class base and transform them into a globalist party, which now seems to win only in coastal metropolitan areas. Shorn of a need to fund-raise to the same extent as before, leftists used Soros’ money to focus on ‘identity politics’, which alienates the white working class. And that same blue-collar group voted overwhelmingly for Trump this fall.
For his own part, Soros, ironically at Davos, predicted that Trump had no chance of being elected president. And he was wrong. Now it appears he can’t deal with the outcome. Perhaps because he feels his life’s work is slipping away.

8 thoughts on “George Soros’ World is Falling Apart, Blames Everyone but Himself”