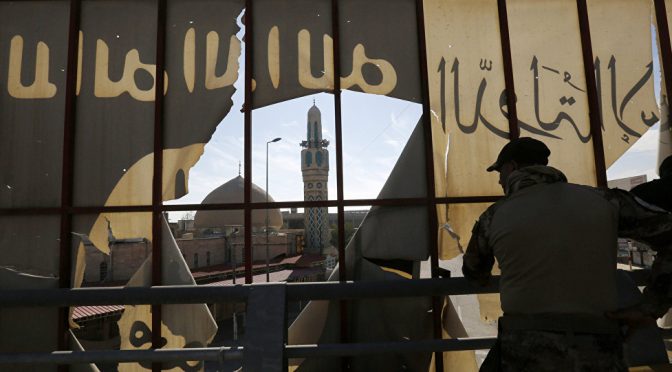 Whenever Daesh adds to its tragic litany of “lone wolf” and/or “network” attacks – in Manchester, Paris, London, Nice, Berlin – the West rages against those “evil losers” (copyright Donald Trump).
by Pepe Escobar
Whenever the West’s formidable military machine adds to its tragic litany of “collateral damage” – in Libya, Yemen, Somalia, the tribal areas in Pakistan – silence reigns. No Muslim full names on front pages.
Whenever NATO-GCC proxies add to their own tragic litany of premeditated massacres – across Syria, across Iraq – the perpetrators are excused because they’re “our,” “moderate” rebels and freedom fighters.
This inexorable, perverse, logic won’t be altered. Now with a twist, because President Trump has explained to a startled world, via his Islamophobe speechwriter Stephen Miller, it’s all Iran’s fault.
Trump professed his faith while swearing over a glowing orb nestled in Riyadh, the alma mater of all forms of Wahhabi or Salafi-jihadi terror.
And he professed his faith after he had just sold a multi-billion dollar fresh batch of weapons to the bling House of Saud totalitarian theocrats.
These weapons will be used by the House of Saud to wipe Yemen off the face of the earth; deepen a Sunni-Shi’ite fratricide war on all fronts, and further enable their handpicked “freedom fighters” in Syria.
It’s never enough to repeat, over and over again, that Daesh and the House of Saud are both cadaverous faces of the same Medusa-stamped coin; totalitarian theocracy, implementable by jihad.
The US establishment or deep state, as well as the UK’s, will never admit it. So many weapons deals, so little time.
And who, in the West, pays, in blood, for this vicious, depraved circle?
Teenage girls in Manchester. To mournfully quote Morrissey, Marr in their Smiths apex: “Fresh lilaced moorland fields / Cannot hide the stolid stench of death.”
The Deterritorialized Caliphate
Daesh strategists couldn’t care less about that glowing orb — counter-information center — in Riyadh (nor could the House of Saud, for that matter). Holed up in a “Syraq” desert waiting lounge, eager to soon capture the brand new American hardware – call it the Saudi Rat Line — they have come up with alternative plans.
In both Mosul and Raqqa, Daesh is not lying down waiting for extermination. Protected by loyal, local, pious tribes, battle-savvy engineers and technicians have been dispatched to the middle of nowhere in the desert straddling “Syraq.”
The strategy has been fine-tuned in Sirte, Libya, in the Sinai mountains, and now across “Syraq.” Because the privileged battleground, from now on, is infidel European lands.
On the Western front, Daesh can count on myriad EU-resident instant jihadis, radicalized on the internet, plus a selected network of mosques and madrassas financed by the proverbial, wealthy GCC donors.
The Manchester bomber fits a juicy profile: a British-born subject of Libyan descent, with an indirect connection (alleged secret trips to Syria) to the Hillary Clinton-approved Libya-Syria Takfiristan rat line. The connection implies a crossover from al-Qaeda to Daesh, because the original rat line featured the Libya Islamic Fighting Group (LIFG), affiliated to al-Qaeda and fully supported by Washington and London.
And then, Daesh can count on the specialists leading from behind.
Every Western intel agency assumed there would be up to 6,000 jihadi casualties in Libya by now. Not really; only a few hundred. That’s the consequence of an organized retreat – which has freed Daesh to engage in pinpointed search and destroy missions; desert guerrilla warfare. As the de facto Libyan civil war keeps unfolding, Daesh will find secure ways to smuggle new waves of battle-experienced jihadis across the Mediterranean.
Those few left to die for the cause in Mosul pose a different problem. Documents found at Mosul University detailed a crude chemical weapons program, developed in loco, including experiments with nerve agents on prisoners. One needs specialists to conduct such experiments – and many may be Westerners. Where are they? They have been smuggled deep inside the middle of nowhere “Syraq” desert between Deir Ezzor and al-Qaim.
Propaganda remains relentless. The latest Daesh video, released last week, features Western jihadis, including an American, Abu Hamza al-Amriki. They call for vengeance after “women and children were killed by savage US bombing.” Thus, according to their logic, it’s “fair” to kill Western civilians – including girls in Manchester.
The video also features new Dash DIY equipment fabricated in Mosul province – from drones to homemade rocket launchers.
So, strategically, Daesh is fast adapting to the new battleground; it’s all about fighting the missiles and phosphorous bombs of the “crusaders” with increasing waves of lone wolf suicide bombers.
Daesh may have been expelled, or be on the way to be expelled, from Fallujah, Sirte, Mosul and Raqqa. Enter the Deterritorialized Caliphate; ghost nodes in desert patches along the Euphrates, in the Libyan desert, in the Sinai mountains.
This goes way beyond a Battle of Mosul or a Battle of Raqqa.
This goes way beyond a Trump administration Guns-for-Dollars policy enacted to the benefit of a cash-hungry industrial-military-surveillance complex.
And this goes way beyond a lethally clueless Trump believing that a Sunni “Arab NATO” composed of petrodollar despots bent on smashing Shi’ite Iran – and its allies – is bound to lead the way to “peace” between Arabs and Israel.
Daesh does not care about any of these geopolitical nuances. The prodigal sons of Wahhabi Salafi-jihadism are now the deterritorialized Walking Dead. Talk about a nifty division of labor; as their progenitors gorge on US weaponry, their mission to spread the “solid stench of death” across the West ever expands.

One thought on “Daesh and the West's Solid Stench of Death”