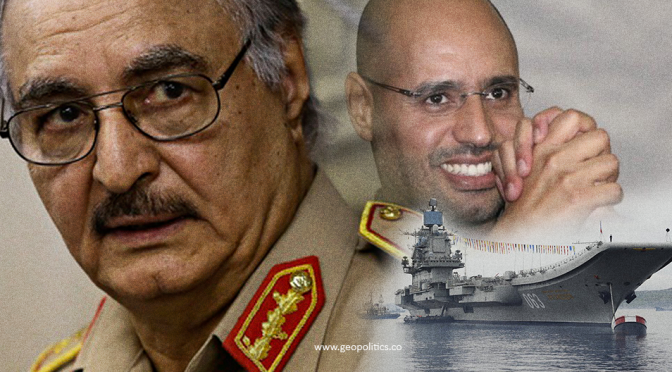 Back in 2015, Vladimir Putin made a fiery speech at the UN, indicting the Obama administration for the destruction of Libya, and the murder of Muammar Gaddafi, among other geopolitical high crimes.

This was just a prelude to what Russia did just 2 days after that.
In September 30th of that year, the Russian Aerospace command launched the most decisive attack on the Islamic State positions in Syria which led to the destruction of the long convoys of oil tankers that were used to smuggle cheap Syrian oil into Europe.

For Putin, that was not enough.
In the succeeding G20 meeting, Putin also exposed the 40 countries who have been financing ISIS by way of purchasing cheap oil, and stolen Syrian historical and cultural treasures, from the group.

After tipping the balance in favor of the Syrian Army with the successful recovery of the key cities Aleppo, Palmyra and Homs, Vladimir Putin is looking at resolving the Libyan stalemate.
Russia established a direct contact with Khalifa Haftar, “a powerful warlord who controls not only the eastern part of the war-torn country, but also most of its vast oil deposits.”

“On January 11, 2017, Commander of the Libyan National Army Marshal Khalifa Belqasim Haftar paid a visit to the heavy aircraft-carrying cruiser Admiral Kuznetsov, traveling to its home base as part of the Northern Fleet’s air carrier group,” the statement said.
Khalifa Haftar, “a powerful warlord who controls not only the eastern part of the war-torn country, but also most of its vast oil deposits.”

Five months after that initial contact, the group of the renegade Gen. Khalifa Haftar has issued a general pardon to Muammar Gadaffi’s son, Saif al-Islam Gaddafi, 44, and was released last Saturday after being captured while trying to flee Libya in 2011.

The most prominent son of slain Libyan leader Muammar Gaddafi has been released from prison according to a statement released by the Abu Bakr al-Siddiq Battalion in Libya’s Zintan. The statement did not disclose his current location due to fears for his safety.
Saif al-Islam Gaddafi, 44, was released on Saturday after he was captured and imprisoned by fighters from Zintan while attempting to flee the country to neighbouring Niger back in 2011 when opposition fighters seized Tripoli.
His release comes as part of a general pardon issued by the government in the city of Tobruk backed by renegade General Khalifa Haftar, one of two rival administrations based in Libya.
The second of Muammar Gaddafi’s nine children, Saif al-Islam had been seen by many before the 2011 uprising as his father’s heir apparent and the second-most powerful man in Libya.
Saif al-Islam remained prominent throughout the violence that gripped Libya in the wake of the Arab Spring. There were numerous allegations against him of torture and extreme violence against opponents of his father’s rule. By February 2011, he was on a United Nations sanctions list and was banned from traveling.

What this means is, Russia will be using the same formula it has been using in Syria, i.e. to let the people decide for themselves what course to take for their own future.
Saif al-Islam Gaddafi is expected to facilitate the reunification of the Libyans who are now tired and weary of Western “democracy.”


Libya used to be one of few countries with sovereign central banks. Muammar Qaddafi, President of the African Union at that time, was planning to issue gold denominated African dinar to replace Francs in Francophone Africa, to help his African brothers from centuries of economic plunder.

But that’s not all.
The West just hated Muammar Qaddafi’s internal policies which were kept from the rest of the world by the Rothschild controlled mainstream media.
Here’s some of them:

These things Qaddafi was doing while the West maintains its exceptionalist mindset even when the Western population is yet to enjoy the same set of privileges from its own government.

It would take decades to restore Libya to its former glory, and its full recovery will be hampered further with the impending resumption of US military operations under the Trump administration.
As we’ve been witnessing in more than one occasion, the Western Deep State is not keen on allowing any self-determination schemes anywhere. So, it has now instructed the Trump administration to resume the US military operation in Libya under the guise of eliminating ISIS terror in the country.
But we can still see how the US forces are firing at the Syrian Army and civilians in real time, while allowing the escape of ISIS terrorists from Raqqa, just so they could occupy, without bloodshed between them and their own terrorist proxies in the city, for the effective partitioning of Syria.
We can, therefore, expect the same scenario in Libya in the foreseeable future.
So, while Russia is helping its own energy industry competition in the Middle East to recover and free themselves from the clutches of the Anglo-Roman Empire, the West is doing its best to grab us much foreign land and resources as possible, even when everybody is looking.
America does not need to make itself great again above the dead bodies of the colored people. It only needs to rid itself of the Deep Swamp.