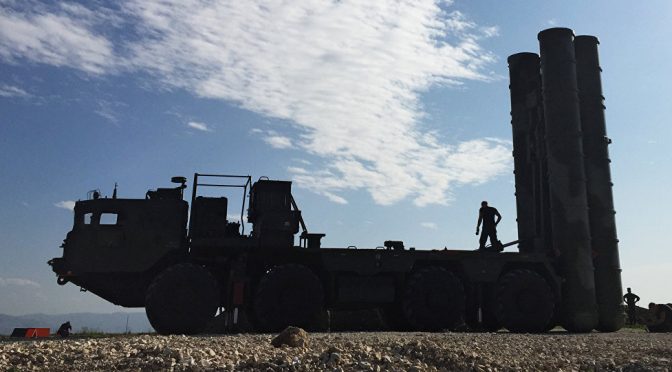 Russia is warning the US forces on the ground of Syria that it will intercept any aircraft interrupting Syrian Army operations against Daesh, using S-400 missiles. The downed Syrian aircraft was conducting airstrikes against Daesh positions south of Tabqa, Raqqa province.
In addition to the warning, Russia is also suspending its cooperation under the earlier agreed upon deconflicting zones with US coalition forces.
The Russian statement is in response to the message sent by the US coalition requesting the former to deescalate the unwarranted aggression that the latter has started, hours ago.

The Russian MoD is demanding that a “thorough investigation by the US command with the provision of its results and measures taken.”
“The destruction of the Syrian Air Force aircraft by US aviation in Syrian airspace is a cynical violation of the sovereignty of the Syrian Arab Republic,” the Russian ministry said.

“The repeated hostilities of US aviation against the legitimate armed forces of a UN member state under the guise of ‘combating terrorism’ are a gross violation of the international law and, in fact, a military aggression against the Syrian Arab Republic.”

The Russian Defense Ministry said that the US F-18A fighter jet downed the Syrian Air Force’s Su-22 by launching an air-to-air missile. The US coalition airstrike on a Syrian fighter plane was in response to the deaths of Daesh leadership, a few days ago.

The Russians are contemplating of returning the favor, i.e. S-400 missile interception on any aircraft from the US side. If ever that will happen, that would be the end of this journey.

“In areas where Russian aviation is conducting combat missions in the Syrian skies, any flying ojects, including jets and unmanned aerial vehicles of the international coalition discovered west of the Euphrates River will be followed by Russian air and ground defenses as air targets,” the Russian Defense Ministry announced.

Independent experts who personally went into Syria to investigate the situation on the ground have considered the US armed intervention in the country as an invasion, and not a civil war.

More than 5 million people have fled Syria since the conflict began, and half of them are children https://t.co/KqbW5ZzeoO #RefugeeDay pic.twitter.com/UPcYbPoVOg

3 thoughts on “Russia Halts Deconfliction Zone Agreement with US, Will Intercept Uninvited Aircraft”