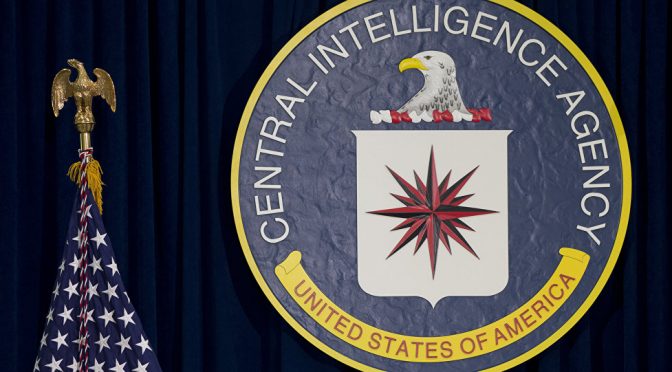 Newly declassified CIA documents emphasize the agency’s significant role in the 1953 coup d’etat in Iran. While the CIA-led operation is still regarded by Washington as a “success,” it actually led to dire consequences for both Iran and America, RIA Novosti contributor Vladimir Ardayev wrote.
Washington has a long record of regime change operations, RIA Novosti contributor Vladimir Ardayev writes; however, each time the US meddled in foreign state affairs, it then had to cope with the whirlwind it had sown.
Last week the US State Department released declassified documents shedding light on the role Washington played in the 1953 coup against the Iranian government of Mohammad Mosaddegh.

“The uprising of Aug. 19, 1953, in Tehran, organized by CIA agents with the participation of Muslim clergy led to the replacement of the legitimately-elected cabinet headed by Prime Minister Mohammed Mossadegh with the government of General Fazlollah Zahedi — the protégé of Western intelligence services,” Ardayev wrote.

The journalist pointed out that at that time Washington pursued two goals: first, to prevent the rise of the Tudeh, the Communist Party of Iran; second, to abolish the nationalization of the oil industry in Iran that endangered the interests of the UK, America’s strategic ally.
Although the two goals were closely interconnected the oil issue obviously dominated the agenda, the journalist pointed out.
In the 20th century Middle Eastern crude remained a major factor determining the West’s policy in the region, Ardayev wrote, adding that American and British corporation had for decades controlled hydrocarbon reserves in the Middle East.
However, in the middle of the 20th century the Gulf realms exerted pressure on oil corporations demanding a larger share of oil revenues.

“When the US firm in Saudi Arabia bowed to pressure in late 1950 and agreed to share oil revenues evenly with Riyadh, the British concession in Iran came under intense pressure to follow suit. But London adamantly refused,” Bethany Allen-Ebrahimian of Foreign Policy magazine wrote.

The UK’s refusal prompted then Prime Minister of Iran Mohammad Mossadegh to nationalize Iran’s oil industry in early 1951.
In response, Britons began mulling over the regime change operation to oust the democratically elected Iranian prime minister together with US intelligence services.
The oil issue became the trigger of the chain of events that resulted in the CIA-orchestrated coup in Iran. Simultaneously, Washington and London sought to prevent the rise of Communists in the Middle Eastern country.

“Ever since the assassination of General Razmara in March 1951, and the subsequent impasse and diplomatic break with Britain over the oil negotiations, the Iranian situation has been slowly disintegrating. The result has been a steady decrease in the power and influence of the Western democracies and the building up of a situation where a Communist takeover is becoming more and more of a possibility,” a memorandum from CIA Director Dulles to US President Eisenhower written on March 1, 1953, read.

To complicate matters further, following the diplomatic break with London, Mossadegh made an attempt to build bridges with the Soviet Union. The potential USSR-Iranian alliance prompted deep concerns among American and British policymakers.

“The new Soviet regime has not only agreed to a doubling of Soviet-Iranian trade but has also joined in negotiations for a general settlement of outstanding issues between the two countries. These developments have raised the possibility that Mossadegh might bolster his popular prestige by obtaining concessions from the USSR and have indirectly lessened the pressure on him to curry favor with the US,” a CIA document dated Aug. 12, 1953, read.

To tackle the problems of the “Communist threat” and the Soviet influence in Iran, Washington had worked out a detailed plan, Ardayev noted.
The plan envisaged military, economic, diplomatic and psychological measures. In addition, it described so-called Special Political Operations “directed toward counteracting and reducing Tudeh influence.”
These operations included anti-Tudeh propaganda, “psychical attacks,” administrative and security actions against the party (with the assistance “certain [Iranian] political and military leaders”), publishing anti-Tudeh material in the press and etc.

The CIA involved Iranian “religious leaders” and “strong tribal elements” to fight both against the Communists and the Mossadegh government, Ardayev emphasized.

However, it was only a prelude to the CIA-led coup d’état, he noted, referring to the notorious Operation Ajax of August 1953.
The operation was launched on Aug. 15, 1953. Although the Americans convinced Shah Mohammad Reza Pahlavi to depose Mossadegh, the latter managed to stop the coup at the initial phase.
It prompted the CIA to abolish the operation.

“Operation has been tried and failed and we should not participate in any operation against Mossadegh which could be traced back to US…. Operations against Mossadegh should be discontinued,” a newly declassified cable written on Aug. 18, 1953, read.

However, the aforementioned cable was ignored by Kermit “Kim” Roosevelt Jr., a top CIA officer in Iran and a grandson of former US President Theodore Roosevelt.
Roosevelt, who was in charge of Operation Ajax got in touch with one of the coup leaders, General Fazlollah Zahedi, and instigated mass protests with the assistance of Iranian religious and tribal leaders. Thus, the CIA seized the initiative from Mossadegh and completed the regime change operation.

“As a result of the coup, the monarchy in Iran was restored, the democratically elected leader of the country was imprisoned, the nationalization of the oil industry was abolished,” Ardayev emphasized.

It appeared that the major goals of the US-British conspiracy were achieved.
Alas, the situation led to a chain of undesirable consequences.

“After toppling Mossadegh and defeating the Communists, the organizers of the coup also suppressed other liberal forces in the country,” the journalist highlighted. “As the clergy gained more and more power in Iran, the anti-Western sentiment began to grow.”

“In 1979, it resulted in the Islamic revolution, the seizure of the US embassy, and the suspension of diplomatic relations between Iran and the United States,” Ardayev wrote.
So, what is the lesson of the “successful” 1953 coup?

Whether one likes it or not, the whirlwind of a 38-year long bitter confrontation between Washington and Tehran was sown in 1953, when the natural course of history in one country was forcibly interrupted and altered by another country — the United States, Ardayev stressed.