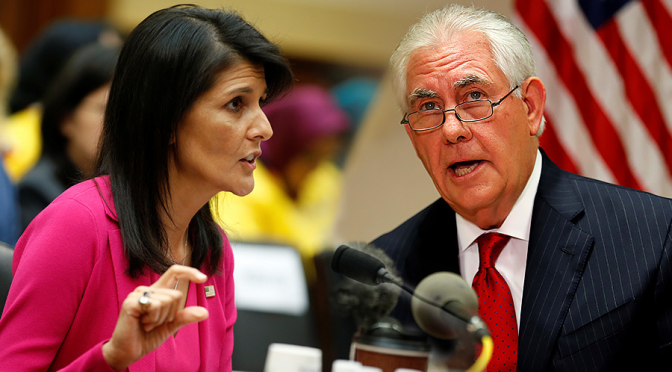 The United States has been upgrading its armed intervention in Syria from using terrorist proxies branded as “moderate rebels” to an actual ground invasion using regular troops. To provide the pretext to enter Syria with larger contingents than the presently cloaked US commandos already assisting the terrorists, it has gone on a propaganda overdrive.

RT | 29 Jun, 2017 11:07
The US information campaign on Syria is a warning sign that an American-led intervention may be in the works, Russian Foreign Ministry spokeswoman Maria Zakharova said.
“The campaign, which was started by the US and is being backed by London and Paris, on the alleged chemical attack that is claimed to be prepared by Damascus, is not original, it’s a textbook script, which has already been used in several countries in the region,” Zakharova said.
In 2013, for example, “a provocation with the alleged use of chemical weapons became an excuse for a [potential] direct Western intervention in Syria. The situation was salvaged only by Russia’s decisive stance,” the official said.
Following the incident in April of this year, when the US leadership claimed a chemical weapons attack had been carried out by Syrian government forces in Khan Shaykhun, Washington is not doing anything that hasn’t been seen before, Zakharova added.
“The current information attack is very likely a warning sign of an intervention. The story will be the same: an incident happens on the territory controlled by the terrorists, civilian casualties follow. The so-called opposition – de facto the same jihadists, not very different from IS [Islamic State, formerly ISIS/ISIL] and Al-Qaeda, but who are still getting help from the US and allies – announce yet another ‘crime by the regime,’” Zakharova said.
The Foreign Ministry spokeswoman even pointed out potential locations for such incidents: Sarrakab and Ar-Riha, where Moscow “believes that such a staged [chemical weapons] attack is being prepared.”
The US’ claims on an alleged chemical attack being prepared by Damascus aren’t only aimed against the Syrian authorities, but also against Russia, the Zakharova said.
“The situation seems to be a massive provocation, both military and information-wise, a provocation which targets not only the Syrian leadership, but also Russia,” the spokeswoman said.
“These accusations and threats sound cynical amid the background of the blatantly illegal activities of the US-led anti-ISIS coalition fighting against the sovereign state of Syria,” the official added, referring to the US attack in April on the Shayrat airbase, as well as “mass civilian casualties in the coalition strikes in Raqqa and elsewhere.”
“Only during Ramadan, AFP reported the death toll of 500 civilians, who weren’t connected to the terrorists in any way,” Zakharova said.
On Wednesday, Moscow warned Washington against any “incendiary, provocative action” in Syria, stating there is no threat from the Syrian military.
Russia’s deputy foreign minister, Gennady Gatilov, slammed the potential action as “unacceptable” and something that “breaches Syria’s sovereignty [and] isn’t caused by any military need.”
It came after the White House claimed on Monday that the Syrian government was gearing up for a chemical attack, and threated that the country’s leadership would “pay a heavy price,” should the supposed attack take place.
Also on Monday, the Pentagon issued a statement that the US had spotted “activity” at Shayrat airfield that showed “active preparations for chemical weapons use.”
The US did not offer any further explanations or evidence that such an attack was due to happen, though, and State Department spokesperson Heather Nauert rebuffed questions on the issue as “an intelligence matter.”
On Wednesday, the US suggested that the Syrian leadership had promptly changed its mind about an alleged attack. Defense Secretary Jim Mattis, as cited by Reuters, said: “it appears that they [Syria’s authorities] took the warning seriously. They didn’t do it.”
The Syrian authorities have repeatedly denied any allegations against them, as has the Russian leadership.
The threats over the alleged upcoming chemical attack are a message to Russia and Iran from Washington and other parties, which want a share in the outcome of the war on terrorism, which is coming to an end, political analyst Seyed Mostafa Khoshcheshm believes.
“The first person who did that was Macron in France, when he said that regime change in Syria is no more a prerequisite, unless something like a chemical attack is launched. This means an invitation to the terrorist groups to conduct such an attack,” Khoshcheshm told RT.
“They are sending a message to Iran and Russia that, if you give us a share, its fine; we would come to the upcoming political talks over Syria, otherwise we would turn the table. They are threatening that they are going to allow terrorist groups to conduct a chemical gas attack on the Syrian people and then they would use it as a false flag attack to justify their intervention.”

As previously posted, the present conflict in Syria is not a civil war, but a US-led invasion, and is meant to enlarge the present Israeli real estate.

3 thoughts on “US Preparing for Ground Invasion in Syria”