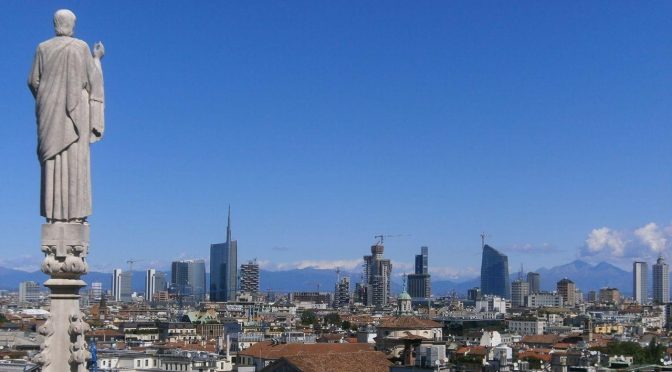 There’s another round of economic recession in the West by year end, unless tangible and profound reforms are implemented. This is the grave warning that’s being repeated again by the Executive Intelligence Review.

What Must Be Done Before Another Bank Crash Hits

Tuesday, July 25, 2017
The warning of another, devastating Europe-U.S. banking crash before the end of this year, raised by EIR in May and by a meeting of European Parliamentarians in early July, is becoming an emergency danger. It requires a mobilization of actions to stop it.
The Italian banking system, which has just suffered three major bank bailouts combined with “bail-ins” of unlucky savers, is trying to raise capital it cannot raise, to prevent a potential collapse which could take Germany’s banks down with it. U.S.-based banks have $2 trillion of exposure to that looming collapse of bad debt and worse derivatives, centered in London.
Those Wall Street banks, unpunished and bailed out since 2008, have rapidly built up bubbles of corporate debt and commercial real estate derivatives larger than the mortgage-debt bubbles which blew out back then; and default rates and bankruptcy rates are now rising sharply in those bubbles. A scared Federal Reserve has not raised interest rates enough, yet, to trigger the crash that the IMF, for example, is warning of; but by postponing the crash trigger, it is only making it more economically devastating when it comes.
President Trump’s policy of cooperation with Russia and China, for peace and mutual benefit, is right, and must be defended against all the attacks on him for it. But it will not survive the chaos of another trans-Atlantic financial crash. And he does not have the American economic revival plans he said he had, to head such a crash off.
Action must be mobilized rapidly, ultimately by the American people and their organizations.
First, the Glass-Steagall separation of commercial from investment banking must be reinstated, with beginning effect immediately, to break up Wall Street’s gigantic speculative casinos.
Since the Glass-Steagall Act began to be torn down 50 years ago, Wall Street’s banks and funds — with their most dangerous operations always in London! — have been a succubus on the economy, which can’t grow without financial crashes, and since the 2008 crash can’t grow at all. The Glass-Steagall breakup must start now, to prevent the threatening new bank crash.
Then, credit must be issued from a national credit institution — see Editor Lyndon LaRouche’s “The Lost Art of the Capital Budget” republished in EIR for July 21 — credit soon in the trillions, for 20-25-year periods at low interest rates.
The purpose is high-technology investments in new, more productive infrastructure to replace the crumbling sinews of the U.S. economy, raise productivity and create productive employment again. It cannot and will not be done by private investment. President Trump must learn this, and the Wall Streeters around him like the Treasury Secretary, have to go.
A great expansion of the United States space exploration program will drive this revival, as the President had stated in a television message to the American people in March.
But facing this threatening financial crash, and meeting this emergency with action, now depends primarily on the American people effectively demanding these actions, as if it were the last weeks of a Presidential political campaign.
Then, the President’s intent to cooperate with China and Russia will become a tremendous benefit, especially from the great “win-win” building project — Beijing’s New Silk Road across Eurasia and Africa. Let such high-speed rail corridors, for example, be built across North America. The United States is potentially a full partner in the Belt and Road Initiative.
First Wall Street, in both the Congress and the Administration, must be beaten and broken up, to prevent it from permanently destroying what remains of American industrial economy and scientific capability.