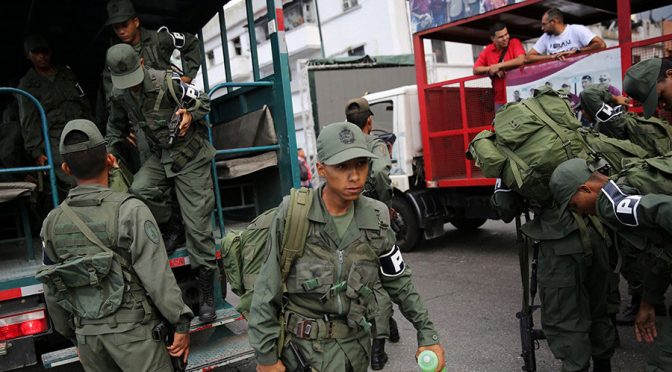 Venezuela has begun massive wargames to show Donald Trump that it is capable of defending itself against US aggression. The drills will involve 200,000 troops and thousands of civilian volunteers, the military said.
The number of participants in the exercise starting Saturday will exceed 900,000 people, Remigio Ceballos, head of the Venezuelan Strategic Operational Command, told the media.
There’ll be around 200,000 servicemen taking part, with the rest of those drilling being members of the Venezuelan civilian militia, Ceballos said.
The National Bolivarian Militia was created by the late Venezuelan leader, Hugo Chavez, in 2009. The force, which allows every citizen to enlist, answers directly to the country’s president.

According to Ceballos, the number of those willing to become a militia member has sharply increased since the current drills were ordered in mid-August by President Nicolas Maduro.

The announcement of the massive exercise came in response to Donald Trump saying that Washington has prepared a range of measures against Venezuela, “including a possible military option if necessary.”
“The fundamental objective for this exercise is to prepare the people for defense,” Ceballos said.

The wargames will take place across the country, including the border areas, the commander added.
The National Bolivarian Militia held a similar 500,000-strong drill in January after the American authorities prolonged the 2015 decree that labeled Venezuela a threat to the US.
On Friday, the White House announced a new batch of sanctions against Venezuela, which for the first time targeted the country as a whole, but not Maduro and his associates.

The restrictions focused on the new bonds issued by the Venezuelan government and dealing with the state-run Venezuelan oil company, PDVSA.
The tough measures threaten the Latin American state with default as Venezuelan Foreign Minister Jorge Arreaza blasted the move as “the worst aggression towards Venezuela in the last 200 years.”
The US has labeled President Maduro a dictator over his handling of the political crisis in the country, which has seen over a hundred people killed in clashes this year.
Maduro has blamed Washington for attempting to destabilize the country and working to remove him from power.
On Thursday, he addressed the country’s top military brass, reminding the armed forces of their oath of allegiance.
“We must be clear, especially for the youth in the military, that we must close ranks within the homeland – that this is no time for any fissures and that those with doubts should leave the armed forces immediately,” he said.
“You are either with Trump and the imperialists, or you are with the Bolivarian national armed forces and the homeland. Never before has Venezuela been threatened in such a way,” the President added.
Trump not ruling out the “military option” in Venezuela may “probably help and strengthen Maduro more than anything else,” analyst and author Gregory Wilpert told RT.
“Such comments reinforce the Maduro government’s argument that Venezuela is under threat from the US,” he said.