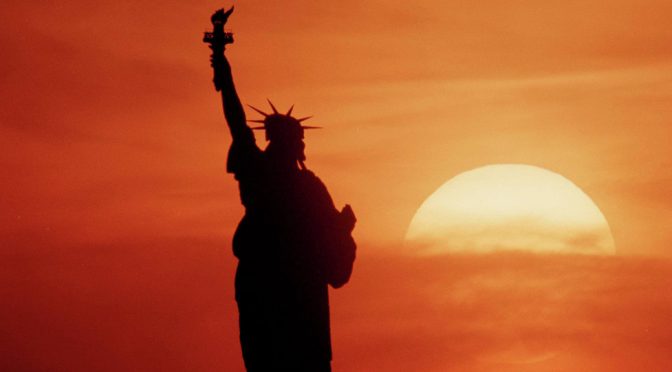 May you live in interesting times, goes the Chinese proverb. Few can doubt that we are indeed living in such an interesting time. Big changes are afoot in the world, it seems.
None more so than the collapsing of the American Empire.
by Finian Cunningham
The US is going through an historic “correction” in the same way that the Soviet Union did some 30 years ago when the latter was confronted with the reality of its unsustainable political and economic system. (That’s not meant to imply, however, that socialism is unviable, because arguably the Soviet Union had fatally strayed from its genuine socialist project into something more akin to unwieldy state capitalism.)
In any case, all empires come to an end eventually. History is littered with the debris of countless empires. Why should the American Empire be any different? It’s not. Only arrogant “American exceptionalism” deludes itself from the reality.
The notable thing is just how in denial the political class and the US news media are about the unfolding American crisis.
This is partly where the whole “Russiagate” narrative comes into play. Blaming Russia for allegedly destabilizing US politics and society is a cover for denial over the internal rot facing the US.
Some may scoff at the very idea of an “American Empire”. That’s something Europeans did, not us, goes the apologist for US power. The quick retort to that view is to point out that the US has over 1,000 military bases in more than 100 countries around the world. If that is not a manifestation of empire then what is?
For seven decades since the Second World War, “Pax Americana” was the grandiose name given to US imperial design for the global order. The period was far from peaceful as the vainglorious name suggests. Dozens of wars, proxy conflicts and violent subversions were carried by the US on every continent in order to maintain its empire. The so-called “global policeman” was more often a “global thug”.
That US empire is now teetering at the cusp of an emerging multipolar world order led by China, Russia and other rising powers.
When US leaders complain about China and Russia “reshaping the global order” to reflect their interests what the American leaders are tacitly admitting is the coming end of Washington’s presumed hegemony.
Rather than accepting the fate of demise, the US is aggressively resisting by denigrating China and Russia’s power as somehow illegitimate. It’s the classic denial reaction of a sore loser.
So, what are the telltale signs that the US is indeed undergoing a seminal “correction” — or collapse?
The heyday of American capitalism is well passed. The once awesome productive system is a skeleton of its former self. The rise of massive social poverty alongside obscene wealth among a tiny elite is a sure sign that the once mighty American economy is chronically moribund. The country’s soaring $20 trillion national debt is another symptom of chronic atrophy.
Recent self-congratulatory whooping by President Trump of “economic recovery” is like the joy felt from looking at a mirage. The roaring stock market is an elite phenomenon which can just as easily slump over night.

Great jobs numbers and finally, after many years, rising wages- and nobody even talks about them. Only Russia, Russia, Russia, despite the fact that, after a year of looking, there is No Collusion!

What the champagne bubbles can’t disguise is the structural failing of US capitalism to reverse exploding inequality and endemic poverty across America. The national prowess of US capitalism has been superseded by global capitalism where American corporations among others scour the planet for cheap labor and tax havens. There is no going back to a supposed golden age, no matter how much Trump crows about “America First”.
The other side of the coin from historic US economic demise is the concomitant rise in its militarism as a way to compensate for its overall loss of power.
It is no coincidence that since the end of the Cold War following the dissolution of the Soviet Union, US military interventions around the world have erupted with increased frequency and duration. The US is in a veritable permanent state of war actively deploying its forces simultaneously in several countries, particularly in the oil-rich Middle East.
Washington of course gives itself a fig leaf cover by calling its surge in militarism a “war on terror” or “defending allies”. But, increasingly, US war conduct is seen for what it plainly is — violation of international law and the sovereignty of nations for the pursuit of American imperial interests.
In short, the US is patently lashing out as a rogue regime. There’s no disguising that fiendish fact.
In addition to waging wars, bombing countries, sponsoring terrorist proxies and assassinating enemies at will with drones, Washington is increasingly threatening others with military aggression. In recent months, North Korea and Iran have been openly threatened based on spurious claims. Russia and China have also been explicitly warned of American aggression in several strategic documents published by the Trump administration.
The grounds for American belligerence are baseless. As noted, the real motive is to do with compensating for its own inherent political, economic and social crises. That then amounts to American leaders inciting conflicts and wars, which is in itself a grave violation of international law — a crime against peace, according to Nuremberg principles.
The American Empire is failing and flailing. This is the spectacle of our time. The Western mainstream news media are either blind, ignorant or complicit in denying the historic collapse. Such media are indulging reckless fantasies of the US political class to distract from the potential internal implosion. Casting around for scapegoats to “explain” the deep inherent problems, the political class are using Russia and alleged Russian “interference” as a pretext.
World history has reached a foreboding cross-roads due to the collapsing of the American Empire. Can we navigate a safe path forward avoiding catastrophic war that often accompanies the demise of empires?
A lot, it seems, depends on ordinary American people becoming politically organized to challenge their dysfunctional system run by and for the elites. If the American people cannot hold their elites to account and break their corrupt rule, overhauling it with something more equitable and democratic, then the world is in peril of being plunged into total war. We can only but wish our American brothers and sisters solidarity and success.
https://sputniknews.com/columnists/201802251061983205-us-collapse-spectacle-of-our-time/

32 thoughts on “US Collapse – the Spectacle of Our Time”