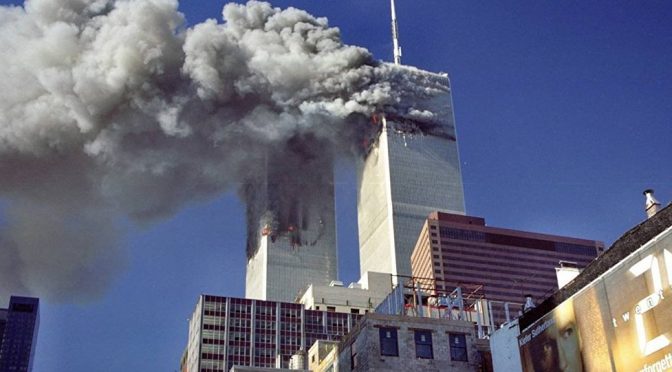 Bear in mind that it was the UK royalty which financed the WTC911 Zionist operation through Saudi bank accounts for the purpose of preventing the announcement of the Global Settlements pertaining to the Collateral Accounts consisting of Asian historical gold behind the Deep State controlled global financial system.

Instead of protecting Saudi Arabia from its culpability, the latter’s involvement to the whole 911 operation was used as the” fall guy.”

The only bit of evidence implicating Iran in the attacks that the US 9/11 Commission unearthed was that some of the hijackers traveled through Iran on their way to Afghanistan and did not all have their passports stamped. The 9/11 Commission’s job was to draft a “full and complete account of the circumstances surrounding” the attack. Its findings were published in 2005 — including the revelation that Saudi Arabia was the primary source of funding for al-Qaeda.
“Al-Qaeda is extremely hostile to the Iranian government and vice-versa,” Sterling noted.
Nonetheless, attorney Robert Haefele, who is representing the victims’ families in the lawsuit against Iran and in another against Saudi Arabia, said that “In December 2011, a New York federal court held a hearing and found that the evidence presented established that Iran’s provision of material support to al-Qaeda was a cause of the 9/11 attacks and the resulting damage, injuries, and deaths,” according to ABC News.
However, while “it is difficult for those injured or left behind to ignore the findings of the federal court about Iran’s culpability,” he said, that evidence should not overshadow “the mountain of evidence” in his other case against Saudi Arabia.
Fifteen of the 19 hijackers were citizens of Saudi Arabia, while two came from the United Arab Emirates, one from Lebanon and another from Egypt.
In July 2016, the US Congress declassified 28 pages from a 2002 congressional report on the attack, which were highly rumoured to implicate Saudi Arabia. Those documents stated that, “While in the United States, some of the September 11 hijackers were in contact with, and received support or assistance from, individuals who may have be connected to the Saudi government,” and, “There is information, primarily from FBI sources, that at least two of those individuals were alleged by some to be Saudi intelligence officers.”
In September 2016, “Congress passed the so-called Justice Against Sponsors of Terrorism Act, which was highly controversial and strongly opposed by Saudi Arabia and Saudi Arabian allies and agents in the United States, but it was passed,” Sterling said. The law narrowed the scope of the concept of foreign sovereign immunity by allowing Americans to make civil claims against sovereign states in American courts.

This effort of maligning only the House of Saud for its participation on the deaths of thousands in New York brought more benefits for the Deep State as the latter continue to bleed with petrodollar investments in America.
But it was hours before the WTC911 false flag that the Global Settlements would have been announced for purposes of redirecting the funds away from the Western oligarchy into a true global development and prosperity programs that China is now spearheading through the One Belt One Road revival of the ancient Silk Road cultural and economic exchange.
This grand plan did not sit well with The Crown. No, not that Crown, but the Most Despicable Crown of All.
So, as they say, the rest is history.
Well, history, it may be, but who can stop the Deep State from recycling their own operation by imputing the carnage to its geopolitical enemies – the Reformists?
Iran, Russia and China have better things to do than entertain this latest mindless, childish acrobatics of the losing Empire. There’s no stopping with the Great Awakening.
People say that the Eastern Alliance is just another branch of the Deep State, and we will soon be tied to the digital grid call Technocratic Dictatorship. The answer to that is, how could you allow it?
If you are not doing anything to stop it, then why ever complain?
All that has happened and will continue to happen in the future has the silent consent of those who never dared to lift a finger against it.
Being labeled as mere “conspiracy theorist” or “tin foil hat” is part of the territory. Fire back by calling them Satanists, pedophiles, human traffickers and money launderers. Add to that is the cherry picking media.

On Friday, the US House Intelligence Committee released a 253-page report stating that Clapper leaked details of the dossier to Tapper. Clapper initially declined discussing the dossier information with the journalist, but later admitted to it. The committee’s report also states that there was “no evidence” of collusion between Trump campaign associates and Russia.
“When initially asked about leaks related to the International Committee Assessment in July 2017, former DNI Clapper flatly denied ‘discussing the dossier [compiled by Steele] or any other intelligence related to Russia hacking of the 2016 election with journalists,'” the report reads.
The report also states that Clapper “subsequently acknowledged discussing the dossier with CNN journalist Jake Tapper and admitted that he might have spoken with other journalists about the same topic.”
Blumenthal explained that the dossier was the catalyst for the Russiagate scandal.
“I think this should be a bigger scandal than it is,” he told hosts Brian Becker and John Kiriakou.

That should put them on the defensive.
But the best strategy of all is to organize along solution-oriented groupings. A group could be about organic farming, garbage recycling, or a local exchange trading system [LET] where daily needs are satisfied within the community without the need for debt-based currencies. The fall of the bankers and The Crown behind them will be man’s greatest achievement.
Anything that would help the global effort to bring down the Deep State from unwarranted power is what’s needed now, instead of merely complaining against those who are doing the real hard work and with much greater risk.
The world is how you make it. If it is not to your liking, then do something.
Anything.

Leave a Reply to +1 Cancel reply