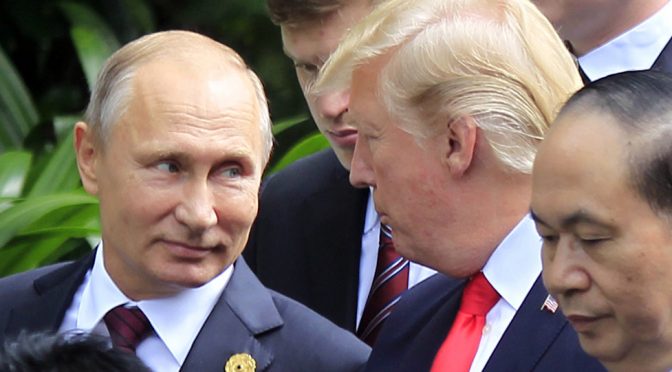 There’s a reason to be optimistic as the two leaders of two Cold War superpower antagonists have their leaders displaying a certain level of mutual respect, and so is the case between both peoples in matters of global concern, in spite of the wild acoustics coming from the Old Mainstream Media.
Although we’ve been very skeptical about the current US administration about its rhetoric, the events on the ground suggest that advanced information were shared prior to the actual bombings in Syria, and the purely theatrical display of US military might in Afghanistan more than a year ago, which enabled the targets to prepare.
In those instances no major civilian casualties were reported. This explains why the Deep State media are still not satisfied with Trump’s militarist action, and they want him out before they lost their privileged social standing, as covert operators are systematically exposing their darker side for everyone to see.
Here are some of the Deep State media headlines illustrating those frustrations:

Globalists Are in Panic Mode Because of ‘Putin-Trump Summit’

Judging by the reaction of the US mainstream media, the world, as we know it, will end in July when Donald Trump meets Vladimir Putin in Helsinki. Pundits fear that Putin and Trump will strike a deal that will ruin the current world order.
But why do they think that a deal between the US president and the Russian leader is a bad thing? Why do they say that leaving Putin and Trump unsupervised in the same room is a “doomsday scenario”? Their reasons have nothing to do with American interests. The US media and its “expert community” is nothing more than an external marketing and PR department for the US military-industrial complex and peace is bad for its business. The Helsinki summit is literally a chance to stop a new Cold War, and therefore is a nightmare for the “Washingtonian swamp” that Trump promised to drain.
The US media wants to portray Trump as someone too inept and too vulnerable to go toe to toe with Putin. Politico believes that “the contrast troubles Russian experts and former U.S. officials who worry the president is liable to make promises to a Russian autocrat he seems eager to please.”
The Hill is concerned that “it’s not clear Trump is looking for a confrontational summit with the Russian leader,” and quotes Nile Gardiner, director of the conservative Heritage Foundation’s Margaret Thatcher Center for Freedom, who believes that “there’s no point in having a summit unless you’re going to stand up to Putin.”
For Slate, the whole idea of a friendly or even neutral summit with the Russian leader is offensive: “Most U.S. allies dread the meeting because all signs suggest that Trump views it not as a session to clear misunderstandings and reduce tensions on issues where the two sides have common interests (military and intelligence officers have these sorts of discussions routinely), but rather as a summit to build trust and friendship where there is no basis for either.”

The bad news for the Russophobes is that Trump wants to meet Putin not because he likes him, but mostly because he needs Russian cooperation on a crucial issue. Namely, without Russian cooperation there is absolutely no way Trump can put an economic stranglehold on Iran and keep the oil price comfortable for the US economy.
Let’s face it, Russia is a key player in OPEC, even if Russia is not a formal member of the organization. Only OPEC (mostly Saudi Arabia) and Russia have some spare oil production capacity to cushion the price shock of Trump’s sanctions in Iran. The Trump administration insists that all US allies across the globe must reduce their oil imports from Iran to literally “zero” by November. According to Reuters, “a senior State Department official said this week that countries will need to cut their imports of Iranian oil to zero from November and exemptions are unlikely.”
Without additional production from OPEC and Russia, the sanctions will push the global oil price to new highs. Trump tried and failed to obtain a unilateral output increase from Saudi Arabia.
Because of the so-called “OPEC+Russia deal,” Riyadh can’t unilaterally increase production without breaking the newly established oil megacartel. Washington needs the Kremlin’s cooperation and judging by the statements made by John Bolton during a recent CBS interview, the so-called “Crimean issue” may be a part of a “deal” offered to Russia.

Bolton indicates Trump is open to recognizing Crimea, which was illegally invaded by Russia in 2014, as part of Russia.

After Brennan points out that "that's shocking for our European allies," Bolton says, "the president makes the policy, I don't make the policy." pic.twitter.com/GKEXg6Y122

It’s important that Trump seems to know more about Crimea than the average American “expert on Russia.” For instance, he knows that Crimeans are Russian-speaking. Maybe, while preparing for the Helsinki summit he will find out that American volunteers fought for Russia against the British Empire during the Crimean War; so siding with Moscow on Crimea would be a historically justified position for the US president. According to a British historian and writer known for his works on Russian history, Orlando Figes, “a US military delegation (including George B. MacClellan, the future commander of the Northern army in the early stages of the Civil War) went to Russia. American citizens sent arms and munitions to Russia. The Americans went to the Crimea to fight or serve as engineers on the Russian side.”

A pro-Russian stance on Crimea has a long history in the US. Moreover, none of the Russophobes who advocate war with Russia (a cold, hot or an economic one) over Crimea can explain why and how such a confrontation would serve American national interests. Those same Russophobes also tend to misrepresent the interests of people like George Soros, who played a big role in the Ukrainian coup, as well as the interests of the American people. Trump has a unique chance to radically deescalate the relationship between Washington and Moscow. It remains to be seen whether Trump is able and willing to use that chance. However, even a small step towards deescalation is infinitely better than a small step towards conflict.

There’s also another media release from the Russian science community, on top of the previous announcement about an industrial method to transmute elements into precious metals economically.

But all of these covert anti-Deep State actions and high profile agreements cannot be used as an excuse for civilian inaction.
True freedom can never be demanded from those whom power is wielded, but by wielding one’s own power to change the trajectory of the current paradigm.
In the final analysis, we all deserve the type of leadership we have.